Last week in the House of Assembly, elected leaders delayed the Consumer Protection Bill and other government business and spent at least 10 hours debating a motion to “reprimand” Governor …

END_OF_DOCUMENT_TOKEN_TO_BE_REPLACED 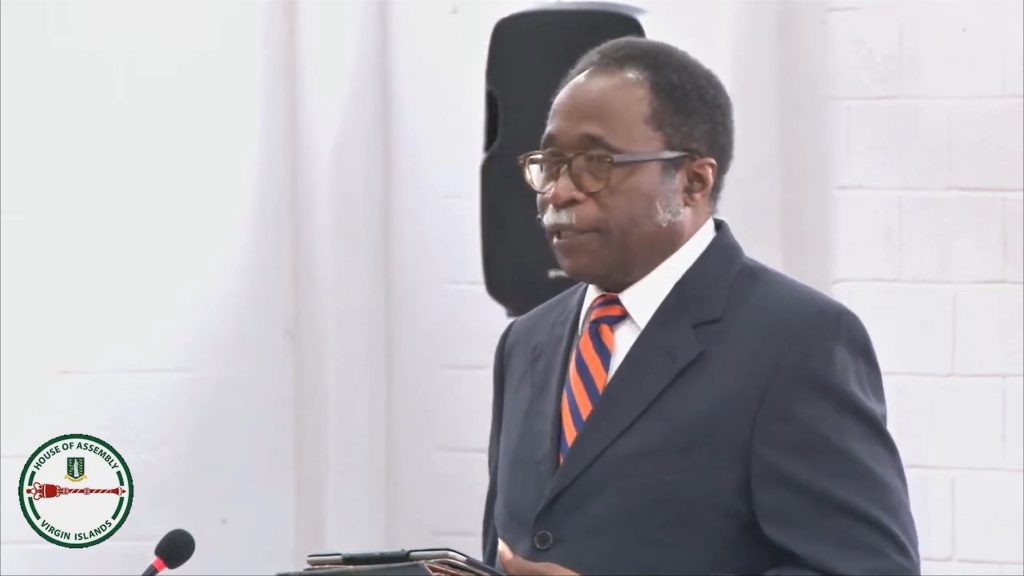 Opposition member Julian Fraser presents a motion to reprimand Governor Gus Jaspert concerning an ongoing dispute about the governor’s treatment of the auditor general’s special report on the failed BVI Airways deal during a House of Assembly session on May 28. (Photo: PROVIDED)

Last week in the House of Assembly, elected leaders delayed the Consumer Protection Bill and other government business and spent at least 10 hours debating a motion to “reprimand” Governor Gus Jaspert before ultimately voting it down.

The motion, which initially was introduced by opposition member Julian Fraser on May 28, concerned an ongoing dispute about the governor’s treatment of the auditor general’s special report on the failed BVI Airways deal.

The Audit Act 2003 requires the auditor general to submit such reports to the governor, premier and financial secretary, and it requires the governor to “cause” them to be laid before the HOA within three months of receiving them.

Mr. Jaspert claims he followed the rules: He received the report on Feb. 7, he said, and provided it to Cabinet on April 23, giving the elected members of Cabinet the required 10 days to call an HOA meeting by May 7.

Instead, however, no HOA meeting was called until May 28, when Premier Andrew Fahie laid the report on the table about three weeks after the deadline required by the Audit Act.

Mr. Fahie has blamed the governor for the delay, starting with an April 23 complaint to the United Kingdom that appears to have been written under the misunderstanding that Mr. Jaspert received the report on Jan. 27— the day it is dated — instead of Feb. 7.

Mr. Jaspert quickly responded, claiming that the premier’s complaint was based on erroneous information.

But Mr. Fahie stuck to his guns, explaining that even if Mr. Jaspert received the report on Feb. 7, he didn’t provide it to Cabinet in time for members to properly consider it and bring it to the HOA by May 7 — an assertion disputed by Mr. Jaspert.

On May 28, opposition member Julian Fraser put forward a motion to “reprimand” the governor for the alleged delay in providing the report to Cabinet.

In the motion, Mr. Fraser claimed that the special report was laid more than a month past the statutory deadline outlined in the Audit Act, basing his argument on the fact that the report was dated Jan. 27 and finally laid on May 28.

Mr. Fraser said he found it troubling and insulting that the governor waited so long to submit the report to Cabinet.

The motion kicked off an hours-long discussion about whether Mr. Fraser could bring forward the motion considering that the BVI Airways deal is now a criminal investigation and can’t be debated in the House.

However, Mr. Fraser argued that the timeline for tabling the report was a separate issue from the contents of the report, and Speaker of the House Julian Willock agreed, allowing Mr. Fraser to read his motion.

Members then proceeded to debate its substance on May 28, June 3 and until the vote was called on Friday.

Meanwhile, the speaker, supported by the premier, solicited legal opinions about the details of the motion from two outside legal sources and later from Attorney General Baba Aziz, who typically provides legal advice for issues raised during HOA.

Mr. Willock sought answers about whether or not the House has the power to reprimand the governor, and whether the reprimand would be simply symbolic or have teeth in potentially asking that the governor be removed from office.

Both outside opinions — which Mr. Willock provided to the press — affirmed the House’s ability to introduce and pass the motion.

VI-based firm DenJen Law said in a June 3 opinion that although the HOA has no power to directly remove the governor, it “may pass a resolution noting its disagreement with or disapproval of the actions or omissions of the governor in council, effectively reprimanding the governor. Such resolution may or may not ask for the governor to be recalled.”

Mr. Ramlogan noted that the VI follows British legislative tradition, which “dictates that on the failure of an event happening within a directed timeframe, any member may announce the failure and call for rectification.”

However, he added, only the Queen can unseat the governor.

Mr. Ramlogan also said the HOA can debate a censure motion, highlighting a governor’s breach of duty, after which the speaker would admonish him.

“[The motion] is of immense political and democratic symbolic value and can form a strong foundation for a formal request to Her Majesty to recall the governor’s appointment,” the opinion states.

Mr. Ramlogan is currently facing trial in Trinidad for allegations of accepting legal fee kickbacks and money laundering, which he denies. Mr. Willock previously sought input from him last year to resolve a dispute with District Four Representative Mark Vanterpool.

Mr. Aziz, who said he received notice of Mr. Willock’s request for advice on the motion the evening before the June 3 HOA meeting, differed with the speaker and the other two lawyers on some points.

“I did hear the speaker mention that the House of Assembly is sovereign,” Mr. Aziz said, noting his dissent. “In the Virgin Islands, our written Constitution is supreme.”

He added on Friday that the HOA does not have any penal powers to wield against non-members for obstructing the House’s duties under the Constitution.

But he also said it is important to consider the jurisdictional aspects of reprimanding the governor that are outlined in the Constitution.

In the act outlining the powers of the HOA, Mr. Aziz pointed to a provision that says anyone who impedes the House’s duties “shall be guilty of an offence and shall on summary conviction before a magistrate be liable to a fine of $500 or to imprisonment for six months or both.”

He argued that the HOA therefore waives its jurisdiction in punishing non-members, giving that power to the court system.

HOA members debated Mr. Fraser’s motion in depth on June 3 and on Friday.

Opposition members Melvin Turnbull (R-D2) and Marlon Penn (R-D8) said they supported Mr. Fraser’s right to bring the motion, but they found it difficult to criticise the governor for any delays in bringing the BVI Airways report when members of the House have yet to bring reports on issues such as former festival budgets that are now years late.

“We need to look in the same mirror,” Mr. Turnbull said. “We are our own worst enemy.”

Debate then broadened to the importance of building the HOA up as a respected independent institution, especially as the territory prepares for a constitutional review.

Education, Culture, Youth Affairs, Fisheries and Agriculture Minister Dr. Natalio “Sowande” Wheatley supported the “historic” motion reprimanding the governor because he said it is important to put the House’s displeasure in writing, even if the act of doing so causes members discomfort.

“We know that this is not going to be prosecuted in court, and he will likely not be removed based on this simple act,” Dr. Wheatley said. “But we need to have it acknowledged.”

When the issue came to a vote, only Mr. Fraser and Dr. Wheatley voted in favour. The remaining members voted no, except Trade and Economic Development Junior Minister Shereen Flax-Charles, who was temporarily absent for the vote.

Mr. Willock also took issue with the governor recommending that Mr. Fahie convene HOA by May 7 in order to meet the statutory deadline for laying the report on the table within three months.

Mr. Willock said he believed Mr. Jaspert’s recommendation wasn’t in line with the separation of powers between the executive and legislative branches.

“It is unusual that anyone will be suggesting a specific date for a HOA sitting, unless there is a conversation with the speaker, which usually includes the clerk and the leader of government business,” he wrote in an April 28 letter to the governor, which he subsequently provided to the public.

In a Tuesday statement, however, Mr. Jaspert reiterated that he received the report on Feb. 7 and maintains that he referred the report to Cabinet by April 23 with the intention of it being brought to the House by May 7.

“With the focus rightly on our response to Covid-19, this report has understandably taken a while to reach the point of being laid, but I am pleased that the report has now been laid before and discussed by the House of Assembly,” Mr. Jaspert said.

The governor previously stated that the auditor general operates independently, and Cabinet did not need to make any changes before presenting it to the HOA, where it could be publicly debated.

However, when Mr. Fahie laid the report on the table on May 28, he said the criminal investigation into the deal meant members of the House could not debate the report.

In the wake of the report’s publication and the initiation of criminal proceedings, the governor said work is under way to reform public service transformation initiatives. This includes introducing a new Integrity in Public Life Act, revising procurement legislation, creating a new ministerial code, and clarifying Public Service Management codes and policies.

“To bolster the current legislation, this territory needs to implement more rigorous and transparent processes to safeguard our public finances and remain accountable to the public,” he wrote. “I look forward to working closely with the government to progress this shared agenda.”

His office declined to comment on matters discussed in the House.