Despite a packed legislative agenda, a House of Assembly sitting was adjourned on Tuesday after concerns were raised about various technical “violations” in how the session was scheduled and held. …

END_OF_DOCUMENT_TOKEN_TO_BE_REPLACED 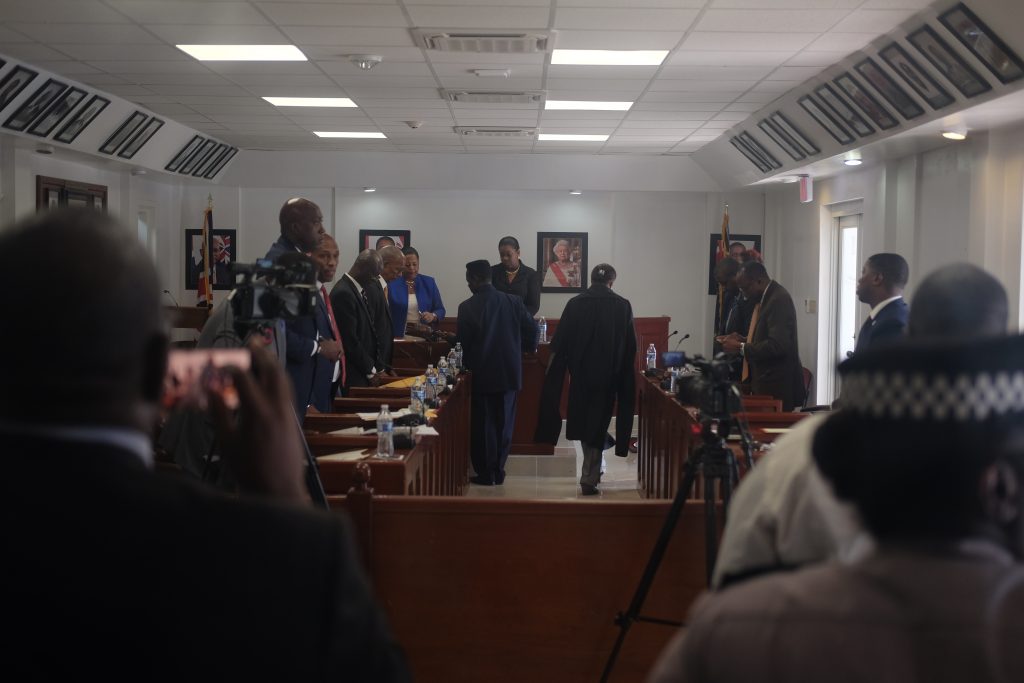 A House of Assembly sitting was adjourned on Tuesday after concerns were raised about violations of standing orders. (Photo: AMANDA ULRICH)

Despite a packed legislative agenda, a House of Assembly sitting was adjourned on Tuesday after concerns were raised about various technical “violations” in how the session was scheduled and held.

During the sitting — which began about an hour after it was originally scheduled to start — Speaker of the House Ingrid Moses-Scatliffe read a letter that Opposition Leader Andrew Fahie had written, detailing what he believed to be “ongoing” breaches of various sections in the standing orders that govern HOA proceedings.

Two sections of standing order eight stipulate that a clerk must give the notice paper for a sitting to each member of the House at least ten days in advance, and also must provide an order paper at least five days before the sitting.

However, members were not notified about the date for Tuesday’s sitting until Nov. 19, only eight days in advance. Mr. Fahie argued that the sitting was therefore illegal.

“So anything that happens here today, anybody in the public or anyone else can legally ask for it to be overturned,” he said.

Ms. Moses-Scatliffe told the opposition leader that on Nov. 15 — when a sitting was held mainly to pay tribute to the late legislator Delores Christopher — she had asked Premier Dr. Orlando Smith “multiple times” when the next session would be held. She continued to remind Dr. Smith every day after that, she said.

Finally, on Nov. 19, the premier advised that the next sitting should be held on Nov. 27. That same day, Ms. Moses-Scatliffe notified members of the sitting’s date, she said.

“I will add that in all instances I have advised the premier, as the leader of government business, of the potential and actual breaches to the standing orders and the need to comply so as to ensure that the standards of the House of the Assembly are always maintained,” she said.

In his letter to the speaker, Mr. Fahie also referenced a section of standing order ten, which states that a sitting should begin at 10 a.m., “or at such other time as the speaker may from time to time determine.”

On Tuesday, several legislators arrived about an hour late after attending a ceremony for Sharleen DaBreo, director of the Department of Disaster Management, who was awarded as a Member of the Order of the British Empire.

Members of the public often tune in to proceedings, whether on the radio or online, and some even “religiously” attend HOA sittings in person — even though legislators themselves sometimes have difficulty arriving on time, she added.

“It’s really a disservice to the House, to myself, to yourselves as members [and] to the public, that we have no respect for what we call the highest institution in the territory,” she said.

The premier apologised for being late, but added that it was a “special day” for Ms. DaBreo.

“I thought, Madam Speaker, it was fitting for as many members as possible to attend,” he said.

“I personally feel that to sit through this sitting — this illegal sitting — is also lending credence to the behaviour of this House,” he said.

After a recess that lasted about three hours, the premier requested that portions of standing order eight — which outline the proper timeframes for providing notice and order papers — be suspended. Under standing order 89, an order can be suspended on a motion made by a member, either after notice or with leave of the speaker.

Speaker Ms. Moses-Scatliffe denied the request, and at least one legislator could be heard commenting on the decision.

“So with that said I am not granting leave and today’s session, for lack of a better word, is now adjourned,” she said.

As of Beacon press time yesterday afternoon, no date had been announced for the next HOA sitting.