With 10 votes in favour and one absence from Health and Social Development Minister Carvin Malone, the House of Assembly unanimously passed a no-confidence resolution on Thursday calling to revoke …

END_OF_DOCUMENT_TOKEN_TO_BE_REPLACED 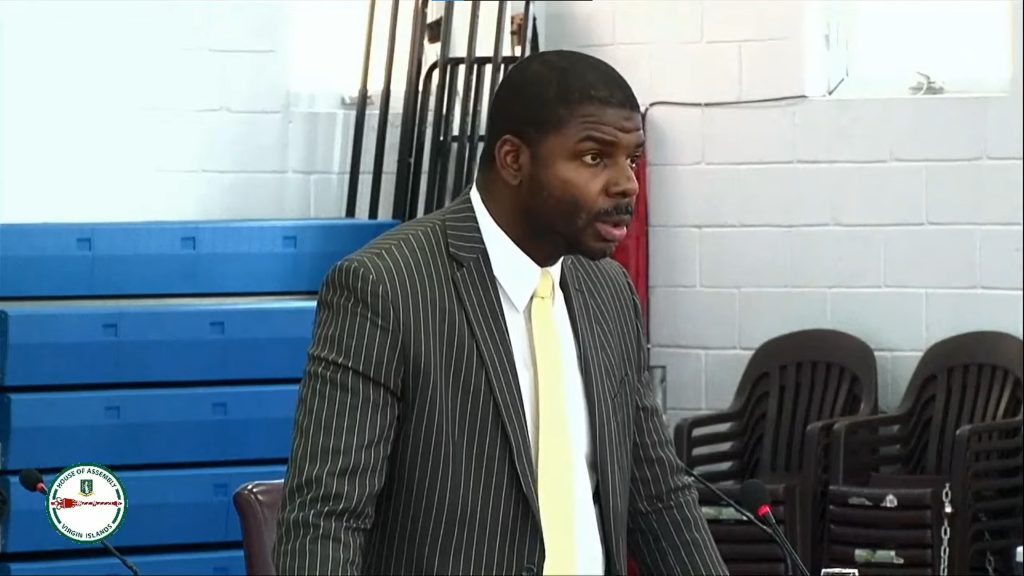 Acting Premier Dr. Natalio “Sowande” Wheatley read a resolution in the House of Assembly this morning stating that members declare a lack of confidence in Premier Andrew Fahie, who is being detained in Miami on charges of conspiracy to import five kilograms or more of cocaine and conspiracy to launder money. (Screenshot: HOUSE OF ASSEMBLY)

With 10 votes in favour and one absence from Health and Social Development Minister Carvin Malone, the House of Assembly unanimously passed a no-confidence resolution on Thursday calling to revoke Premier Andrew Fahie’s appointment as premier of the territory.

Acting Premier Dr. Natalio “Sowande” Wheatley proposed the resolution that states members lack confidence in Mr. Fahie, who is being detained in Miami on charges of conspiracy to import five kilograms or more of cocaine and conspiracy to launder money.

“I was shocked,” Dr. Wheatley said after reading the resolution, explaining his reaction upon first hearing the news. “I was dismayed. In some instances, I was sickened by what I learned. But quickly, I realised that my focus had to shift to what was in the best interests of the people of the Virgin Islands. It was no longer important for me to consider what was in the best interests of any one person.”

WHEREAS the honourable Andrew A. Fahie was appointed premier, having been recommended by the elected members of the House of Assembly after the 2019 general election in accordance with Section 52.1A of the Virgin Islands Constitution Order

WHEREAS the premier the honourable Andrew A. Fahie has been arrested and charged with money laundering and conspiracy to import a controlled substance into the United States of America

WHEREAS the arrest and charge of the premier, the honourable Andrew A. Fahie, has brought the integrity and sanctity of the role of the premier to public and international disrepute and demonstrates a lack of character and suitability to operate in a public leadership role and manage the affairs of this government

WHEREAS the premier, the honourable Andrew A. Fahie, has not stepped down as premier and remains in custody outside the Virgin Islands and unavailable to perform his functions and lead the government

WHEREAS the Virgin Islands Constitution Order 2007 Section 53.1 provides that “If a motion on the Order Paper that the House of Assembly should declare a lack of confidence in the Government of the Virgin Islands receives in the House the affirmative votes of a majority of all the elected members of the House, the Governor shall, by instrument under the public seal, revoke the appointment of the Premier”

NOW THEREFORE BE IT RESOLVED by the House of Assembly of the Virgin Islands that it does declare a lack of confidence in the government led by honourable Andrew A. Fahie.

Mr. Fahie and BVI Ports Authority Managing Director Oleanvine Maynard were arrested in the United States on April 28 and accused of agreeing to allow cocaine to pass through Tortola ports in exchange for a percentage of the proceeds earned from selling the drugs in the US, according to a criminal complaint filed in the US District Court for the Southern District of Florida.

After reading the resolution on Thursday, Dr. Wheatley noted the concern voiced by members of the financial services and tourism sectors about the future of the territory.

“They would have been very concerned with what they were reading in the international news,” he said, adding, “It is vital … that we take a stand and do what is right for the people of the Virgin Islands.”

He added that Mr. Fahie “has lost the moral authority to lead the Virgin Islands.”

“It does not mean that I condemn him, but it means that he in his private moments will have to pray to the lord and ask for repentance,” Dr. Wheatley added. “He will have to accept the consequences of his actions.”