As the Virgin Islands prepares to celebrate emancipation, elected leaders also turned to the history books this week before greenlighting a constitutional review. Premier Andrew Fahie referenced the political groundswell …

END_OF_DOCUMENT_TOKEN_TO_BE_REPLACED 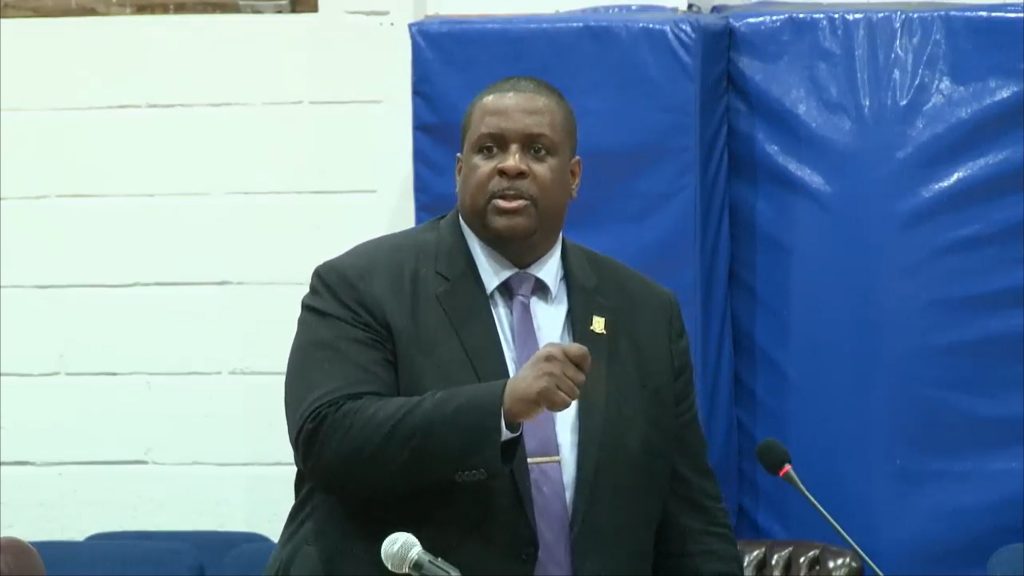 Premier Andrew Fahie lauded this week as an important moment in Virgin Islands history when the House of Assembly voted unanimously to launch a review of the territory’s Constitution, which was last revised in 2007. (Screenshot: HOA)

As the Virgin Islands prepares to celebrate emancipation, elected leaders also turned to the history books this week before greenlighting a constitutional review.

Premier Andrew Fahie referenced the political groundswell that Anegada resident Theodolph Faulkner generated in the late 1940s when petitioning for Virgin Islanders’ rights to lead their own affairs, make their own laws and policies, and manage their own government spending.

“This is what we are fighting for — true self-determination,” Mr. Fahie said Monday in the House of Assembly. “Through the decades and generations, the cry has been, ‘How long?’ And it’s up to us now to say, ‘Not long.’”

Legislators shared their thoughts on retooling the Constitution before unanimously passing a motion on Tuesday night to establish a formal Constitutional Review Committee, which will conduct an in-depth analysis of the document last amended in 2007.

Though constitutional review has been on the national agenda since late 2016, the effort was stalled by the 2017 hurricanes and ensuing recovery efforts, Mr. Fahie explained.

But legislators are now ready to revisit the Constitution that was last altered 13 years ago, resulting in the fifth iteration of the document.

The first written Constitution was drafted in 1950, shifting the power of leadership from the governor of the Leeward Islands to the Legislative Council of the Virgin Islands.

Through the years, the form of government shifted, and the terminology used to describe the VI changed from “colony” to “presidency” to the current “British overseas territory.”

Mr. Fahie said much of the progress in creating a government more representative of VI residents has been driven by community members, particularly in the 1950s.

Still, Mr. Fahie said that for too long, many decisions about the development of the VI have not been in the hands of its inhabitants.

The premier also stressed the importance of redefining the “modern partnership” between the VI and United Kingdom described in the current Constitution.

Mr. Fahie expressed particular concern about one aspect of the 2005 constitutional review, explaining that the UK Foreign and Commonwealth Office’s constitutional advisor gave guidelines for the process.

“It was referred to as a checklist, but it was more like rules of what topics were off limits to the Constitutional Review Committee and the citizens,” he said.

Because of those restrictions, citizens couldn’t fully voice their thoughts on pressing issues at the time, he said, adding that he hopes such restrictions won’t come into play this time around.

Instead, he stated the need for respectful, forthright and transparent discourse as the review process progresses.

On Monday, opposition member Julian Fraser, who seconded the motion and is one of only three current House members who were in office during the previous review, said he was grateful to address the “unfinished business” of retooling the document.

He proposed various ideas, including a new section to precisely define an “indigenous Virgin Islander” for the purposes of establishing constitutional rights.

But he also implored House members, especially the newer representatives, to seize the opportunity to pursue deeper changes.

For instance, Mr. Fraser suggested implementing a two-chamber, or bicameral, system of government. This would entail replacing Cabinet with a senate of seven elected officials to counterbalance the House, he explained, adding that the VI wouldn’t be the first overseas territory to make such a move.

“It makes a stronger legislation,” Mr. Fraser said. “I do not agree with any form of legislator being appointed.”

House members extensively debated issues related to the pending review, including the possibility of pursuing independence from the UK.

Natural Resources, Labour and Immigration Minister Vincent Wheatley made the distinction between “self-governance” and independence, and said that former colonies that sought independence have had to foot hefty bills to do so.

In Mr. Fahie’s concluding remarks late Tuesday night, he added, “It’s time we get what is ours.”

After observing a moment of silence recognising the legacy of the VI’s ancestors, particularly the enslaved people, the House voted in favour of the motion.

Speaker of the House Julian Willock said he plans to work with staff to provide transcripts of the debate to be made widely available as a record of the historic moment.