Though the Covid-19 pandemic slowed work on government’s planned housing complex in Joes Hill, construction is still on track to be completed within the planned three-and-a-half years from when the …

END_OF_DOCUMENT_TOKEN_TO_BE_REPLACED 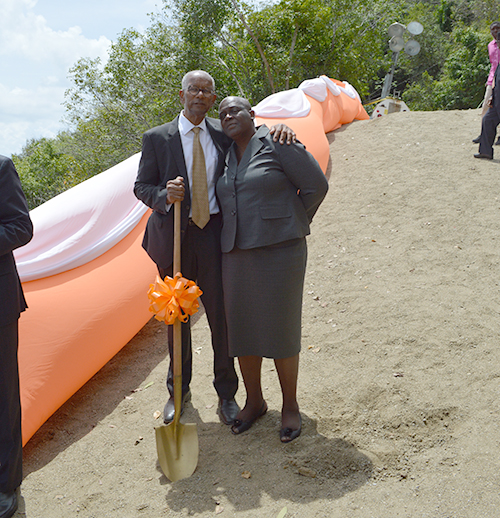 In April 2017, the Social Security Board broke ground on an “affordable housing” project between Joes Hill and Long Bush. The project was delayed after the 2017 hurricanes, but the board signed a contract in May this year and work is under way despite the pandemic. (File photo: CONOR KING DEVITT)

Though the Covid-19 pandemic slowed work on government’s planned housing complex in Joes Hill, construction is still on track to be completed within the planned three-and-a-half years from when the Social Security Board signed a nearly $18 million contract with James Todman Construction Limited on May 28, according to Natural Resources, Labour and Immigration Minister Vincent Wheatley.

“I am pleased to report that construction on 7.414 acres of the Joes Hill property commenced on July 1, 2020,” Mr. Wheatley said Sept. 22 in the House of Assembly.

Government and SSB leaders have promised that the project will provide affordable housing for first-time homeowners, though they have provided few details about how recipients will be selected.

The SSB originally broke ground on the project in April 2017, less than five months before Hurricane Irma devastated the Virgin Islands.

The idea has been in the works since SSB Chairman Ian Smith proposed it following his appointment to the board in October 2015, SSB officials have said.

“The ultimate goal of the initiative is to afford BVIslanders the opportunities to own their homes,” Mr. Smith said in a press release on May 28. “This would lead to the encouragement towards savings and creation of wealth, a future generation of homeowners and independent citizens, which will contribute into the solidification of the foundations of our growing economy.”

The project involves the construction of 25 buildings that include a commercial space and 52 residential units with a mix of one-, two- and three-bedroom options, officials have said.

By the end of last month, “notable progress had been made on the property,” Mr. Wheatley said Sept. 22.

He added that construction crews were able to clear existing roadways, and create a lower entrance in the Long Bush area. They also poured 60 percent of the retaining wall at the Joes Hill entrance, commenced backfilling, and advanced work crafting the foundations for multiple three-storey condos, according to the minister.

This month, crews are working on the lower retaining walls, he added.

“As we are all aware, the imposition of compulsory curfews in the territory due to the Covid-19 pandemic have caused adjustments to everyday living,” Mr. Wheatley said. “Some restrictions were inevitably placed on the worksite and the efforts of the construction crew.”

Staff had to suspend heavy works on the site, focusing solely on backfilling work, he explained.

“Despite these modifications, I have received assurances that the project is not at risk at this stage, as the original construction scheme has enough flexibility built into it to account for possible delays in the supply chain, among other variables, due to the ongoing pandemic,” he added.