In a series of 2017 Facebook videos, British entrepreneur Giles Cadman stands beside the ocean and describes his company’s plan to build a lobster farm next to the protected Beef …

END_OF_DOCUMENT_TOKEN_TO_BE_REPLACED 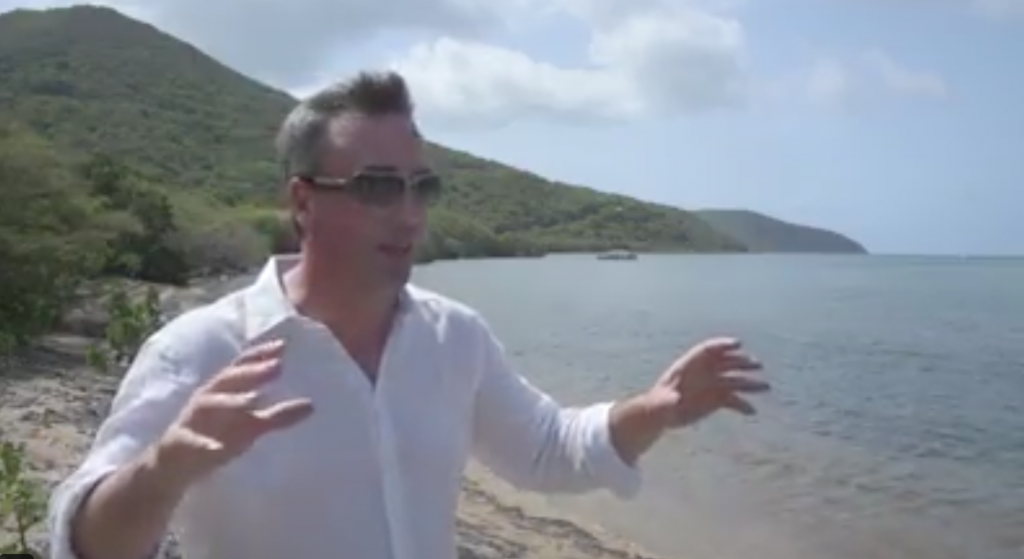 Giles Cadman explains his plan to build a lobster farm next to the Beef Island Channel in a 2017 video posted on Caribbean Sustainable Fisheries’ Facebook page. (Screenshot: CARIBBEAN SUSTAINABLE FISHERIES/FACEBOOK)

In a series of 2017 Facebook videos, British entrepreneur Giles Cadman stands beside the ocean and describes his company’s plan to build a lobster farm next to the protected Beef Island Channel.

“This three-acre farm we expect to produce 200,000 pounds of lobster per acre per year,” he says in one video.

By that calculation, Caribbean Sustainable Fisheries’ planned facility in East End — which was approved in June — would produce nearly 600,000 pounds of lobster annually.

But a CSF brochure dated 2018 appeared to tell a different story: It referenced a planned “new and expanded farm site” employing 40 people full time and capable of holding 70,000 pounds of lobsters, which take more than a year to grow from larvae to adulthood.

And in June of this year, Mr. Cadman provided a number that fell between those two figures, telling the Beacon that the East End facility would produce about 255,000 pounds per year once it is fully operational.

The evolving numbers are not the only changes the company has made to its projections over the years. Some could represent changes to the business plan over time. But others are less easily explained.

In the application’s cover letter, Mr. Cadman states that the plans “revolve around two complementary components.”

“The first is to support local fishermen by purchasing and on-growing lobsters (of a legal size) using its technology to produce lobsters of a high export grade,” the letter explains.

The second component  is a hatchery that would breed lobsters and supply tiny babies known as pueruli “for on-growing and farming and for ultimate sale internationally,” according to the letter.

Then the letter states what CSF won’t do.

“Please note that CSF has no intention of collecting ‘wild’ lobsters, and this does not form any part of CSF’s intended operations,” it notes.

But a few pages later, another section of the application tells a different story.

“We will implement [CSF’s] proprietary sustainable harvest method for catching wild (baby lobsters) puerulus (colloquially called glassies) that have a naturally high mortality rate in the wild and growing them in tanks on land,” it states.

CSF’s environmental impact study seems to support that account, but it provides contradictory information about the size of the baby lobsters to be collected from the ocean.

At least two sections state that they will be harvested in their larvae phase, a spider-like form that precedes their transformation into pueruli, which resemble translucent, fingertip-length adult lobsters.

But another page describes plans to collect only pueruli, adding, “Lobsters will not be harvested at the larvae stage.”

Mr. Cadman didn’t answer the Beacon’s questions about contradictions in the planning application.

CSF has also made apparently contradictory claims about the capacity and production at its existing farm in Pockwood Pond.

A section of the planning application states, “Since 2017, the farm has been producing lobsters to adult size.”

Mr. Cadman, however, told the Beacon in an interview that production started earlier.

He added that the farm held about 30,000 pounds when Hurricane Irma hit that year, all of which died after the storm because someone stole the farm’s generator.

However, the 2018 CSF brochure appears to suggest that the farm, which Mr. Cadman said wasn’t badly damaged by Irma, could only hold around 5,000 pounds of lobster in 2018.

“To meet with the increasing upcoming demand for our product, these current farming facilities are being upgraded to allow for the doubling of farm stock capacity, and we expect to be able to hold 10,000 pounds of lobster at any one time,” the brochure states.

‘Accurate at the time’

Asked about the apparent discrepancies in the capacity and production figures at the two farms, Mr. Cadman stood by past claims.

“You continually confuse holding with production and capacity with water flow,” he wrote in an email. “Needless to say, any statement I have made was accurate at the time. [Research-and-development] progress and breakthroughs change some of the metrics.”

He also explained that the numbers can change for various reasons.

“Each acre of land can produce between 60,000 [pounds] and 600,000 [pounds], depending on factors such as water flow, water depth, staffing levels, automation and whether the tanks are used from glassy to plate or from adult to plate,” he wrote. “Please stop trying to find fault in past statements. The existing farm has been designed to hold 255,000 [pounds] of lobster, which could mean production of 255,000 [pounds] or a million pounds. It will depend on the model. The fact you don’t understand that is because you are journalist and not a businessman or an entrepreneur.”

Asked which facility he meant when he referenced an “existing farm” designed to hold 255,000 pounds, he replied that the number applies to both the planned facility and the existing one, which he has said could be expanded.

“The East End and Pockwood Pond farms were both designed to have a biomass capacity of 255,000 [pounds] in multiples of 18-tank modular arrays,” he wrote. “When we shifted focus from Pockwood Pond to East End, we made adjustments to the design and tank size to be more suitable for the area and added design modifications which we have developed over the years.”

He added that several factors would determine production capacity.

“But to be clear,” he wrote, “we would not be able to hold more than 255,000 [pounds] of lobster at any given time. The farm will never be at capacity because of multiple factors which we have explained several times. This is not binary and it’s not possible to give an absolute answer on any of this.”