Business > How to communicate in a pandemic

How to communicate in a pandemic

Circumstances have changed dramatically for Virgin Islands businesses in recent weeks due to the coronavirus pandemic. Some may have gone from encouraging employees to work from home to shutting down …

END_OF_DOCUMENT_TOKEN_TO_BE_REPLACED 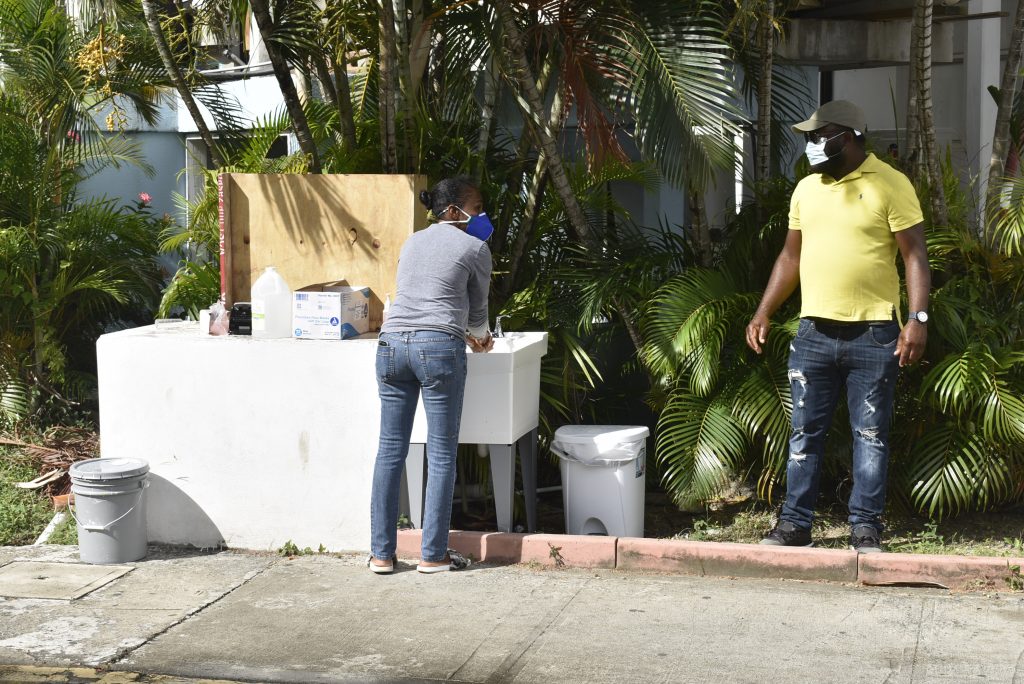 Handwashing stations are set up outside businesses (above, at B&F Medical Centre) back open after the lockdown. A Virgin Islands public relations professional recently offered advice about communicating with customers during the health crisis. (Photo: JOEY WALDINGER)

Circumstances have changed dramatically for Virgin Islands businesses in recent weeks due to the coronavirus pandemic.

Some may have gone from encouraging employees to work from home to shutting down completely to reopening under a drastic new set of rules, all while figuring out how to communicate those changes to customers.

“Employees and customers quickly have to come to grips and adapt to a world that changed dramatically seemingly overnight, and we experienced this firsthand,” Sofia Fay, a partner at Virgin Islands public relations firm Broadsword Communications, said Friday during a webinar hosted by Hire BVI. “We have to become very adaptable.”

Businesses are often awaiting news right alongside their customers, anxiously monitoring the situation not only locally but internationally.

“Apart from the local planning that’s happening in government, what’s happening globally is going to affect a lot of our industries, including the tourism sector, which is a major pillar of our economy here. But we also turn our attention to the local impact of the mandates and protocols that are being put in place as [they] slowly allow businesses to [open],” Ms. Fay said.

When communicating with customers in circumstances that are constantly changing, she explained, building trust is a major goal. To achieve that, getting
staff on the same page is key, according to Ms. Fay.

“You need to make sure that you speak with one voice, and use only one reliable bulletin board that works, so if there’s more of you in your business who are entitled to communicate directly with customers, make sure that they understand what it is that you’re saying,” she said. “You don’t want conflicting or contradictory information coming out.”

Having a central hub for customer information, such as a social media account or website, is an important tactic, she added.

It should be “one place where you regularly update, whether it’s hours of service, products that you have in stock or that you’re running low on, [or] changes to a protocol for when they come into your business [or] how they communicate with you,” Mr. Fay advised.

In the current crisis, certain circumstances — such as opening hours or the number of customers allowed inside — may change suddenly and be beyond a business’s control.

“Try and communicate on topics that you know are less likely to change,” she said. “If you’re making an announcement which is beyond your control, … make sure that you add the caveat [that it might change].”

She added that businesses shouldn’t try to predict the future, even if customers are clamouring for information.

“Be sure that you’re consistent and be transparent about what you do and don’t know,” she said. “If you’re not sure either, don’t talk about it, or make sure that you say, ‘As far as we are aware, this is what we are going to do.’”

According to Ms. Fay, businesses should differentiate between external and internal communication and pay careful attention to their tone.

“Be sensitive, because this has impacted people in all sorts of ways,” she said.

“There are folks who are perhaps not sure quite whether they have a job or not and how they’re going to make ends meet.”

She also advised against dwelling too much on “external information.”

“Many people would have seen news reports,” she said. “So keep that context there, but don’t dwell too much on that because that’s not your communication, your message about your business.”

Ms. Fay also suggested including a date with all communication issued during a fluid situation, especially when it comes to major policy changes, refund policies, cancellation policies, opening hours or anything else that could impact how customers interact with the business.

“You don’t want to have people say, ‘Oh, well, I did see a poster that said I could come in and that all businesses [are] open all night,’ [but] in fact, that switched to 10 o’clock.”

Ms. Fay noted that there are many ways for a business to get out its message, including radio broadcasts, print and online advertising, social media announcements, and press releases.

“So it’s wise to plan,” she said. “But primarily, know your audience, know your customers, know what you want to say, and make sure that what you say to them is relevant to your business.”