Nelda Huggins sprinted to the 40th LIME CARIFTA Games Under-17 Girls 100 metres bronze medal in leading one of the territory’s most successful showings in recent times at the event. …

END_OF_DOCUMENT_TOKEN_TO_BE_REPLACED 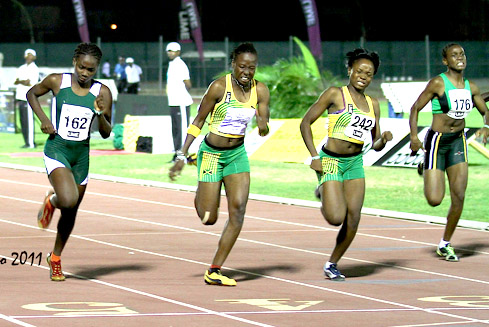 in leading one of the territory’s most successful showings in recent times at the event. While two athletes were in straight finals, four of six athletes who had preliminaries, advanced to the finals, six athletes recorded personal bests, as national youth, junior and scholastic records fell.

Ms. Huggins, a 14-year-old Elmore Stoutt High School third former and one of three 2014 Youth Olympic Games hopefuls on the team, picked up the bronze medal on Saturday when she ran a personal best 11.98 seconds into a -3.4 headwind in the 100 metres, bringing the territory’s total to 20 since 1978. She became just the eighth female athlete in the territory’s history to crack the 12 seconds barrier. Ms. Huggins won her semifinal into a -0.3 headwind in 12.12 seconds.

Taylor Hill was third in heat one of her Under-17 Girls race, which she ran in 12.47 seconds but did not advance. Ms. Hill on Sunday ran a personal best of 24.79 seconds lowering the 24.96 she ran in her last outing. She had a nonadvancing fourth place showing. Ms. Huggins was also fourth in heat three in 25.29 seconds.