Walking to victory at the Humane Society’s 21st Dog Show

In a small open-air pen on the grassy lawn at Captain Mulligan’s at Nanny Cay, dog owners walked in circles with their fluffy friends on a leash.  A girl gently …

END_OF_DOCUMENT_TOKEN_TO_BE_REPLACED 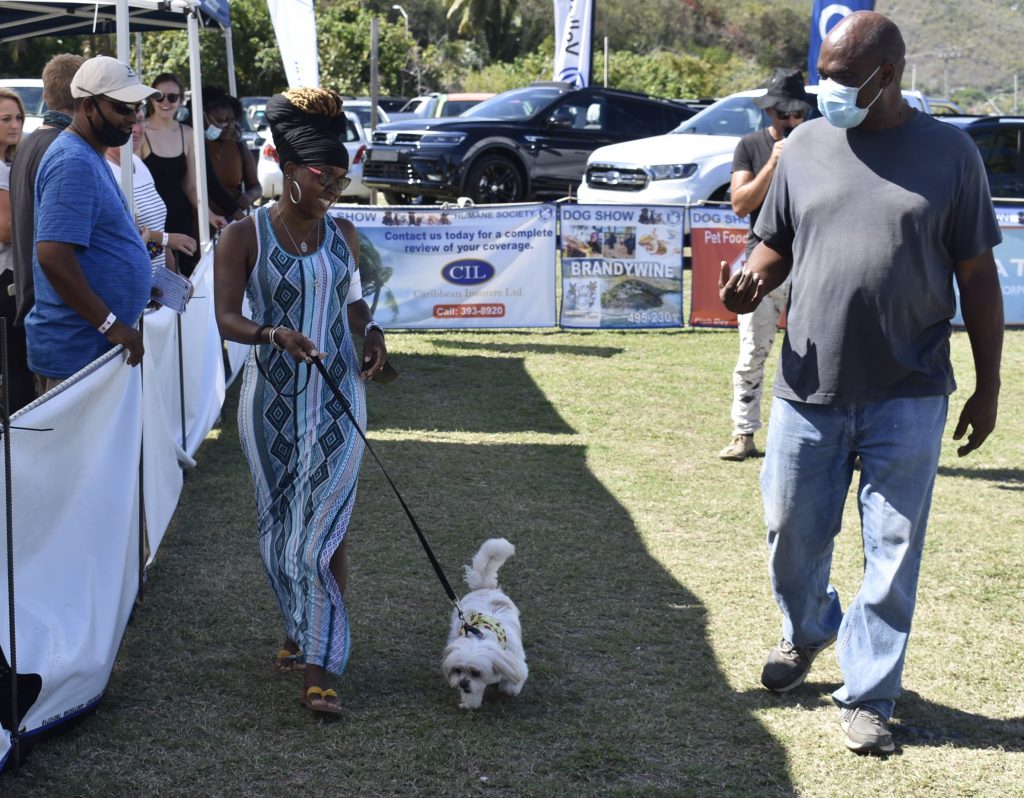 A competitor chats with a judge while taking her dog on a lap around the arena during the Dog Show hosted Saturday by the Humane Society. (Photo: JOEY WALDINGER)

In a small open-air pen on the grassy lawn at Captain Mulligan’s at Nanny Cay, dog owners walked in circles with their fluffy friends on a leash.

A girl gently redirected her dog, who apparently had turned around to meet a competitor, and another woman broke into a mellow trot, her yellow sundress matching the shirt hugging her dog’s torso.

It was the “lowest low rider” competition during the 21st annual Humane Society Dog Show, and in this particular event the judges were looking, as the announcer put it, “for the undercarriage to really drag on the ground if possible.”

Just as with Maggie, the first dog Ms. Entwistle owned in the Virgin Islands, her relationship with Scratch started by chance.

Once while Ms. Entwistle was on a walk, Scratch emerged from the bush and followed her home, she said.

“Both of my dogs just showed up in my life and said, ‘I think I’m gonna live with you now,”’ Ms. Entwistle joked.

Saturday was about the fifth time she entered Scratch — who has white paws, black fur and a bushy tail — into the dog show, something she enjoys doing because it allows the dogs to be so social with one another.

But the weekend’s event was about much more than competition.

In lieu of the Humane Society’s Gaming Night, which was nixed from the calendar this year because of the Covid-19 pandemic, the dog show was the year’s biggest fundraiser for the non-profit, which has been saving money to build a new shelter after being told last year by its landlord that it needs to find a new location.

Ms. Entwistle — who was selling mugs adorned with a paw print, among other items — was one of the many vendors who set up shop.

Holistic Jewellery was selling some of its wares, A&D Bounce inflated a bouncy castle, and several charter companies offered up daysails as prizes for raffle winners.

Though the day’s take of about $13,500 fell short of the $20,000 the humane society raised during last year’s dog show, the organisers said they were still grateful to have raised that much considering the financial hardship many have faced during the pandemic.

Other fundraisers for a new shelter are coming up as well, including a special quiz night at Gene’s Bar and Grill in Manuel Reef on May 13, said Julie Alfoldi, who will be co-hosting the quiz.

“It’s just great that everybody can come out,” Kirstie Palmer, another Humane Society board member, said of Saturday’s dog show.

“It’s the first real big event here on Tortola [since the pandemic]. … So it’s nice, it’s nice to be raising funds again for the shelter.