With boating, music, partying and cash prizes, the first One VI Poker Run crowned the winners on Sunday after a long day of events. Jareem Todman picked the winning poker …

END_OF_DOCUMENT_TOKEN_TO_BE_REPLACED 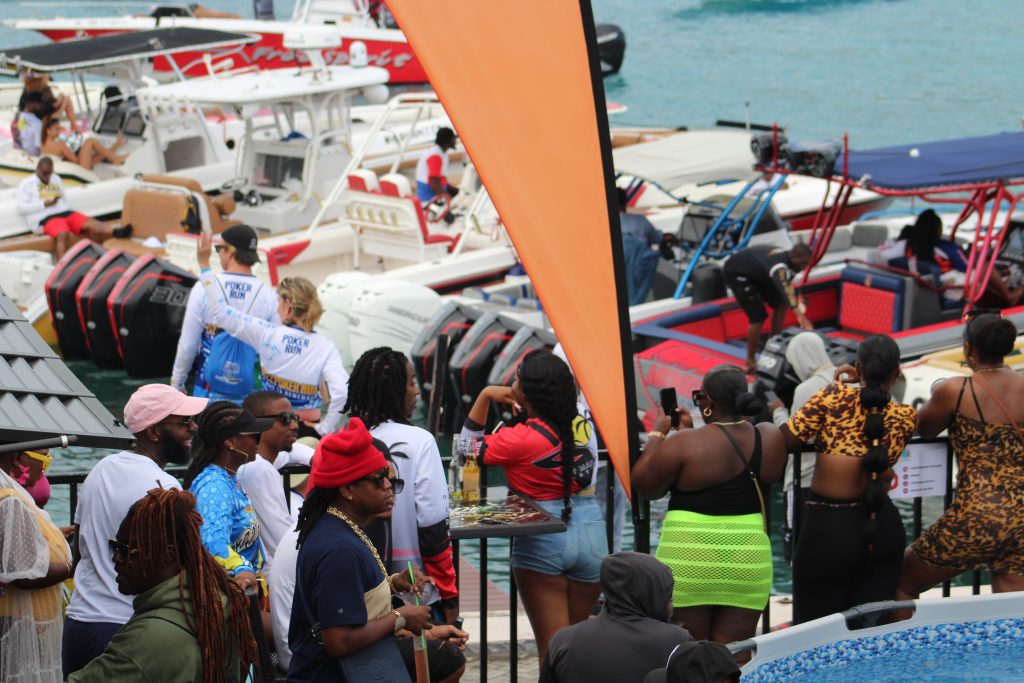 The One VI Poker Run drew hundreds of people to play for a winning poker hand while boating across the territory on Sunday. Above, participants stop at Foxy’s Tamarind Bar on Jost Van Dyke for their first card drawing. (Photo: ZARRIN TASNIM AHMED)

With boating, music, partying and cash prizes, the first One VI Poker Run crowned the winners on Sunday after a long day of events.

Jareem Todman picked the winning poker hand and took home the grand prize of $8,500 and a $4,000 custom-made pendant from the House of Luxury.

“I was so happy to see so many people,” said participant Nicole Bongarth. “It’s a big event, and without them it wouldn’t have been successful. It’s about people coming out to support.”

Organisers said the poker run raised at least $20,000 that will go toward purchasing smartboards, computers and air conditioners for two schools in the territory.

“It was really an amazing experience, and I’m so glad they didn’t give up on this event,” Ms. Bongarth said. “Everything was organised in a way that made you feel safe. It wasn’t crazy. I saw lifeguards there and the police there.”

The weekend’s activities kicked off with a welcome party on Friday night at the Cyril B. Romney Tortola Pier Park.

During a land-based poker run, participants collected cards at five bars and restaurants in the area. Shaniece Liverpool won the contest, along with $1,000.

Premier Dr. Natalio “Sowande” Wheatley said during the event that the poker run may be held annually each July as a warm-up to the August Emancipation Festival.

He added that he was enjoying the festivities at the Pier Park. The main event began Sunday with registration in Cane Garden Bay from about 8:30 to 11 a.m. More than 3,500 people attended the main run, and 150 boats from across the territory filled the bay before heading to the first stop in Jost Van Dyke at Foxy’s Tamarind Bar.

From there, the boats crossed the channel to Virgin Gorda and stopped at Blunder Bay, where deejays performed under white tents while volunteers served drinks by the dock.

Next, participants crossed the channel again and touched down at Loose Mongoose in Beef Island for a buffet lunch and refuelling.

At the Pier Park — the second-to-last stop of the run — parties were held along the pier. Tropix cocktail bar hosted a foam party and set up an inflatable pool.

Dr. Wheatley was there too, and said he was pleased the event had been incident-free so far.

Volunteer Ella Crone, who was serving free BVI Gin drinks to the public, said she hoped to see all the teams that registered for the race and encouraged everyone to try the locally made alcohol.

The final stop was in Cane Garden Bay, where participants drew their final cards and events for the evening continued.

The road through Cane Garden Bay was made into a one-way road to facilitate traffic during the event. A shuttle service from Enis Adams Primary School and from the Cyril B. Romney Tortola Pier Park to the main event at Paradise Club Bar and Restaurant ran between 2 and 10:30 p.m.

“I think the route was a brilliant idea, because they changed up the stops,” Ms. Bongarth said. “I know it’s not easy to run such an event, but they made it look so easy. I love to see everybody come together.”

Organisers said they expect the poker run to become one of the three largest annual maritime events in the territory, along with the BVI Spring Regatta and Sailing Festival and Christmas in July, which is scheduled to start on July 23.

“Events like these are important to the Virgin Islands, known as the ‘sailing capital of the world,’” organisers posted on Facebook. “The [poker run] is a welcome addition to the destination’s attraction, and further secures the Virgin Islands as the leader in sea-based activities for tourists and locals alike.”