(Updated) Thousands ring in the New Year at Foxy’s

As the sun set past the horizon on New Year’s Eve, yachts in Great Harbour, Jost Van Dyke, lit up the sky with lights. Thousands made their way over to …

END_OF_DOCUMENT_TOKEN_TO_BE_REPLACED 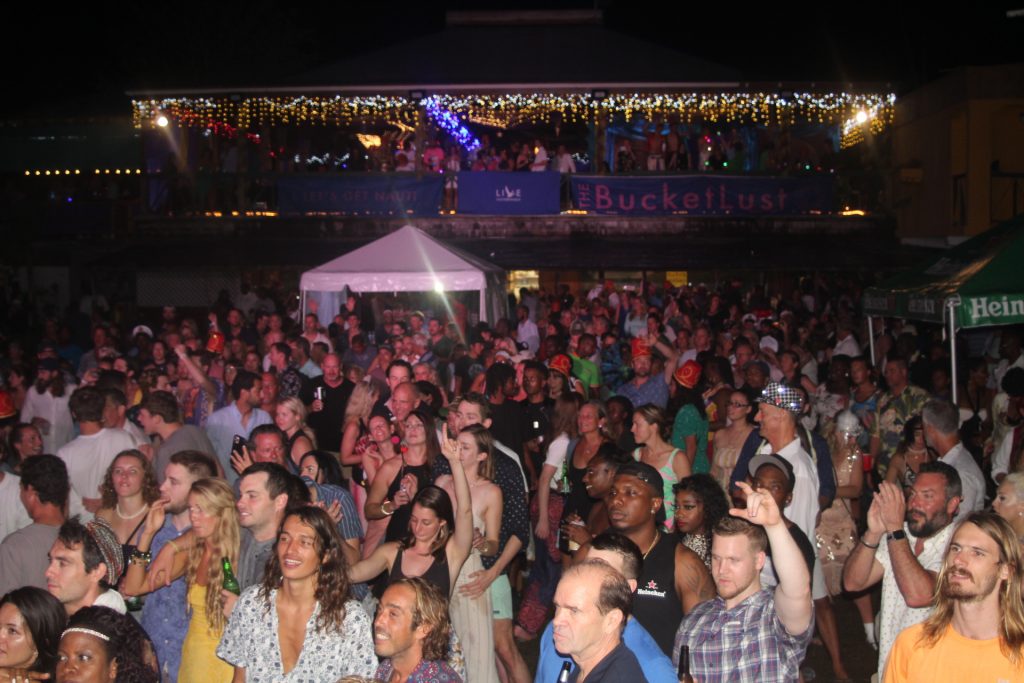 As the sun set past the horizon on New Year’s Eve, yachts in Great Harbour, Jost Van Dyke, lit up the sky with lights.

Thousands made their way over to Foxy’s Tamarind Bar and Restaurant’s Old Year’s Night party, which is typically one of the territory’s largest New Year’s celebrations.

“One big party, one small island: That’s what we say,” said Ricky Callwood, an organiser of the event.

He noted that the turnout was back up to pre-Irma levels and was better than last year.The environment and atmosphere of Jost Van Dyke — specifically Foxy’s — is what brings the crowds back every year, he said.

“It’s relaxed,” he said. “You’re partying, but you feel more at home.”

Foxy’s regularly hosts themed parties, and Old Year’s Night was no exception. This year the theme was Arabian Nights.

Cutout, nine-foot-tall camels adorned palm trees throughout the restaurant and bar as guests dressed as genies and bellydancers pranced around.

The main stage in the back of the establishment also took on the theme with towering “castles.”

Along with bellydancing performances by the Tortola Dance Group, deejays played music in the front and back of the venue throughout the night.

The main event, Third World, a reggae group from Jamaica, took the stage and rang in the New Year with the crowd. Though the party in the back of Foxy’s lasted until about 1:30 a.m., the drinking and dancing continued all along Great Harbour, where stalls were set up across from the establishments in the area.

Ferries took guests back to Tortola at 1 a.m., 2 a.m., 3 a.m., 5 a.m. and 7 a.m. Taxis also awaited guests at both ferry terminals, transporting partygoers to and from their destinations.

It was just one location of many throughout the territory that celebrated New Year’s Eve.

In Duffs Bottom, the New Life Baptist Church was one of many churches that celebrated the last day of the year with a service.

In Cane Garden Bay, Quito’s Gazebo served a four-course meal for its guests, and the beach lit up with a fireworks display after midnight.

On another end of Tortola, people flocked to the Trellis Bay Market Place to partake in the Flag Fete, an event that aspired to bring “all nationalities together” and encouraged people to wear colours of their flags or bring flags of their hometowns.

Deejays pumped music all night, moko jumbies made appearances, and fireworks took off at midnight.

Other businesses along the stretch of sand, however, didn’t fare so well.

According to Aragorn Dick-Read, a reduction in the bay’s mooring capacity as a result of a new shipping channel was reflected in the attendance numbers. His business, Aragorn’s Studio, made only a tenth of the profits seen in pre-hurricane years.

Just across the water at Scrub Island, there was a “Grown and Sexy” party at the marina, resort and spa. On Virgin Gorda, Sugarcane Restaurant offered a six-course dinner and entertainment by aerialist Amanda Georges as well as music by local deejays.

Many places kept the party going into the morning. At Foxy’s Taboo, many of the musicians who played at Old Year’s Night headed to the other side of Jost Van Dyke to continue the entertainment. In Great Harbour, Ali Baba’s restaurant offered a New Year brunch.