A royal engineer who helped open the airport, shelter managers who lived among the homeless for months on end, police and fire officers who assisted the vulnerable, and an elected …

END_OF_DOCUMENT_TOKEN_TO_BE_REPLACED 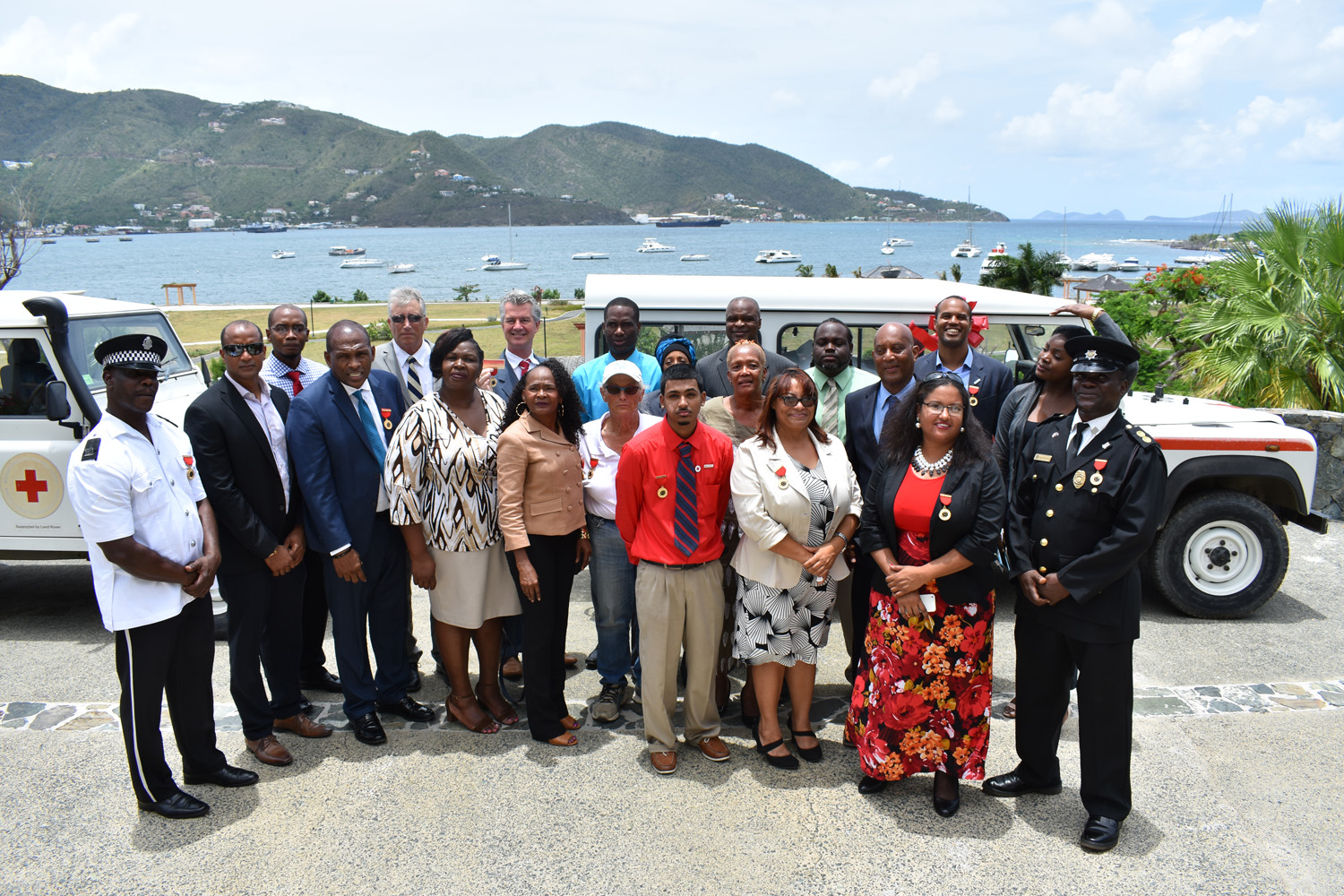 A royal engineer who helped open the airport, shelter managers who lived among the homeless for months on end, police and fire officers who assisted the vulnerable, and an elected official who opened his home to displaced government employees were just a few of the 25 people who received the Red Cross Medal for Service and Bravery last Thursday at Government House for their heroic efforts during Hurricane Irma and its aftermath.

BVI Red Cross board member Troy Christopher said the board chose the recipients in order to “salute those heroes that displayed great courage, bravery and love of country.”

Helen Frett, director of the BVI Red Cross, said, “During [Irma], the honourees demonstrated the principle of humanity in saving lives and easing pain and suffering. They were courageous in stepping out while others remained indoors. They went into overdrive while others were too shocked by the events to take action. None of them were thinking of being rewarded when they did what they did.”

Vincent Wheatley, who helped establish the Virgin Gorda Recovery Operations Centre in order to communicate with and aid his fellow Virgin Gordians, said the award meant a lot to him because the sister island felt cut off immediately after the storm.

“We had to come together as a community and really make it work,” Mr. Wheatley said. “We had to…organise ourselves and handle relief to get all inventoried and distributed for many, many mouths.”

The awardees represented a cross-section of the territory, from Red Cross volunteers to private business owners to public employees who went beyond the call of their positions. Two non-humans were also honoured.

Two Red Cross Land Rovers — affectionately dubbed The Ambulance and Puma —were awarded for being among the first vehicles on the roads after the disaster. “Their presence in the community brought hope to everyone,” explained Governor Gus Jaspert, before his wife, Red Cross patron Millie Jaspert, adorned them with red ribbons in front of a crowd assembled on the steps of Government House.

Health and Social Development Minister Ronnie Skelton praised the honourees for “proving that anyone regardless of their background can see the bigger picture and recognise the need to lend a helping hand to do what we need and help rebuild the territory.”

Ms. Jaspert added that she came to understand the role of the Red Cross when the organisation’s volunteers were some of the first people she saw in the aftermath of the hurricane, working to help someone trapped in a first floor apartment who needed kidney dialysis.

“I realised at that point what a critical part of the BVI they were,” she said.
She went on to praise the financial assistance programme, which provided cash to 1,000 families.

Ms. Jaspert said choosing the award recipients was an incredibly difficult task, and added that many more heroes still need to be thanked.

“I know that throughout our community there are people who have made a huge difference even now,” she said. “There are many people who are sheltering neighbours in their own homes and continue to make a massive difference on an individual basis.”

Award recipient Maureen Frazer, a Red Cross disaster manager, drove one of the Land Rovers, assisting with first aid and emergency transportation immediately after the storm.

“When I joined the Red Cross, it was paying it forward because somebody [helped] me many years ago,” she said.

Recipient Alex Jeffrey, a Department of Disaster Management officer, was injured after climbing on the roof of the agency’s headquarters in the eye of the storm to try to fix a damaged antenna. He said he was never interested in any public recognition for doing his job, but that it felt good that “a person like me who was injured, [that] persons have been trying to continue to honour you for what was done and what you continue to do out there for the community.”

Mr. Wheatley said that he agreed that the recipients exemplified selflessness given the magnitude of the disaster.

“There are a lot of persons out there in the community who themselves lost everything and were homeless themselves, and they really went out of their way to help others,” he said.

Ministry of Communication and Works