On Monday afternoon, Department of Disaster Management Emergency Communications Officer Jacob Adolphus climbed in the back of a DDM pickup truck and opened the control box of the emergency siren …

END_OF_DOCUMENT_TOKEN_TO_BE_REPLACED 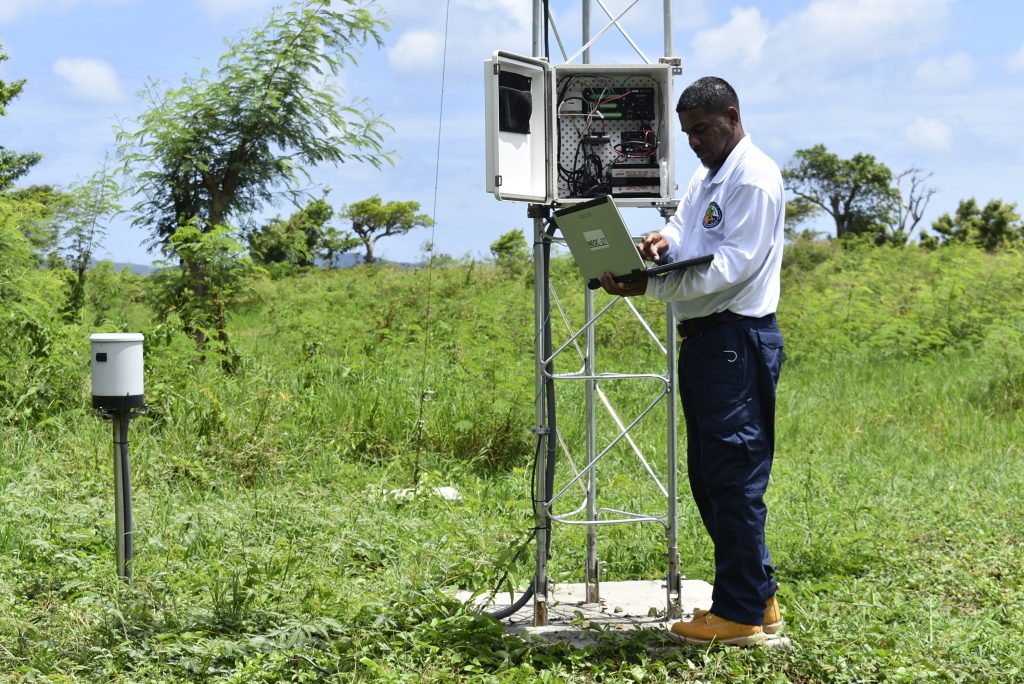 On Monday afternoon, Department of Disaster Management Emergency Communications Officer Jacob Adolphus climbed in the back of a DDM pickup truck and opened the control box of the emergency siren located next to Cedar International School.

He was testing the warning signals the day before the Atlantic Hurricane Season started on Tuesday.

With the first-named storm forming northeast of Bermuda ten days before the season got underway, officials here are preparing for the worst and urging residents to do the same.

“Forecasters tell us that 2021 is likely to be another active hurricane season. Indeed, before the official start of the sea-son on June 1, Tropical Storm Ana had already formed and dissipated,” Governor John Rankin said Tuesday. “As all too many of us know and have witnessed first-hand, just one impact on our territory can be devastating.”

BVI Red Cross Director Stacy Lloyd warned on Tuesday that experts predict 13 to 20 named storms this year, with six to 10 of those developing into hurricanes and three to five possibly reaching category three or higher.

“During the next six months, heavy rain, landslides and floods could further affect communities already grappling with the pandemic, where livelihoods have been destroyed,” Ms. Lloyd warned. “To mitigate the logistical challenges caused by the Covid-19 restrictions, the BVI Red Cross has pre-positioned contingency stocks across the sister islands to provide immediate response to the humanitarian needs of up to 300 households.”

She added that the agency also has “emergency go bags” and first aid kits available for purchase.

The governor said preparedness efforts have been underway in the National Security Council as well. They include updating emergency operations plans and ensuring that security assets re- main safeguarded and that the territory’s police and fire officers are standing by to respond rapidly, he explained.

He also said that two naval support ships from the United Kingdom are positioned to help with relief efforts.

“One is in Caribbean waters year-round, and the other is here for the hurricane season,” he stated. “Both ships stand ready to provide humanitarian aid and disaster relief should we see a major impact such as a hurricane, earthquake or flood.”

Mr. Rankin added that public agencies are “carrying out their annual readiness assessments.”

For Mr. Adolphus, that includes testing the 12 sirens located across the territory, as well as a routine download of data from 25 weather stations.

“We have weather stations situated across the territory that collect and store data,” he said. “Now that we are going into the hurricane season just after a system passed through, we collect that information, including windspeed and rainfall.”

Mr. Adolphus said the DDM runs tests on the multi-hazard warning system every fourth Friday at 2 p.m. throughout the year. The tests run for a minute, but if a disaster occurs, they run for five minutes and re- peat at least three or four times.

He also said that all government agencies and statutory bodies that have VHF radio capabilities run communication tests daily.

Dr. Wheatley added that the territory is still a part of the Caribbean Catastrophe Risk Insurance Facility regional insurance programme.

“By providing insured nations payouts in the event of major damages caused by earthquakes, tropical cyclones and excess rainfall, CCRIF coverage means that if we should face another disaster, we will have the financial means to begin the rebuilding process right away,” he said. “We would not like to see a loss of all the gains we have made since 2017 in the event of another hazard impact.”

Dr. Wheatley acknowledged the efforts of the private sector, the Recovery and Development Agency, and international partners like the Caribbean Development Bank in rebuilding the territory from the devastating effects of hurricanes Irma and Maria in 2017.

“Review and update your emergency plans and emergency supply kits as necessary; take steps to protect your property by ensuring that you have adequate structural protection and that there are no unnecessary hazards around your home or business,” he urged residents.

January 21, 2022
January 13, 2022
November 3, 2021
March 17, 2019
February 7, 2018
January 30, 2018
We use cookies on our website to give you the most relevant experience by remembering your preferences and repeat visits. By clicking “Accept All”, you consent to the use of ALL the cookies. However, you may visit "Cookie Settings" to provide a controlled consent.
Cookie SettingsAccept All
Manage consent