Hurricane season starts tomorrow, as Alberto makes landfall in US

END_OF_DOCUMENT_TOKEN_TO_BE_REPLACED 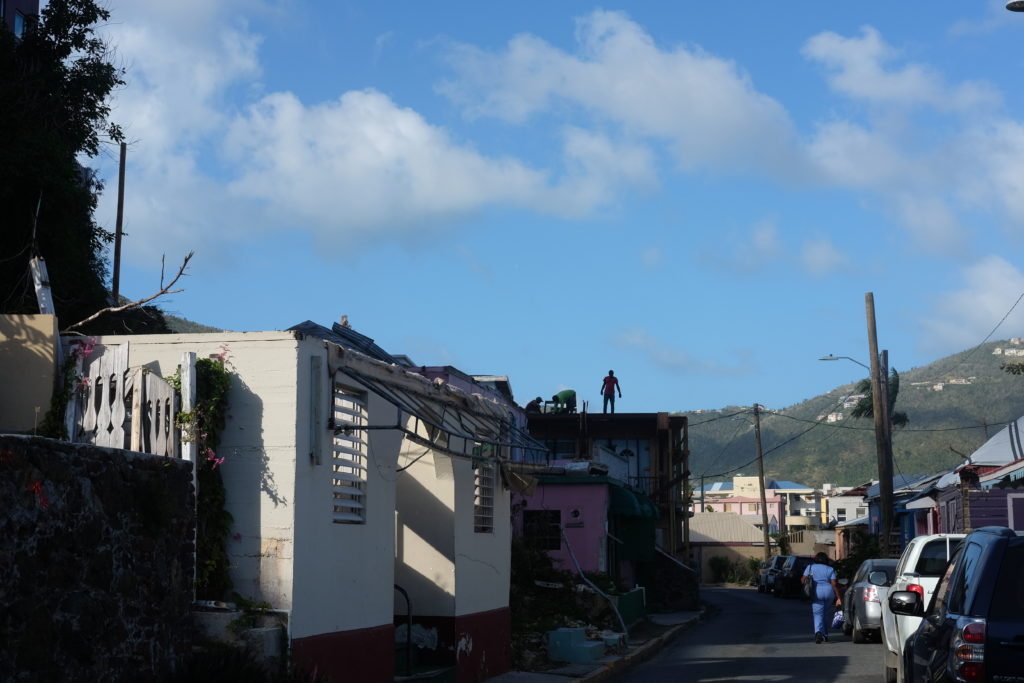 Though hurricane season begins on Friday, many buildings across the territory remain heavily damaged. Above, workers repair a roof on Main Street in March. (Photo: AMANDA ULRICH)

Governor Gus Jaspert assured the public in a press conference this month that government is doing all it can to prepare for what is slated to be another active season.

“Things are not in a perfect condition, as people can see when they walk around, and that’s why recovery is such a priority,” he said.

Mr. Jaspert announced that Cabinet will allocate extra funding to help prepare damaged emergency shelters across the territory and ready communication systems, though he did not say how much.

The Department of Disaster Management is also set to release an updated list of shelters tomorrow.

DDM Director Sharleen DaBreo told the Beacon in April that the department typically publishes the list on June 1 every year, and that an advertisement with that information is usually included in a newspaper.

As of last month, structural inspections of last year’s shelters were being carried out with the help of the Public Works Department, and the Environmental Health Division was conducting public health inspections, Ms. DaBreo said.

The Royal Fleet Auxiliary ship Mounts Bay was also docked in Port Miami from May 22 to 25 in preparation for the 2018 hurricane season, according to a government press release.

The ship, which provided humanitarian assistance and disaster relief to the VI after hurricanes Irma and Maria, carries tractors, diggers, trucks and all-terrain vehicles, as well as a helicopter that can assess hurricane damage or carry snipers for counter-narcotics work.

The ship, which has been deployed in the region for almost a year, departed Miami last week to complete a two-week training period and “prove readiness” for future operations, the release said.

But government officials face other serious concerns as the hurricane season looms.

The dumpsite at Coxheath — which was designated as a collection point for hurricane debris about eight months ago — is still burning after a massive fire broke out there three weeks ago. Mountains of charred garbage, which officials have said could become projectiles during a storm, still litter the area.

The Department of Disaster Management itself is also temporarily housed in the Simms Mini Mall after its building was destroyed last year.

Deputy Premier Dr. Kedrick Pickering said during a press conference last week that those problems would be addressed, but he did not provide specific details.

“Everything won’t be in place for June, but most of [those issues] will definitely be in place as time evolves and certainly by the time we get to the peak of the hurricane season,” said Dr. Pickering, who was acting as premier at the time.

The first named storm of the season — Alberto — made landfall in Florida on Monday. Alberto passed Laguna Beach with maximum sustained winds of 45 miles per hour, according to meteorologists.

As the storm moved inland at about 12 mph, it weakened to a depression, the United States National Hurricane Center reported.

In recent months, forecasters have been predicting what the upcoming season could hold.

The climate centre also estimated a 70 percent likelihood of 10 to 16 named storms, one to four of which could become major hurricanes.

A research team at Colorado State University made similar predictions in April.

The university’s Tropical Meteorology Project group said the season will be “slightly above average” and will likely include 14 named storms and three major hurricanes.

The university also speculated a 52 percent chance of a major hurricane tracking into the Caribbean. In comparison, the average for the last century is 42 percent.

Many forecasters have agreed that the season is likely to be active because of the low likelihood of a significant El Nino event, a weather phenomenon that tends to increase westerly winds across the Caribbean and breaks up forming hurricanes.

In a series of press releases, DDM has encouraged the public to start planning for the hurricane season.

Emergency plans should include details about medications, backup communications and power, and battery or solar-powered lights and radios.

“Homeowners are urged to prepare their homes, keep their yard free from debris and other loose items, ensure that trees and shrubs are well trimmed so they are more wind resistant, and clear the yard of items that could become projectiles during high winds,” DDM stated.

The Governor’s Office also reminded residents to ensure that their travel documents are valid, and that copies of all important personal documents are stored in a safe place — but added that the office cannot help with passport inquiries.

DDM also warned that travelling to the US in response to an impending hurricane is not possible for anyone without valid documentation.

“Persons who may wish to travel to the US either before or immediately after a hurricane are notified that it is essential that their documents are in order as it is extremely unlikely that anyone without appropriate documentation will be allowed to enter the United States,” the department stated.