In a small conference room-turned-bar-and-recording-studio, crewmembers from 16 yachts sang “We are the World” as the finale to the Spring Charter Yacht Show last Thursday evening. The performance was one …

END_OF_DOCUMENT_TOKEN_TO_BE_REPLACED 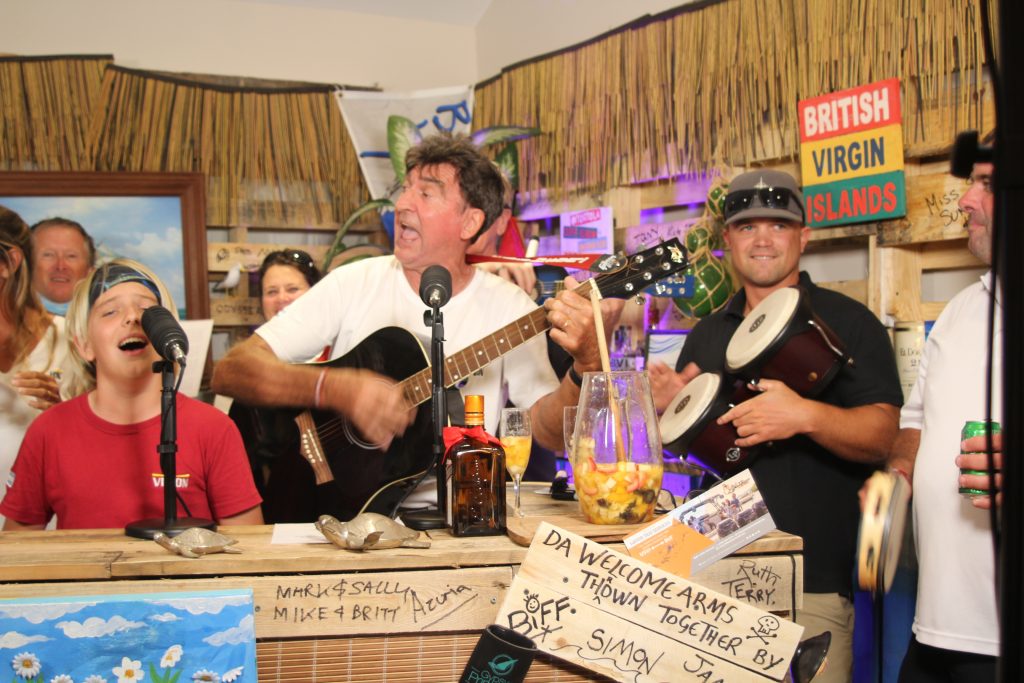 Crewmembers from the Spring Charter Yacht Show sing “We Are the World” as a closing finale for the “hybrid” event. That performance and other parts of the show were broadcast live for brokers abroad. (Photo: ZARRIN TASNIM AHMED)

In a small conference room-turned-bar-and-recording-studio, crewmembers from 16 yachts sang “We are the World” as the finale to the Spring Charter Yacht Show last Thursday evening.

The performance was one of several events held virtually during the three-day “hybrid” show, which mixed in-person activities with online options for yacht brokers participating from abroad due to the Covid-19 pandemic.

For Per Skogsberg and Lina Nilsson, crewmembers of the 45-foot catamaran Miss Summer, the yacht show was their first in the Virgin Islands. As they relaxed on a neighbouring boat last Thursday afternoon, they found themselves making new connections with other crewmembers.

“We are very excited to be here,” said Mr. Skogsberg, who added that he thoroughly enjoys chatting with people from all over the world while at sea. The pair also answered questions on that night’s virtual show in a decorated studio dubbed “Da Welcome Arms.”

“When I was deciding what to do in my life, I thought if I could take other people to the places I like, it would make me happy,” he said on the live broadcast. “It makes me happy. It’s a good life.”

Ms. Nilsson, a former project manager, explained that she treats each charter like a “small project.”

The pair also noted that they like to add Swedish foods on their menu to celebrate their heritage, and they brought a special spiced vodka to the virtual show. The event culminated a busy three days for participants.

Starting on May 11, local businesses were able to connect with the crews during Vendors Night at Peg Leg’s Restaurant, where Oren Hodge played live music.

On May 12, staff members from the Centre for Applied Marine Sciences Mangrove Nursery at the H. Lavity Stoutt Community College hosted a mangrove planting workshop at Captain Mulligan’s. The following day, media houses were invited to tour Da Welcome Arms studio to catch footage as it was broadcast.

The virtual show consisted of 10-minute pre-recorded videos of each boat, a live question-and-answer session with each crew, and some live recordings at the marina.

Alastair Abrehart, owner of Broadsword Communications, explained that his company set up and ran the virtual show.

“I pitched the idea of a virtual show. We were researching pretty much until the show went live. We researched equipment, streaming technologies, software, all that stuff,” he said. “A lot of what I saw was pretty rubbish actually. I was surprised how bad far bigger productions than us were doing.”

Other shows use platforms like Zoom, he said, but he decided to take a different route.

“The talk show thing, we thought, was a really nice way to do it,” he said. “It makes it far more watchable and far more engaging.” According to Mr. Abrehart, Digicel installed an antenna above the studio and provided internet service with “rock-solid” uploading speeds. Broadsword Communications set up a password-protected website with links.

Brokers who paid to attend were able to watch 16 hours of content over three days and interact with crews by submitting queries during the live question-and-answer sessions.

“Because the Charter Yacht Society is representing luxury crewed yachts all working at the top of our game, we needed the show to reflect that,” said Amy Edmunds, a chef on the boat Gypsy Princess and one of the hosts of the show. “To be able to have something that is so much more than just a Zoom chat is something we’re so conscious of.”

Wearing pirate-themed t-shirts, CYS Director Janet Oliver and Ms. Edmunds hosted the show while asking crewmembers questions on be- half of the brokers. Building the set “Da Welcome Arms” was the first set they had created, and it took a day to build, they said.

“They came in at 7 o’clock and took apart the boardroom and by 4:30 it was Da Welcome Arms,” Ms. Oliver recalled.

Sponsors donated items like paintings, decorations, bottles of alcohol, and wooden pallets to create the set.

Each crew was invited to sign a piece of the bar at the end of their 30-minute segments.

The crew of Odyssea encouraged people to visit the VI during this time for a chance at an “exclusive” and “privileged” vacation. They said that their guests have experienced having The Baths all to themselves and that it felt like a “once-in-a-lifetime experience.”

The fall show has already been announced on the yacht show’s Facebook page. It will be held from Nov. 3-6 and will be a hybrid show again.