At 11:30 p.m. last Thursday night, I tied my sneakers and walked out in the empty street with a mask already on my face. Waiting at the corner was my …

END_OF_DOCUMENT_TOKEN_TO_BE_REPLACED 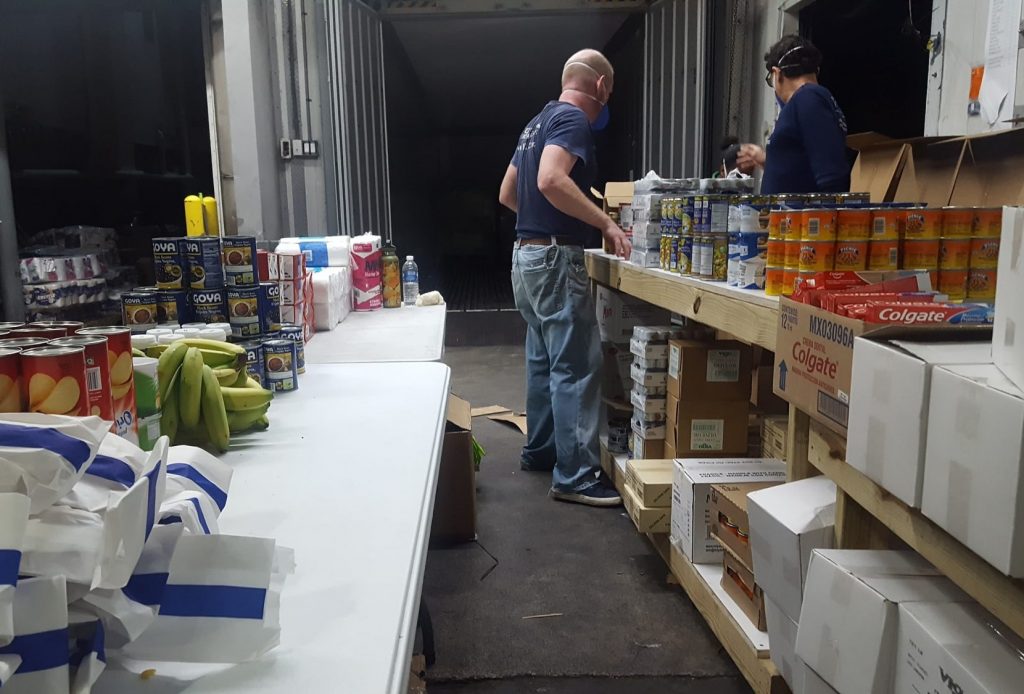 At 11:30 p.m. last Thursday night, I tied my sneakers and walked out in the empty street with a mask already on my face. Waiting at the corner was my ride and soon-to-be colleague for the night, since we volunteered to work a graveyard shift at Rite Way Food Market pack- ing food assistance bags.

After my story last week about residents struggling to access food, whether it was online or through the government’s assistance programme, my friend suggested that I see what it’s like to be part of a team charged with putting together 3,500 packages for distribution over five days.

“Good idea,” I told him, and I went straight to the head of Virgin Islands Search and Rescue, which had signed up to help put the packages together, for permission.

I chose this midnight-to-8 a.m. shift because it would allow me to eat at night before I began fasting for the first day of Ramadan. At 5:30 a.m., I’d stop eating and drinking until sunset at 6:40 p.m. That includes fasting from drinking water, and it’s what many Muslims do for a month every year.

With my breakfast packed away in my backpack, I got into the car and asked my fellow volunteer about his experience so far.

“It’s been incredible,” he said. “It’s such a humbling experience.”

On April 18, government announced an extension of a 14-day lockdown following the first death in the territory due to Covid-19, and officials assured residents that “no one would go hungry.”

They rolled out a programme to deliver essential food and supplies throughout the territory and asked people in need to sign up for it. Those who were able to afford to buy groceries and other items were encouraged to do so via online shopping.

With $2 million allocated for the assistance programme, Rite Way was tasked with supplying 3,500 packages. One Mart supermarket and Bobby’s Supermarket also provided packages.

The packages were not just a single bag with a handful of items, as people across social media soon reported. They included an entire case of water, fresh produce, frozen meat, dry goods, nonperishable products, household items, and sometimes freshly baked bread.

When my friend and I got to Rite Way, there was already a lot of commotion. We didn’t waste any time walking up to the back of the building, where piles upon piles of boxes were placed outside. A man whizzed by us on a shopping cart, and my friend told me he was the man in charge. We walked toward the building on the loading dock, where a huge Tropical shipping container was parked.

Five volunteers in two lines were busy and didn’t miss a beat as we walked in. That night, they included VISAR members and their friends and family members, although different volunteers pitched in on other days, including police officers and members of the BVI Tourist Board.

Rite Way began its food packaging operation on Monday, April 20, and remained open 24 hours a day, working to fulfil the 3,500-package order by noon on Friday.

There were never fewer than five volunteers per shift, and never more than six — a limit set in order to maintain safe social distancing in the room.

My friend took a place in the line to the wall and I was directed to the tables in front of him. I grabbed gloves since I already had my mask on, took a swig of water, and put down my bag. 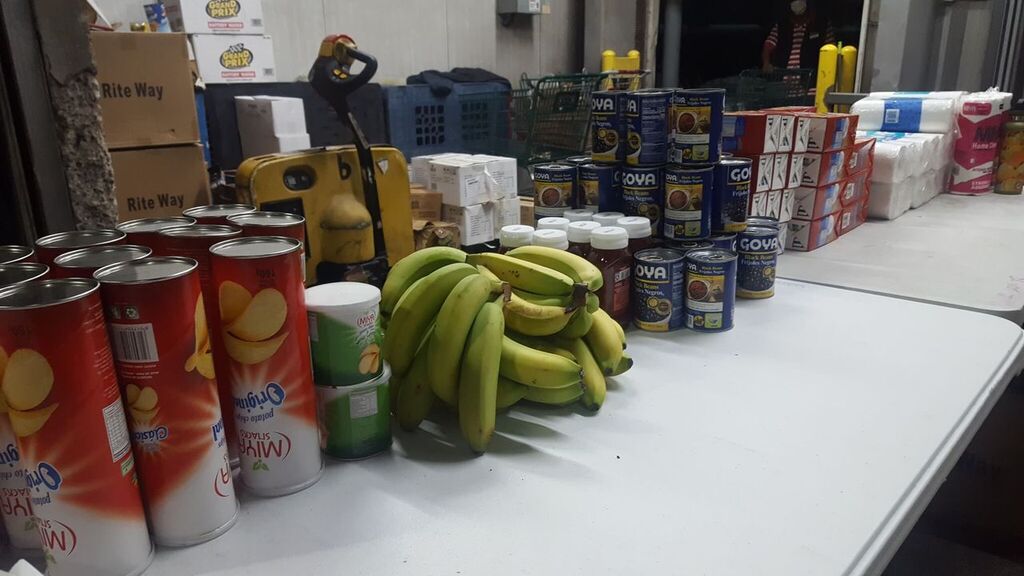 This was not for the faint-hearted. My heart rate was increasing and I had to control my breathing. It felt like I was running, and that for the next eight hours, I would have to run a marathon and pace myself.

So I kept track and kept count. I averaged putting together about 50 bags per hour.

If I ran out of items (which happened almost every ten minutes), I’d ask a Rite Way worker to grab the box for me. Eventually, they would just notice what needed stocking and keep the area under the table packed with the items. I’d still lift heavy boxes, sometimes 12-counts and sometimes 24-counts of each item, onto the tables every 15 minutes or so.

I created a system for myself to be as efficient as possible.

If in each bag I had to put two fruit juices, but there were only 12 juices in a box, that would make six bags per box. I could pack six bags in under six minutes.

So I’d keep four or five boxes on the table, to keep me going for longer until I had to restock.

I had to pack four bananas in each bag, but I noticed it took me a while to count out the bananas and rip what I needed off the bunch. So I’d keep the big box of bananas on the table and pre-rip bundles of four bananas.

For the two cans of beans, I lifted both cans with one hand and placed them into the bags. Same with the crackers. 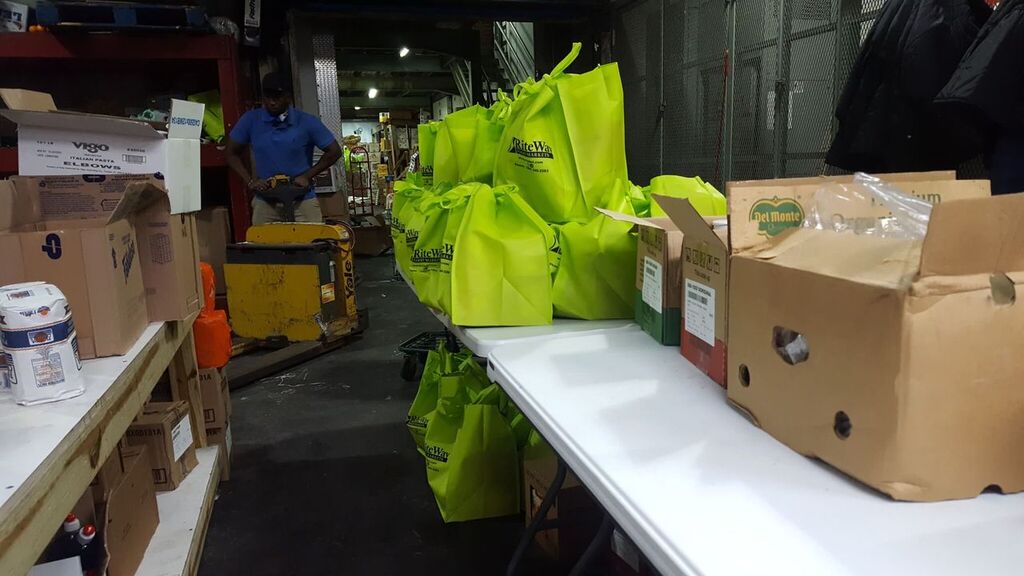 At first, I was squatting down (squatting for five minutes straight is not out of reach for me now) and taking each item out of the box and placing it on the table. But a supervisor told me to just keep it in the box and limit the number of times I touched each item, even though I had gloves on.

We all had masks and gloves on. Hand sanitiser was easily available. And no one coughed or sneezed.

These were strong and healthy people giving 100 percent of their effort for over eight hours during the graveyard shift.

We only took two juice breaks that were five minutes long, and one half-hour break to eat some snacks. Before sunrise, I took time to eat the pasta I’d brought, preparing for my fast.

Each pallet for distribution included 25 packages, and each package contained one of the dry bags that I packed, a box of non-perishables like tuna and Vienna sausages, a bag of fresh produce, and packages of water. Frozen meat was added just before distribution, so that it didn’t thaw out before reaching residents.

After the first four hours, I felt the sleep deprivation on my body step in quietly. As night turned into day, the tiredness fell on me. I wasn’t able to eat or drink anything to fuel me, but I kept going: I couldn’t slow the production down since I held a line on my own.

The programme’s first shift, which began Monday night and lasted until Tuesday morning, was almost 12 hours long. After that, the days were split into three eight-hour shifts: from 8 a.m. to 4 p.m., 4 p.m. to mid- night, and midnight to 8 a.m. The graveyard shift saw the fewest volunteers and was usually the least productive, the supervisor told me.

Around 7 a.m., people began coming in for work. They started right away, ramping up in-store operations and handling the online demands, as well as re-stocking shelves.

Besides the government’s programme, the store also had to fill thousands of orders from other residents. Online shopping was open on Saturday, April 18, and by the next afternoon, no more orders were being taken through the website due to an influx of requests. Still, some residents were able to get products through delivery drivers.

End of the night

A morning rain fell down, and my feet were beginning to hurt. I remember sitting down for, at most, a half hour throughout the entire night.

Eventually, 8 a.m. rolled around, but we didn’t stop.

We kept going until more volunteers showed up to take over our posts, and that wasn’t until 9 a.m., when a mix of volunteers and workers seamlessly took over the task with reserves of energy that I had depleted.

As we headed out the door, we were handed a tray of food which I took home to eat later in the day, after breaking my fast. 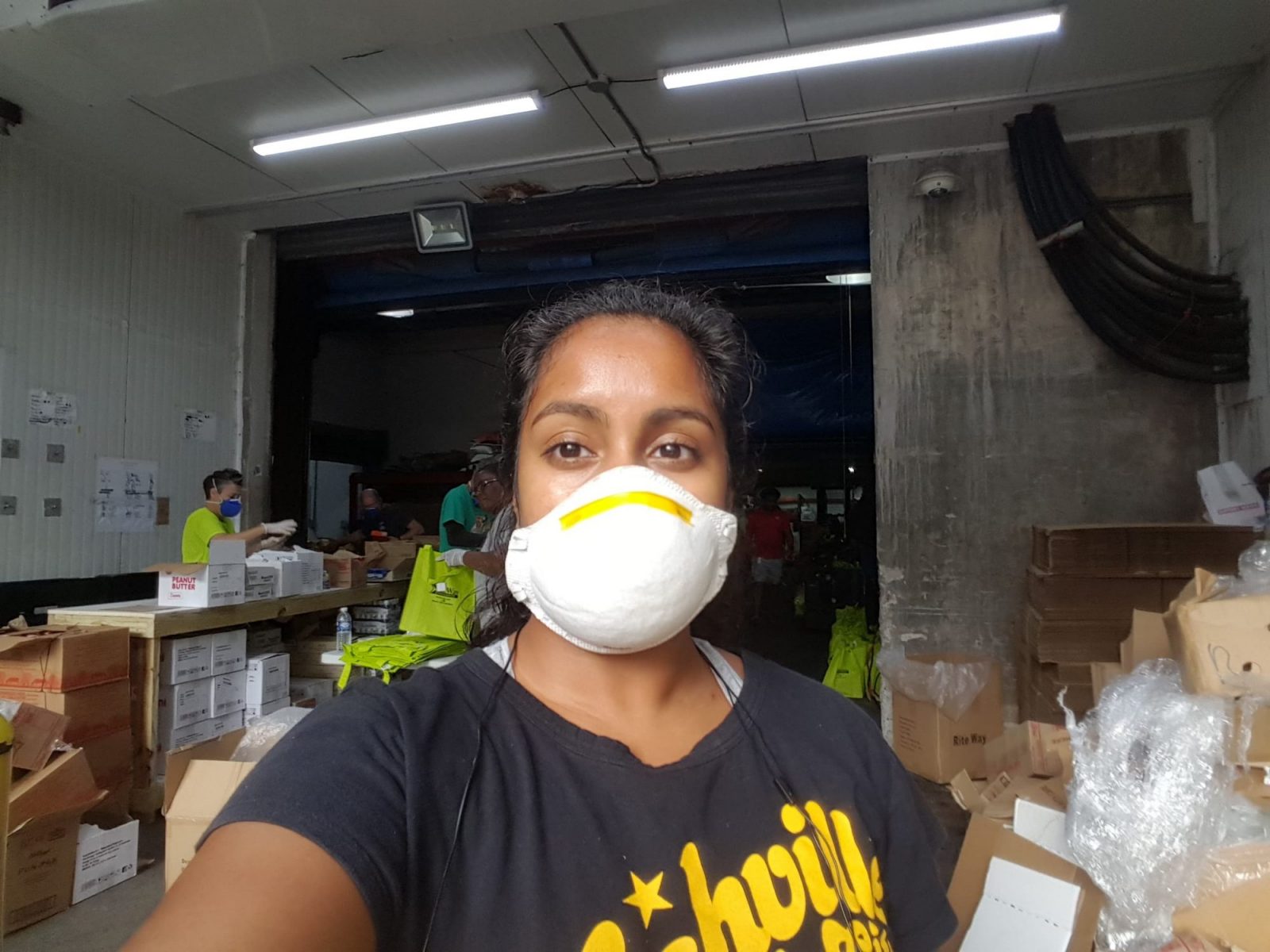 The goal had been to finish 3,500 by noon on Friday. Rite Way reached that goal on Friday night.

That was around the same time I woke up after sleeping all day, and eventually breaking my first fast of Ramadan.