The financial services industry had its worst year in more than a decade in 2015 in terms of new company incorporations, with only 44,752 new entities forming, according to the …

END_OF_DOCUMENT_TOKEN_TO_BE_REPLACED 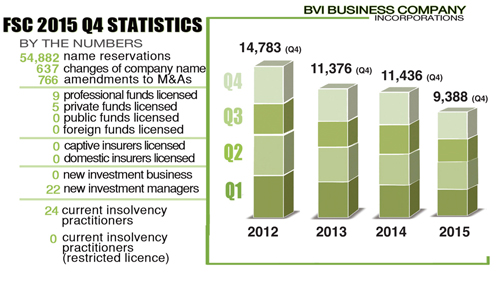 The financial services industry had its worst year in more than a decade in 2015 in terms of new company incorporations, with only 44,752 new entities forming, according to the latest statistics released last week by the Financial Services Commission.

Last year’s sluggish incorporation numbers were the worst on record since the FSC began issuing statistical bulletins in 2003. The previous low point was in the wake of the world financial crisis in 2009, when 47,477 companies incorporated.

The fourth quarter of 2015 also saw only 9,388 incorporations, making it the worst-performing period since Q4 of 2008, when 9,000 companies formed in the Virgin Islands.

The decline in new incorporations — which are generally seen as a bellwether for the health of the territory’s financial services industry — decreased the total number of companies incorporated here from some 475,000 in Q3 of 2015 to about 450,000 in Q4.

Industry practitioners were bracing for the negative statistics since at least January, when Vistra Managing Director Simon Filmer told a roomful of attendees at the BVI Business Outlook conference to expect Q4 of 2015 to be one of the worst quarters in years.

Mr. Filmer attributed that decrease in incorporations to uncertainty in the VI industry.

The territory is undergoing the most radical changes to its regulatory regime in at least 10 years, he explained in January.

Those regulatory changes include new requirements for companies to file lists of their directors with the FSC, as per recent amendments to the BVI Business Companies Act.

The territory is also coming on stream with the Organisation for Economic Cooperation and Development’s common reporting standards, which are introducing more reporting requirements for the jurisdiction.

While those changes are still being hashed out by legislators and the FSC, many new companies will likely be hesitant to incorporate here, Mr. Filmer explained in January.

Another reason often cited for the decrease in the VI’s popularity is the negative press the territory has received in recent years, which now includes another slew of articles reporting allegations of regulatory deficiencies in the VI system (see page one).