In surprise, Dorian brushes VI, but no major damage reported

As of 5 p.m. on Tuesday, forecasters were expecting the centre of Tropical Storm Dorian to pass well to the south of the Virgin Islands, buffeting Puerto Rico and possibly …

END_OF_DOCUMENT_TOKEN_TO_BE_REPLACED 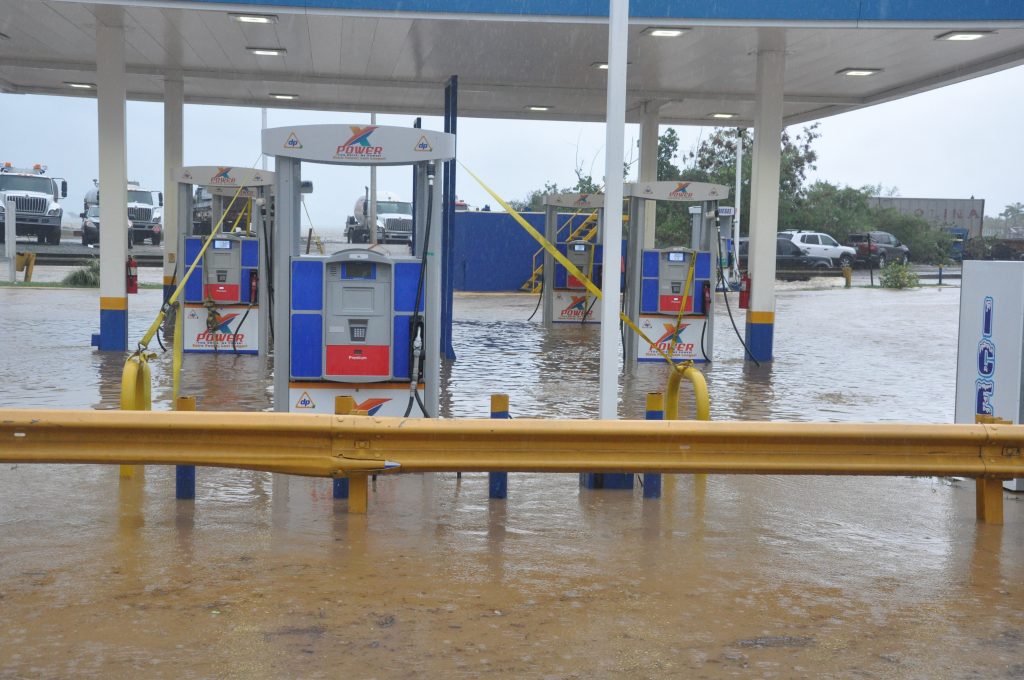 The Delta gas station in Pasea Estate flooded during Hurricane Dorian, along with the road nearby. (Photo: FREEMAN ROGERS)

As of 5 p.m. on Tuesday, forecasters were expecting the centre of Tropical Storm Dorian to pass well to the south of the Virgin Islands, buffeting Puerto Rico and possibly the United States VI but bringing little more than a smattering of rain and wind to this territory.

In the ensuing hours, the situation changed dramatically as the storm turned north, and the VI rushed to hunker down for possible hurricane-force winds Wednesday afternoon.

In the end, however, the territory was spared a direct hit.

By 5 p.m. Wednesday, the centre of Hurricane Dorian had passed over St. Thomas, and the winds and rain had died down here.

By that time, the Department of Disaster Management had received no reports of major damage, though it did receive some reports of downed trees and lost galvanised roofing on buildings that were previously compromised, according to Chrystall Kanyuck-Abel, DDM’s information and education manager.

Still, the VI was battered by heavy rains and winds during the early part of Wednesday afternoon. By 3 p.m. Tortola had lost power, parts of Road Town and Purcell Estate were flooded, waves washed over the coast road near West End, and a curfew had been issued until 6 a.m. Thursday.

But to many in the VI, which will mark the second anniversary of Hurricane Irma next week, the storm did not seem terribly momentous.

Elton Callwood, who lives in Carrot Bay, said he did not see any major damage.

“I don’t see anything on the roadside, and I haven’t heard of anything major happening,” he said yesterday shortly before 5 p.m. “So to me, it just seems like a regular rainy day here in Carrot Bay.”

Around the same time in Road Town, Dr. Christine Glover-Walton said she saw some flooding on Flemming Street, but hadn’t seen any major damage in the capital.

“I see a truck on the road and there were people walking around earlier,” she said. “So it must not be too flooded.”

Opposition Leader Marlon Penn, who was in Spring Ghut and represents the Eighth District, said East End may have been similarly spared.

“The winds are heavy, but they’ve subsided a bit; a lot of rain,” he said around 5 p.m., adding that he hadn’t heard of any major damage in his district, which he was planning to tour shortly.

The danger had come on quickly. When a depression was upgraded to Tropical Storm Dorian on Saturday afternoon, the system was projected to pass more than 100 miles south of the territory.

The predicted path of the relatively disorganised storm shifted up and down over the ensuing days, but most projections suggested that it would brush western Puerto Rico or eastern Dominican Republic and leave the VI largely unscathed.

As of 8 p.m. Tuesday, no watches or warnings had been issued for the territory, but a message from the Department of Disaster Management suddenly signalled that this might change.

“At 8 p.m., Tropical Storm Dorian made a slight shift to the north as it continues to move west northwest,” DDM noted on Facebook. “Forecasters have indicated that there is a possibility the system could track a bit closer to British Virgin Islands and may warrant the issuance of a tropical storm warning.”

Shortly thereafter, the predicted warning was issued, and the VI was added to a list with Puerto Rico, Vieques, Culebra, the USVI, and parts of the Dominican Republic.

On Wednesday, the VI woke up to a more dire warning.

“On the forecast track, the centre of Dorian will pass over or near the US and British Virgin Islands and Puerto Rico later today,” DDM warned at around 6 a.m.

“If it is safe to do so, however, we ask heads of departments to make an early check on offices and vehicles to ensure that they are secure,” Mr. Jaspert said. “Business owners should follow that same approach by securing premises early and everyone else should stay off the roads.”

By 10 a.m. all of the territory’s airports were closed. At 11 a.m. forecasters confirmed another shift in the storm’s track, explaining that the eye of Dorian would likely pass between the USVI and the VI, with the northeast quadrant of the storm passing directly over the VI.

“It is therefore a real threat to the territory, especially for those persons who may still be in vulnerable homes,” a DDM release stated.

Around the same time, territory-wide water distribution was suspended by the Water and Sewerage Department.

At 12:46 p.m., the governor ramped up the warning further, issuing a statement alerting residents to prepare for “hurricane conditions” in the territory.

“I strongly urge residents to now stay off the roads for non-essential traffic,” he said.

The VI was also placed under curfew from 2 p.m. yesterday until 6 a.m. Thursday morning, “or until an all-clear is issued by the proper authorities,” Mr. Jaspert explained.

He also said that police officers were placed on duty throughout the territory and enforcing the curfew.

At 2 p.m., Dorian was upgraded to a hurricane, and its centre reportedly was located over St. Thomas with maximum sustained winds of 75 miles per hour.

At some point during the storm, the NEOC left the DDM office and relocated to the 911 Centre at the Peebles Hospital.

“As a result of island-wide power outage that was caused by a fault at the power station and the loss of water, NEOC staff relocated to its predefined alternate site at the 911 Centre,” DDM explained on Facebook. “We understand that some persons are concerned for our safety after learning that the NEOC relocated. Please note we are all safe and this move to a location with consistent backup power was to allow our team to continue to provide the critical services to the BVI populace. We will now be able to provide our regular updates.”

The National Hurricane Center said that affected areas could experience maximum sustained winds of 70 miles per hour and gusts even higher, while DDM placed VI rainfall estimates at four to six inches, with as much as 10 inches possible in some areas.

The DDM also reported winds extending 80 miles from the storm’s centre, as well as hazardous marine conditions. According to the department, ocean swells could be up to 1.5 meters high.

All told, the DDM posted at least 13 updates on its site since Aug. 24, and phone carriers issued at least three warnings yesterday.

After passing over the VI and USVI, Tropical Storm Dorian is expected to continue over the Atlantic to the southeast of the Bahamas, building strength as it goes.

By the time the storm reaches the Florida coast, it is expected to be a Category 3 hurricane, according to the Orlando Sentinel.