In their Words: Bashaar Tarabay

END_OF_DOCUMENT_TOKEN_TO_BE_REPLACED 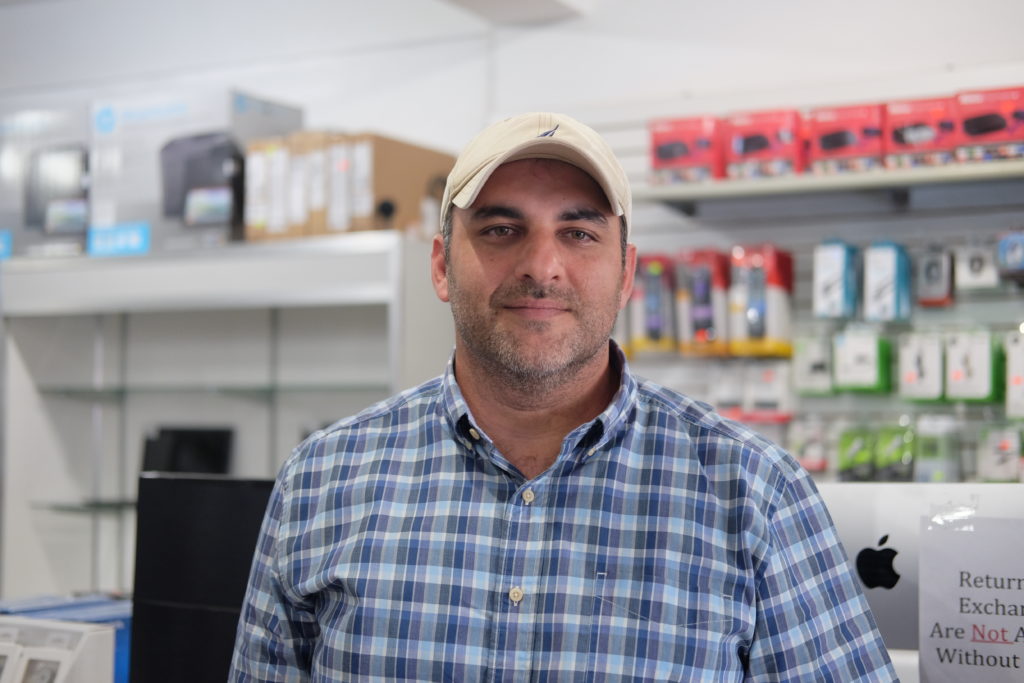 Two of Mr. Tarabay’s businesses — electronics store iSmart and clothing store Varieties Apparel — were heavily looted after Hurricane Irma. Since the storm, Mr. Tarabay has bought new merchandise and temporarily moved iSmart into the building that used to house Varieties. But since the store’s reopening in December, thousands of dollars worth of items have been stolen on two separate occasions.

The following are his words, condensed and edited by reporter Amanda Ulrich.

ISmart moved into this building around mid-December, and we started the process of getting the store ready in late November.

We got it ready in two to three weeks. We started with the roof [of the unit above us], and paid to get the roof repaired with an agreement with our landlord. We couldn’t technically open considering water would settle on the top roof and it was permeating through the ceiling here.

While they were repairing the roof, we cleaned up inside as much as we could. We treated it for mould ourselves and later brought in a professional company to do it.

Our plan is for iSmart to move back [to the Ramasco-Group building] obviously, but we’ll probably be here until about mid-summer.

We wanted to use this as a temporary location because in the Ramasco building the roof was completely destroyed, and we thought this was more manageable to get up and fixed.

You could barely stand up in here at first. It was just a mess. We worked every day from as early as possible to sometimes 12 at night.

We wanted to catch the Christmas season. We had already made all these huge orders to try and take advantage of the fact that we weren’t going to pay duty, and the only way we thought we could gain back some of what we lost down at our other building, in terms of the looting, was try to sell as much volume in as short of time as we could.

We also wanted to pass the savings: Whatever we got from the government, we absolutely let it reflect in our price.

ISmart was heavily looted. That store has a lot of small items, a lot of expensive iPhones, iPads, MacBook Pros — all of that was looted down there. The only thing left was maybe phone cases, a few printers. Whatever else was there was moulded and soaked with water.

Apparently that was completely raided, or stolen, [by certain employees of the BVI Ports Authority]. I thought, look, these people are going through hell as well, and [the Ports Authority] promised me and guaranteed me that they would reimburse us.

That absolutely was a drawback; it was discouraging. It’s like you’re on the ground and you say, “Hmm, well, maybe I should do this and get up.” And then while you’re doing that, somebody puts their foot on your back.

At that point we decided that we had to either go all in or we wouldn’t bother opening the store again. And we went all in, and thankfully it’s been very good.

Recently, though, we had another break-in — not this past Saturday but the one before. We had put bars on the windows that were never there before, reinforced the grill, we put in cameras. We knew the state of how things were after Irma and we were vulnerable.

They used bolt cutters, but they struggled. They took about eight to 12 minutes just to cut the locks. At one point they looked up and saw one of the cameras outside, and then one of them pointed at it and he just casually walked up and turned it away.

They’re clearly not afraid of being on the camera because they know as long as they’re not visible, in terms of identity, they’re fine. They had shirts wrapped around their heads and gloves, and Jordan slippers and socks.

I’m not gonna lie: My heart sank. On the way down to town [after receiving the call that we were burgled] I called the police. That was at 7:45 a.m. They arrived on the scene about 8:30. They took about 45 minutes to arrive.

My first reaction was, “Why on earth would it take you 45 minutes to get over here?” I can walk from there to here faster. They told us that they took a while to get here because they only had one vehicle at that time and it was out on patrol. You know, you’re eager to get in the store and see what’s going on, and you’re just there for 45 minutes looking at the front of your store busted in.

The same day we got robbed we put in one of those alarm sirens that’s motion-censored. If the glass is broken, it’ll go off. It’s also a system that calls the police when there’s a break-in.

This thing of getting iSmart up and running was a crazy effort between me and friends and family. A lot of people helped me. It was important for me to do it as well because otherwise I’d be sitting down doing literally nothing, waiting for an insurance cheque for the house. But it’s super discouraging to do business here.

If people break in and get caught, that’s one thing. But they break in and nothing happens. If they loot, they get community service. It’s just incredibly discouraging.

Between the looting and inventory robbery at the Ports and this robbery, we’ve been robbed at least five to six times in the last five years. Only one of [the culprits] got caught. And that’s because he got cut on the way in and there was actually DNA evidence.

There are a lot of things we can do better. I think we play a little too much politics in the Virgin Islands with our police force. They’re undermanned, underfunded, and low on morale.

Anywhere you go in the world, security is a fundamental part of a functioning society. That’s not something we should joke around with or play politics with. I just think we need to take our police force seriously. The immediate thing we need to take seriously is crime prevention, and we don’t have the tools to do that right now.

I’m not gonna stop. We have something that’s working for us here. This business has been going for my cousin and me for the last five years and it’s been going well, we’re thankful for that.

But we get robbed so often, and we put in any procedures we can, and it doesn’t seem like anything helps.

Right now Varieties is still up in the air. I’m trying my best to get everything ready so that when we do move iSmart, immediately I’ll try to roll that store into this place.

I have sent my father pictures of the store and he’s happy. He’s glad I’m keeping myself busy. But I know in his heart he’s waiting for me to say I have Varieties Apparel back up and running.

It’s just his thing. It’s something he ran for 40-plus years and he was incredibly proud of it. And for that to be stripped away in a year — in a day — it was heartbreaking for him. I know he’s eager to know if I’ll get it up again.

I know this is gonna sound silly, but we kinda wanted to keep this building alive in a way, so that it feels like the store is still ongoing. ISmart has a lot to do in the role of the reopening of Varieties Apparel, if it does happen.

This article originally ran in the Beacon’s May 3rd print edition.