In their Words: Doug Arter

Doug Arter, the founder and owner of Journeys Health Spa, lost the space that housed his business on Main Street after Hurricane Irma. But since the storm, Mr. Arter and …

END_OF_DOCUMENT_TOKEN_TO_BE_REPLACED 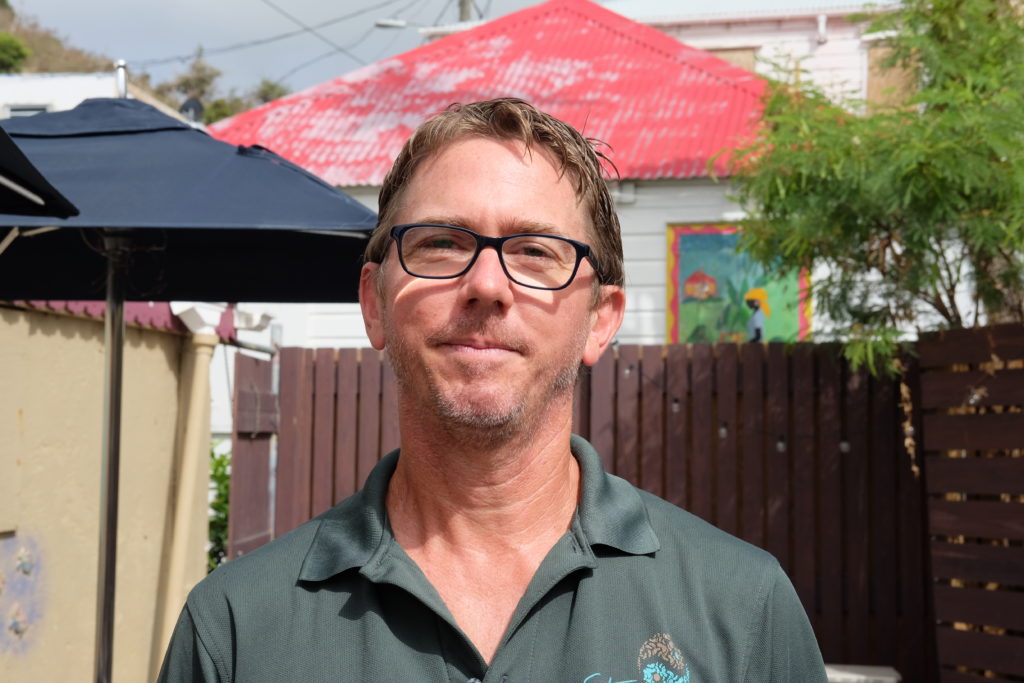 Doug Arter, the founder and owner of Journeys Health Spa, lost the space that housed his business on Main Street after Hurricane Irma.

But since the storm, Mr. Arter and his employee Levi James have been working to keep the spa going wherever they can — and continue to give back to the community despite losing their own building. Two weeks ago the business gave free massages to All Hands and Hearts volunteers in Cane Garden Bay.

The following are Mr. Arter’s words, condensed and edited by Amanda Ulrich.

In 2003 I first opened in Pasea next to Island Paints. I opened that office with a chiropractor and we shared the space together for about eight years. I finally moved to Main Street in 2011 and have been there ever since.

The spa was right here on Main Street, right next to The Island Sun newspaper, and we were on the top floor. [We and the business below] were both damaged pretty bad because the roof completely blew off and then the water settled in our space and crept downstairs and created a big mould problem.

So a few days after the storm when we were able to drive again, I came in with one of my employees and cleaned up everything that we could, salvaged everything we could, like massage tables and some of the smaller equipment.

I left a couple of days before Maria with my wife and went up to the United States and stayed with family. We came back in February. It wasn’t intended to be that long, but that’s how things worked out.

In the meantime, right after the storm [employee] Levi [ James] stayed here. I knew I was leaving the business in capable hands with Levi, but it’s hard to be gone so long.

Levi continued to work. He did a lot of volunteer services independently in the weeks after the storm, like on the roadside. After that, he continued. We have regular corporate clients where we go to their offices, and he reached out to them and they had him come back in right away.

In the beginning he did free of charge, stress relief massages on the side of the road. Al Broderick was making food for kids, and they were kind of tandeming together. And there was another massage therapist working with him.

We’ve done community service complimentary messages at health fairs and through Rotary and through government over the years and it’s our way of giving back to the community. We donate gift certificates to certain organisations as well.

Since I’ve been back after Irma, we’ve done a couple more community service things like that. The most recent one was [free massages for] All Hands and Hearts over the weekend.

It was good to meet the volunteers. They’re really a great organisation and they’ve been doing a lot. It was actually Levi again who set it up. He one day sent me a text and said he had spoken with the people there and wanted to do some volunteer services for them.

I said: ‘Set it up and I’ll be there.’ Levi’s been a key player in that regard.

Some All Hands and Hearts volunteers have come and gone, and others have been here throughout the whole project. Originally Levi anticipated about 16 people would get massages, and in the end I think we did 11 or 12. They’re still located in the school in Cane Garden Bay so that’s where we did the massages.

They were excited, they were grateful, and said it was much needed because they’re doing some heavy construction work and cleaning lots of debris still. I think they appreciated it a lot. We’ll probably do it again before they leave, and try and get the other volunteers in who didn’t get their chance.

Levi did secure a temporary location in October in a nail salon that had extra space, and they rented out a room to him for a couple months. When I came back, one of my clients who is a member of a small gym in Fish Bay connected me with the owner, and we’ve worked out an arrangement to use that space.

We’re all working out of the gym now, and we still do house calls and go to people’s homes, go to meet tourists wherever they’re at, as well as meet with corporate clients. So we’re making it work.

I miss [Main Street]. I miss it a lot. Being outside of town, people can’t just drop in on their lunch hour so easy. But it’s been good because we picked up some new clients.

Levi was actually doing some volunteer work at Cedar International School for teachers as well, so he picked up some clients through that.
So it’s all good.

The landlord is putting a new concrete roof [on the old building] and we’re hoping to go back in there. We’re trying to work out the build-out of the inside now, and refitting it.

I’m working on finding out information from the owners. They’re quite busy with all the other properties they have, but the roof is finished. I’m hoping within two months, maybe by August, we’ll be back.

We’re keeping our ears and eyes open for other places that might become available before then, so it is possible that we might not be back on Main Street. But I like it there.