In their Words: Edward Childs

Mr. Childs is a director at Smiths Gore’s Virgin Islands office. Like many businesses throughout the territory, the real estate consultancy firm operated quite differently in the year after the …

END_OF_DOCUMENT_TOKEN_TO_BE_REPLACED 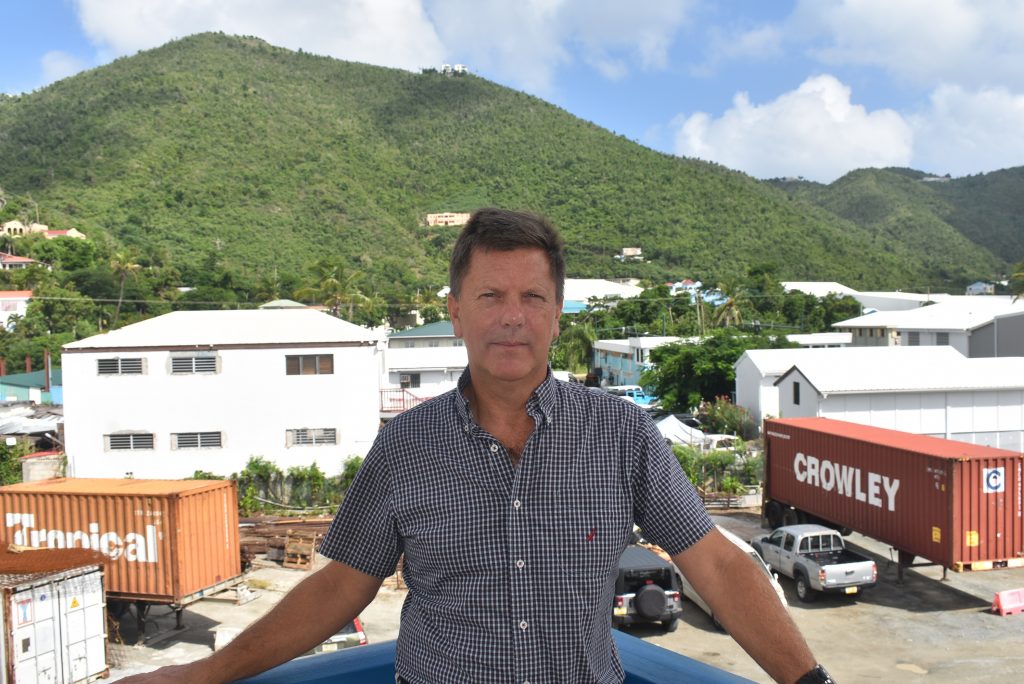 Mr. Childs is a director at Smiths Gore’s Virgin Islands office. Like many businesses throughout the territory, the real estate consultancy firm operated quite differently in the year after the passage of Hurricane Irma. These are Mr. Childs’ words, edited and condensed by Conor King Devitt.

I came here in 1990, 28 years ago. I’ve always worked for Smiths Gore. I have a house here. I bought a house in 1998, which we’re in the process of rebuilding. [We’re] hoping to move in at the end of this month. Smiths Gore had been operating [here] since the 1960s. I think my role was I was the first person to be dedicated to commercial property: building up the commercial side; dealing with anything from commercial sales, commercial valuation, management rentals. I specialise nowadays in commercial property consultancy, acting for private individuals who’ve invested in the BVI; taking a project through the development process. We also work from here throughout the Caribbean on valuations and sales.

Within the BVI it’s mainly dealing with individuals. We do asset management of estates and development consulting work. I do a lot of work on marinas. I was working for a company called Savills in the UK, an international real estate company. Coming out here was totally different, but it’s getting into the kind of real estate that’s interesting for me. I am a chartered surveyor. A chartered surveyor is a professional property designation: It’s like the property professional equivalent of being an accountant or a lawyer. I was just going through my training [before coming to the VI] and there was a new area of chartered surveying called marine resource management, so I was interested in that. It is an enjoyable lifestyle [in the Caribbean]. Eventually a place becomes home. My children have grown up here.

Our old building [on Main Street] was badly damaged, and we’re very grateful for Meridian Construction hosting us. In the immediate aftermath it was just a core of us who were here to reestablish the office and make contact with clients and just start the business up again.

We were all very concerned about what was going to happen with the BVI. It was very clear very quickly that our roles would continue because there was demand from clients who had houses here, and most live overseas and needed assistance with everything from securing their homes, finding contractors to go there to make the place watertight. There was a whole host of things for only the real estate firms to do.

Some of our next roles were finding people homes, whether that’s offices or people who had no home and needed somewhere to rent. That was probably six months of just trying to house people.

Since then, we’ve seen a lot of activity on the residential side. For example, you’ve got people who’ve had their homes damaged, they live overseas, they have no practical way of rebuilding, they were insured, and they’ve got an insurance cheque. So it’s easier for them to put the house on the market as is. There’s been quite a strong market for that kind of product. People just want out and there’s been a lot of demand from the local population, as well as [other] residents, for that kind of property.

The real estate market was active fairly quickly in the months after Irma, both on the rental side and on the sales sides at a time certainly on the sales side when we thought maybe there wouldn’t be any activity.

It’s difficult to say what happened to the market pricing-wise because it’s just a different market. Pre-Irma, everybody was looking for normal homes. Now they’re looking mainly at damaged homes. You can’t say that values have fallen: We’ve just got a different product. There’s been demand for what has become available, provided the seller is being realistic with what they can achieve for a damaged property.

I suppose the question is how long will it take for the inventory of damaged homes to be sold? That could take a while.

I think the other issue is the market to the overseas investor tends to be more seasonal. There will tend to be people coming through in the high season, but they also need somewhere to stay, and with hotels being closed you’ve got fewer people coming through. On the whole, we feel positive about where things are headed as an industry. I think it’s opened opportunities which weren’t there before.