Entertainment > In their words: Eileene Parsons

In their words: Eileene Parsons

Eileene Parsons was one of the first two women to be elected to the Virgin Islands legislature, after which she became the first female government minister. She also spearheaded the …

END_OF_DOCUMENT_TOKEN_TO_BE_REPLACED 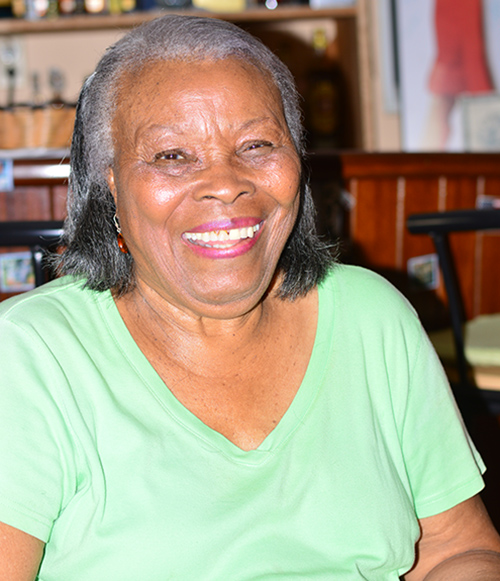 Eileene Parsons was one of the first two women to be elected to the Virgin Islands legislature, after which she became the first female government minister. She also spearheaded the establishment of the territory’s community college in 1990, and she has been a member of the school’s board of governors for more than 20 years. Earlier in her career, she worked as a cultural officer, founding the BVI Heritage Dancers more than 35 years ago. More recently, she served as a member of the committees that selected the territorial song and the national dress.

My name is Eileene Lucia Parsons. I was originally a Stevens, married to a Parsons. I was born here — Manchester — a little bit over there above the church, but I didn’t grow up here. I grew up on the other side of Pillsbury Sound in St. Thomas. I completed the Charlotte Amalie High School in 1949. The very next year, I married my boyfriend, who was from West End, and relocated to West End. We met quite by accident in 1947. I was at the post office in St. Thomas with friends. I was in the 10th grade. They went in to buy their stamps and I stayed outside leaning up against the wall, and when I looked up I saw what I, at 17, thought was the most handsome young man I had seen.

I grew up in St. Thomas, and looking back at it St. Thomas was a wonderful place to be a child and then a teenager. It was safe, very safe. I lived with some people on a place called Sugar Estate, which was outside the boundaries of town, and I could go to dances at the high school with my then boyfriend and walk home any hour of the night. The only thing you might meet on the road was Mr. Lockhart’s cows, which was rare. It was a very safe place to be.

When I moved back here in 1950, there was no work in West End for me, so I moved to Road Town where, because I had secretarial skills, I got a job with the government. Before then, for three months I worked for a gentleman by the name of Mr. Sergeant at his grocery store. I made a grand sum of $10 a month. I could live on the $10 because I lived with my aunt. My husband was still at West End teaching. The commissioner’s secretary got ill and he wanted somebody who could take shorthand, and fortunately I had learned that in school and I could do that. I was called and Mr. Sergeant said I should take the job. It was more money, and the more money was $30 a month.
We had fun. In those days you could go to picnics; there were dances on the Friday nights. St. George’s Church hall was the premier dance hall of this place. Going down the hill to Baughers bay, there’s an old rotten down building that used to be St. Phillip’s: That too was a dance hall. We made our own fun.

I had done Spanish for three years in high school. At some point, the Spanish teacher at the high school here decided to go back to England, and the kids had nobody to teach them Spanish. Dr. Norwell Harrigan said, “You did Spanish in high school; you are about the best we have. You are going to have to go to teach those kids until we can get a teacher.” I said I had never taught school, and he said I would learn. That was my introduction to teaching. I actually taught Spanish from form one to five for nearly five years. I actually fell in love with teaching.

In 1965 I took my kids back to St. Thomas and I stayed until 1975. I accepted a job with the Tourist Board in 1974. They advertised for an executive secretary, and I wanted to come home. I saw the advertisement, I applied and lo and behold, I got the job. The Tourist Board was almost nothing then. We had a little office with a white fellow, Richard — I can’t remember his surname. He was the person in charge. I believe we had an office in London. We didn’t have representation in New York.

I thought I was accepting a secretarial position, and when I came I found that I was expected to travel and sell here as a destination. [I] was actually director of tourism. I started traveling the world. I had a lot of fun, but I learned something: When I went to the different trade shows, I would meet my counterparts from the different Caribbean islands and all those people had professional training in tourism. I said, “No, this wouldn’t work.” I had to get tourism training. I needed to be more versed in advertising this country. Mr. Ralph O’Neal okayed for me to go back to school. I came back and worked in the tourism business for two years.

Cultural officer
One day, Charles Wheatley called me and said, “I have a position I want filled; it is something new and I believe you are the best person I could get for this position.” He said our culture was being diluted and he would like to get a cultural officer. I left the Tourist Board in 1983, and in May 1984, I became the first cultural officer. I put dance and plait pole back in the schools. I had done all those things in school in St. Thomas.

In 1988, I got a call saying Chief Minister Lavity Stoutt wanted to see me. He had remembered me when I came home. He said he called because he had a job for me. He said, “Lady Eileene, I want a college for my people and I am putting it in your hands and I expect you to deliver.” I had worked at the college in St. Thomas from its infancy: I was the dean’s secretary. I got an associate’s degree while I was there, and I used to teach business English while I was there.
The first of January 1989, Mr. Stoutt moved me from being a cultural officer and put me in an office at Customs on the waterfront and gave me a computer. He told me I didn’t have to worry about money. Long story short: Jan. 14, 1990, the college had its opening ceremony, and Jan. 15, the college opened in rented places at the Omar Hodge Building with 105 students.

Political life
I got this crazy idea in 1995 that it was time for women to get in the Legislative Council. I told [Dr.] Wheatley that I wanted to contest in the election. The college board told me they’d give me time: If I didn’t win, come back to my job. If I won and I wasn’t a minister, I could come back and work with them. If I was a minister, they would expect that I would resign. I know they were praying I wouldn’t win. I went at-large and I won. I was the first female at-large representative, and EthlynSmith was the first district representative. On the 25th of February, I was sworn in as a minister — the first lady in 30 years of ministerial government. There was those who thought I wouldn’t have been able to handle it, but I had good permanent secretaries and I wasn’t a fool. I was able to make some good decisions that helped. I was the one who brought in the home health care, where caretakers went to the homes of the elderly three times a week. I was the one who started the dialysis unit: It was in the Rita Frett-Georges Building. I built the horse race track.

Legacy
I honestly would like to be remembered as being a friendly person. I feel good that people feel comfortable coming and associating with me. I would like to be remembered as somebody who was approachable, and also as someone who was willing to help wherever and however I was able to help. I maintain that people helped me, and if people didn’t help me I would not have been where I am today.