In their Words: Governor Gus Jaspert

Mr. Jaspert was sworn in as governor on Aug. 22, 2017, 15 days before Hurricane Irma decimated the territory. This is his account of the storm, condensed and edited by …

END_OF_DOCUMENT_TOKEN_TO_BE_REPLACED 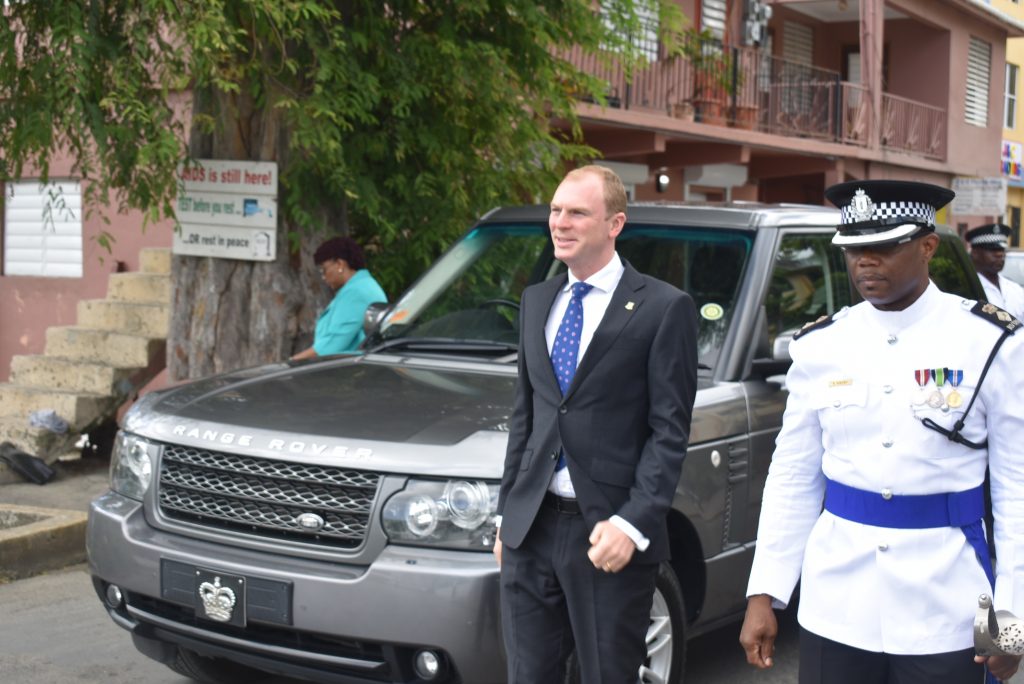 Governor Gus Jaspert walks towards the House of Assembly to deliver his second Speech from the Throne on Thursday. (Photo: CONOR KING DEVITT)

Mr. Jaspert was sworn in as governor on Aug. 22, 2017, 15 days before Hurricane Irma decimated the territory. This is his account of the storm, condensed and edited by Conor King Devitt.

It actually starts a little bit before the hurricane, because obviously I had arrived two weeks before. It was about five or six days out when we knew this was turning into something big and something that’s coming towards us. [Next was] activating the National Emergency Operations Centre and moving into emergency preparations fully; then making the decision with the premier, with the advice of Sharleen DaBreo, to encourage the evacuation of Anegada. That was sort of the first decision point to make because the risk was Anegada was low-lying, and we had predicted heavy storm surge. So the run-up was intense because I was obviously new into the role, but everything was focused on how do we get our preparation as firm as possible, getting the legislation ready that we might have needed, getting all the shelters in the right place, getting communications out to all the islands. Then, on a personal level, once it moved from the territory-wide stuff, we had our preparations which we definitely had to do. We had the family, we had Maria [Mays] at the house; we had another family from the staff team moved into the house as well because they were in a low-lying area. And then another member of staff joined us on the day as well when we realised what this was going to be.

There were 10 of us, plus a dog, including my two boys, Oscar and Tobias. We stocked up supplies, [and] once it hits, you’re inside the house. For the first half I was communicating with the NEOC, so we had communications still going, so that was priority to try and keep messages going — try to get an assessment of what was happening. We were obviously tracking what we were seeing.

I think we’d heard from Anguilla about what happened there and had some footage, so we had an indication of how bad it was. We tried to pump messages out [to people], as [did] Sharleen, to try to stay sheltering because we were going to directly get the eye: If there is a period of calm that is not the end. We told people, “Don’t go out.”

Government House is quite a strong house, but the little CCTV screen that shows [areas] around the house slowly, camera by camera, got blown off. You start to see that happening — and then the almighty crashes. My son’s room blew in, and the sitting room. I think the neighbour’s roof actually came off and came into it. That was the first half of the storm. At that point, we then all went into essentially what was our bathroom area. First we were in the bathroom area and then during the eye went to look at the house [and] realised that one side was compromised: The doors, windows had gone. So we all moved into essentially the wardrobe of the bathroom. We had our VHF radios [but] they died during the eye. The last communications was up to the eye point, where we still had WhatsApp, still had phones.

On a personal level, at that point you’re governor but you’re also dad. To keep my boys happy we were singing songs, we were trying to drown out the noise of the hurricane outside; trying to not answer the question of “What was that big bang?” The answer was that was my son’s bedroom going, which I didn’t particularly want to reveal to him. And then hoping that the house held. The place that we were in — it did hold obviously, but as the wind got stronger, particularly [during] the second half when the storm comes back — that was the bit we all got the most worried, because the window had a shutter but the shutter was flapping. You could hear it. So that was the risk because we were all quite vulnerable in that place. At that point we were all in a closet.

I remember us frantically removing any glass around us and trying to shove anything we could that did come in — any flying objects — into drawers and stuff like that.

So that was the storm itself. It was my first hurricane, the family’s first hurricane. The noise was the thing — it sounded like you were standing next to a 747 jet engine inside the house. Everyone had that.

[We stepped] out of our closet once we thought it was safe to do, looking out at one of my kids’ rooms that did stay intact, the youngest one’s. Looking out of the back, we could see the NEOC building had gone. In fact, the last message I’d had from Sharleen and the police commissioner was that they were having to evacuate NEOC, so I hadn’t heard from them and I was frantically trying to reach them to make sure that they were okay.

I was worried about them but also as soon as you look out on the back garden you could see the level of destruction and damage. I have to admit my first thought was, “God, how many have died?” It’s tragic and very sad [about] the four lives we lost. It also could’ve been a lot worse, and that was my first thought that we may be dealing with.

Kicking into gear of support was the immediate priority: I think it was about five minutes after we came out of the room, [we] tried to reach NEOC. Couldn’t. Had no communications inside the islands. We managed to get ahold of London. We had a couple of minutes with the cell phone working and I managed to ring Downing Street, the prime minister’s office in London, to inform of what had happened. I reported that I believed there had been a devastating hit.

We weren’t sure about communications, but my priority was to save lives and respond to the situation here. That was the initial message that we got [out]. And then a couple of minutes after that, Deputy Fire Chief [William] Penn came in through the front door of our [house] to come and check on us and to take us to Peebles at the same time Police Commissioner [Michael Matthews] — who had to run during the storm (he’d been in the NEOC and then [Mark] Vanterpool’s house) — managed to smash in one of my last remaining windows by doing the police way of getting into a building: kick the window in. I tease him [that] I should send him the bill. One of the few windows that Irma didn’t get, Mick Matthews did.

[When I was] walking out, the storm was blowing quite a bit. Everyone else stayed inside. I remember walking down [to Road Town]: The trees and lines were down. I saw the Nibbs family, and their house had sadly been [destroyed]. We checked if they were okay and then tried to make it to Peebles Hospital. At that point there were more people arriving: the first casualties coming in. And then we were into Peebles.

Getting to Peebles, I was still trying to frantically to contact the premier and Vanterpool. At that point the commissioner had told me the NEOC was safe and had moved to Vanterpool’s. I was trying to get messages to them to come to Peebles and establish operations. The commissioner and I walked briefly down the road, and at that point we realised sadly there was looting starting already. That was probably about 6 o’clock. I walked down the road a bit with him to check on headquarters, which we could see was gone.

Getting NEOC set up

I went into the hospital [and] managed to get ahold of the premier and get him to come to Peebles. He joined and then I think the first thing I did, we had NEOC [established] in the basement of the 911 centre. It was flooded. But down there I was trying to stay calm and agree on a plan of what we were doing. The first thing was immediate response: trying to get updates from the fire service and police on if we had loss of lives, are people trapped, are there areas we need to try and prioritise to get into. And then the security situation: We wanted to make sure that didn’t become an issue. I agreed with the premier to declare a state of emergency that evening. I had asked in advance for the paperwork to be done. And then we agreed on a routine for how we try and get communications out: We would try and get the public servants to know that government was operational from Peebles Hospital and set up a routine — because communications were so bad — to meet at 8, 12 and 4. We tried to get any word from the sister islands. We also were aware of [Hurricane] Jose hitting. That was the other thing that evening: I remember being told about Jose coming in three days. Whilst we were dealing with the immediate [response] that evening, I was also thinking about the point of operations trying to get the word out about Jose — shelters and things like that.

[We] agreed that evening on the list of priorities, which was, number one, immediate response: make sure no one was trapped and [people] got medical care. Number two, make sure we got food and water to people in shelters. Quite a few people had moved into the shelters after the storm. Three was making sure security didn’t become an issue and four — in the early days — was getting communications back, particularly with the sister islands. I remember getting back to [Government House] about 2 in the morning.