Local News > In their Words: ‘Guess what? I locked myself out.’

In their Words: ‘Guess what? I locked myself out.’

Michael Masters, the founder of Nautool Machine Limited, recently sold his business and retired. Last September, he spent Hurricane Irma alone in his house in Cooten Bay — and found …

END_OF_DOCUMENT_TOKEN_TO_BE_REPLACED 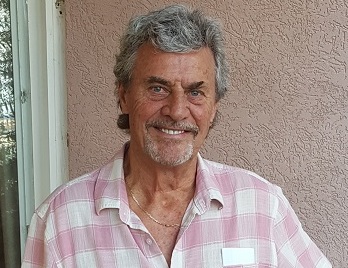 Michael Masters, the founder of Nautool Machine Limited, recently sold his business and retired. Last September, he spent Hurricane Irma alone in his house in Cooten Bay — and found himself in a precarious position. These are his words, condensed and edited by Conor King Devitt

I have a really nice home over on Cooten Bay, and friends and family were all away [during Hurricane Irma] and I was on my own. I wasn’t concerned too much about the storm. I’ve been through many, many storms in the BVI and I’m known to be a bit of a MacGyver. My business is problem solving and so on. I’d done my preparation.

And then it started. Sure enough, the eye went directly over my house. I’m not sure how long the first side lasted, but I did start to get very concerned. I had my spot where I was hiding in the main part of the house, in the pantry. I had all my tools close by: ropes and machetes, chainsaw, hammers, nails, power drills — all kinds of tools around me. And I waited. Then I noticed the front door was trying to blow out and so I used the rope that I had there and tied the front door to an interior column in the house. Well, that wasn’t good enough, because the door was still trying to blow out. Then when I saw the pool water literally emptying out — I saw waves sucked out of my pool — I realised it was getting bad. Then all of the sudden the eye [arrived] — bingo. I’ve been in probably two other [hurricane] eyes here in the BVI, passing over the other home I had here, so I knew what to expect. So I figured, “Oh, I’m gonna fix that door because for sure it’s gonna go.”

So I go outside, and I had a piece of two-by-six wood ready because I’ve done that in the past. In fact, the roof in a previous home was lifting off and I saved it with a piece of two-by-four, hammering it to the walls. So in this case I go outside and I got the two-by-six, put that across my beautiful varnished front double doors, and found some long screws. Using the power drill, I used the drill bit first to go through the wood and get a nice clean hole — and then, using six long screws, screwed the front door shut. The two doors were screwed to each other. I’m still in the eye. I have no idea when the other side was coming. Then I realised, “Guess what? I locked myself out!” Because I’d ran around the house to go back in the back door and realised it was locked. So now I come to the front door and I try to unscrew what I’d already screwed up. And of course, the screws stripped. They were into a solid, hardwood front door and were not budging. I was starting to get nervous.

Outside in the eye

I survived, and it was kind of funny. In my words, “I screwed myself out. I was screwed, literally.” Of course, when the backside wind came, it did not affect the house. The wind came from a different direction and didn’t bother it all. So the whole thing was futile, but I’m telling you it was not funny when I was locked out.