Mr. Lutawan, 21, works with his father Komal, who is known as “Smiley,” in his garage in Baughers Bay. After Hurricane Irma, he helped to repair the BVI Red Cross’s …

END_OF_DOCUMENT_TOKEN_TO_BE_REPLACED 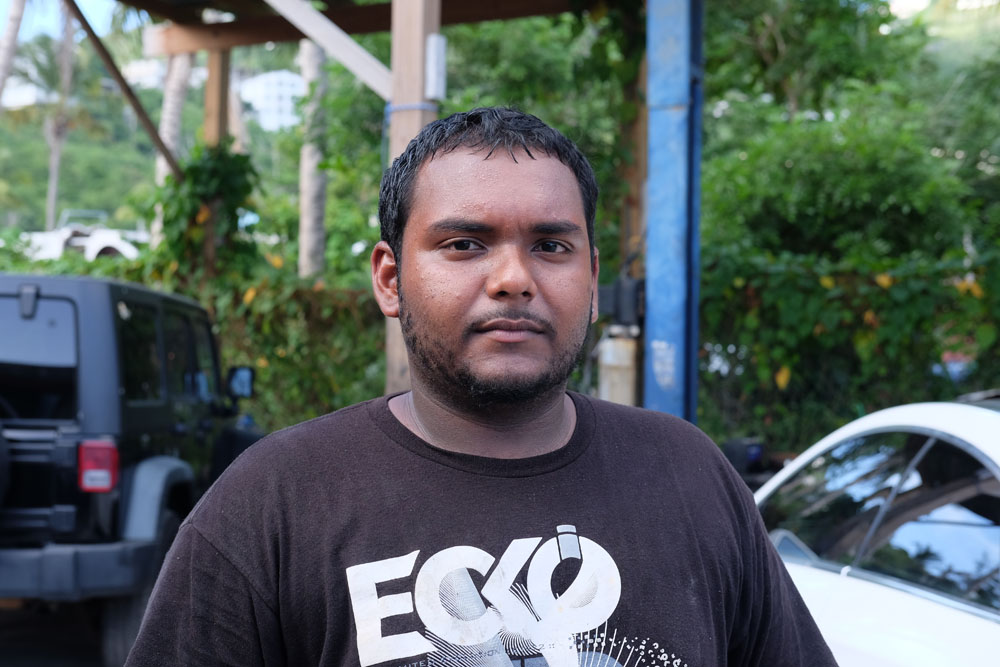 Mr. Lutawan, 21, works with his father Komal, who is known as “Smiley,” in his garage in Baughers Bay. After Hurricane Irma, he helped to repair the BVI Red Cross’s fleet of vehicles, even sourcing certain parts from his own Land Rover. Below are his words, condensed and edited by Amanda Ulrich.

I’ve been working for my father for five years now — after school, holidays, finishing up — and now I’m full-time with him. We’ve had this particular shop for about four years now.

I think the reason why people have come to trust us is because of the way my father deals with the customers. He explains to them and tells them the exact problem, and how we encounter it. We try to actually help them to save money instead of keep spending, so if we see a way out of a difficult situation we’re going to try to go the easy way first, then the difficult way if we have to.

And if you call him, he will be right there — even late in the night. There was a time at 12 o’clock at night when we were just sitting down, hanging out with some friends, and a guy called. He was sunk right in a ditch, and my father said, “Let’s go: Grab the jack and grab the tools. Let’s go.” The guy said we needed a backhoe to lift the vehicle out, but when we went to the site we didn’t need a backhoe, we just lifted the vehicle up and put it back on the road.

During the first two days [after Hurricane Irma], we were fixing up our home and bringing family members up by us. And then, after those two days, we just came down and started working on the shop. We spent a day cleaning, and the next day putting back the roof and the walls [of the garage].

The first job I did after the hurricane was fixing the Red Cross Land Rover. We had to go up to the hospital, and there we had to get the vehicle moved from point A to point B even though it wasn’t starting. We had to push it out of a little gap, down the hill so my father could get it jump started, and drove it straight to the garage nonstop. There was no source of parts anywhere, but we had a couple old starter motors that were mashed up. So we got it, and we stuck in the starter motor.

[The Red Cross] had another vehicle break down the following day, and luckily I had my own Land Rover in the back — I was going to fix it up as an antique — and they needed a clutch. During that time, nobody had a clutch either. So I had to take the gearbox out of my Land Rover and put it in their Land Rover so we could give it to them right away.

After I fixed those Land Rovers for the Red Cross, we just did tyre plugging, because a lot of people needed [holes in] tyres plugged. Then after that we started to see people bringing in [cracked] glass, electrical computers that had gotten wet. We were actually helping out the Marines at the emergency shelters, starting up generators. There was a lot going on. People would say: “Look, there’s Smiley, he knows a lot about engines.” And they’d stop and come and collect us, and we’d work on the vehicles, the generators. It was fun.

I noticed with all the vehicles coming into the BVI, everything is just fully electronic. So with electronic vehicles now — say, for instance, a Mercedes Benz — if you change a fan, you’re going to have to reprogramme it. It’s not like you just take the fan out, put a new fan in and it works. So it’s gonna be complicated in the future. I’m not gonna lie. There’s a lot of work you have to do, a lot of reading. Every year you have to keep up on updates — just like Facebook.

Right now I’m looking at going to college overseas to study. I recently went to Canada for one month, so I’m looking to go to Canada to study automotive performance. But if I can’t get into Canada’s [educational] system, I’ll go to England and study diesel engine hydraulics and other heavy-duty engines and machines.

I would love to do this kind of work. Maybe one day I could take over [the garage]. You know, you can’t really tell the future so I’m just going to see where it goes. But if I come back, I’ll be happy to run the garage.