Local News > Incinerator back up after weeks offline

Incinerator back up after weeks offline

The Pockwood Pond incinerator is burning trash again after being offline for about six weeks, during which residents complained frequently about the fires and smoke from the landfill behind the …

END_OF_DOCUMENT_TOKEN_TO_BE_REPLACED 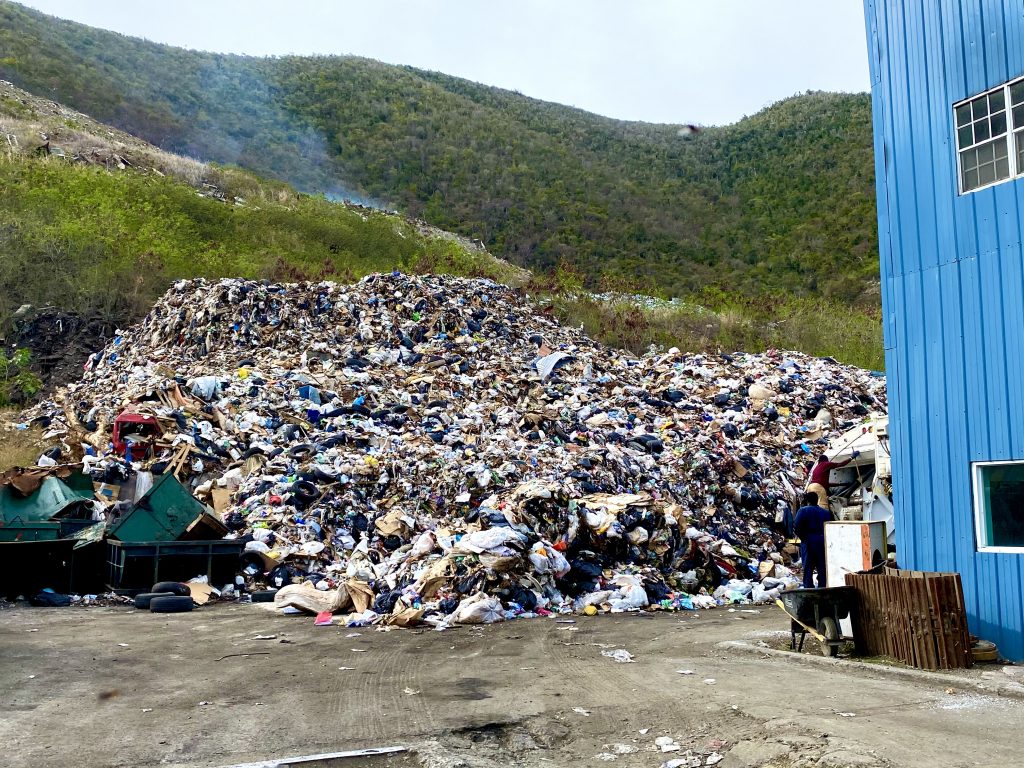 Smoke drifted past the incinerator in Pockwood Pond on April 6 before the facility was repaired this week. Now it is working to process a backlog of trash, some of which is piled behind the incinerator building, above. (Photo: DANA KAMPA)

The Pockwood Pond incinerator is burning trash again after being offline for about six weeks, during which residents complained frequently about the fires and smoke from the landfill behind the facility.

Since the faulty hydraulic pump that caused the March 1 shutdown was replaced this week, the incinerator has been working to burn a backlog of trash, Department of Waste Management Acting Manager Neville Allen told the Beacon on Monday.

Mr. Allen explained that the replacement pump had to be shipped into the territory, a process slowed because of the pandemic, but it arrived last weekend.

“We started back up today,” he said on Monday.

Teams took it slow when restarting the incinerator, but Mr. Allen said they eventually were able to bring it back up to full capacity.

Still, as the only incinerator for the entire VI, it will need time to deal with the garbage that accumulated during the shutdown, he added.

The shutdown wasn’t the first in recent years. In November 2018, a fire damaged the machinery and left it non-functional for more than a year.

But in January 2020, a new control panel was installed, and the plant eventually resumed operations, according to the manager.

Mr. Allen said on Monday that when the plant was functioning properly in the past, the newer incinerator on site could process 100 tonnes of garbage daily and an older one could process 40 tonnes. But the older machine has been taken offline, he said.

“It was decommissioned last year,” he explained. “We took it apart because it was way beyond its lifetime. We couldn’t repair it.”

He added that he hopes another incinerator can be purchased to keep up with the new trash coming in every day and contend with the backlog, but government would need to find money in the budget.

St. John resident Sharon Coldren, who has complained frequently about smoke from trash fires at the dumpsite, said she observed “a huge glow in the night’s sky” coming from Pockwood Pond on April 5.

PurpleAir, an air-quality monitoring network that maintains an online record of the airborne particulate matter picked up by customer-installed sensors, recorded a minor spike in air pollution that evening.

Two sensors at Romney Park in West End noted peak air quality index values between 100 and 150 around midnight on April 5. At those levels, people who are sensitive to poor air quality may experience negative health effects if exposed for more than 24 hours, though the general public should remain largely unaffected, according to the rating system. Neither sensor, however, recorded such high values for an extended period of time, and the daily averages did not exceed levels where people would be expected to experience more serious health effects.

Ms. Coldren said for many households on St. John, structures are open air and not air conditioned, making it inconvenient or impossible for some people to avoid smoke from the VI. She was especially concerned for Tortola and St. John residents with asthma or other breathing problems who could be at risk, she added.

West End residents have long complained of smoke from accidental fires even before the incinerator stopped working in 2018. A build-up of trash at the Coxheath dumpsite following Hurricane Irma caused outbreaks that smouldered for four months.

Though the fires are better contained within the incinerator, the airborne health risks aren’t completely negated.

For more than a decade, politicians have been promising to install a pollution-control scrubber, which would filter potentially harmful particulates from the incinerator’s smoke.

In 2015, government signed a $1 million contract for the scrubber with the Virginia-based company Consutech Systems LLC, which also manufactured the incinerator. Government paid a $500,000 deposit, but no substantive progress has been reported since then.

Health and Social Development Minister Carvin Malone said in October 2019 that the scrubber would be in place in the first quarter of 2020, and Premier Andrew Fahie mentioned the plans the following month in his 2020 budget address. But the scrubber was not installed, and Mr. Fahie did not mention it again in his 2021 budget address last November. He did, however, promise a new incinerator.

“Funds have been allocated to procure, develop and assemble a new incinerator on Tortola to include all mechanical, electrical and plumbing works so that we can enhance the disposal of garbage in a manner that protects the environment and surrounding communities,” he said at the time, without providing further details.

Mr. Allen said no parts have arrived for the scrubber recently, and Mr. Malone did not immediately respond to requests for comment.

Mr. Allen said a key aspect of the future plans at the plant is finalising a proposed national waste management programme.

But this effort, too, has fallen behind schedule.

Mr. Malone said June 19 in the House of Assembly that plans for the programme had been delayed by the pandemic but were resuming.

Last December, he announced the completion of a waste-management consultancy with the Switzerland-based firm Agency Red — which he previously had said would draft a waste-management strategy for the territory — and he promised that a public consultation phase would start early this year.

“At the close of the consultation, the ministry will issue request for proposals for the collection of waste and other measures aimed in maintaining a clean and healthy environment,” he said.

No consultation has been scheduled, however, and the draft strategy hasn’t been provided to the public in spite of promises from Mr. Malone at least as far back as October.

Meanwhile, other organisations like Green VI have been able to help divert some materials from the landfill. Staff said in February that they had helped process 3,200 tonnes of recyclable plastics, aluminium and glass since 2017.

The non-profit organisation’s facility by the H. Lavity Stoutt Community College also recently dealt with an unexpected fire, but no equipment was damaged.

Mr. Allen encouraged community members to continue reusing and recycling, and to properly dispose of objects too large for trash bins.

“It is making areas very, very untidy, and it’s costly to go around and pick up all these items, when people already have them in a truck and could take them straight to the incinerator,” he added. “It’s really disheartening to see all this stuff around the bins.”

Under the management plan and accompanying laws, he said violators may have to pay fines for improperly dumping bulky waste. But he added that anyone without the means to transport such waste directly to the incinerator can contact the department at 468- 4934 to learn more about available collection services.

The Virgin Islands, he said, should put its best foot forward when reopening to tourists by presenting a clean, safe environment.