After two fires at the Pockwood Pond dump last month sent thick smoke over West End and beyond, Health and Social Development Minister Marlon Penn said May 26 in the …

END_OF_DOCUMENT_TOKEN_TO_BE_REPLACED 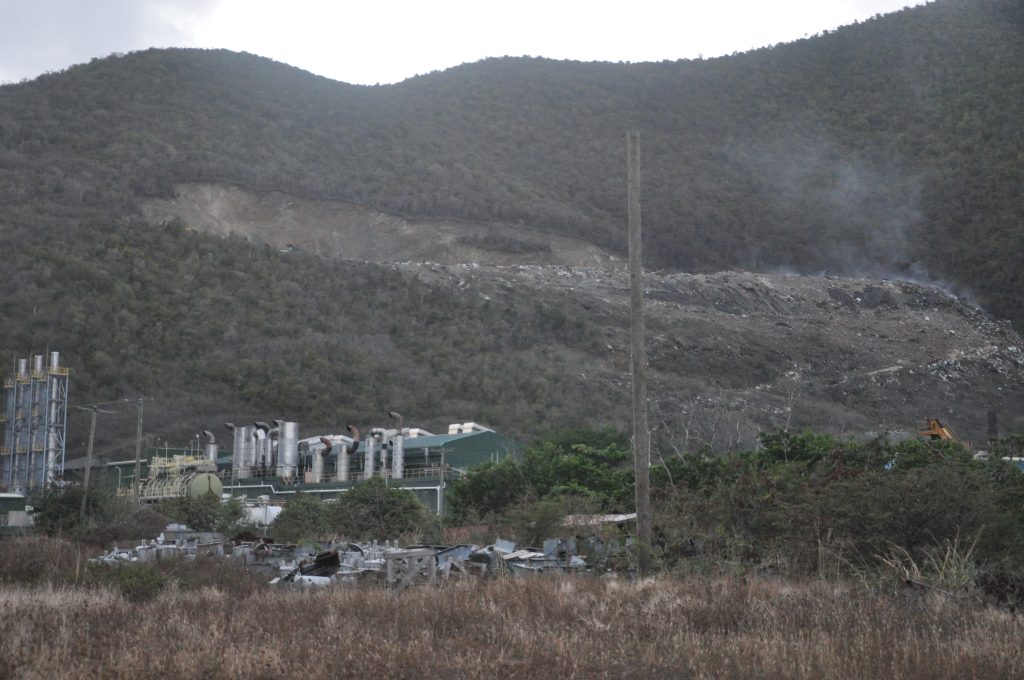 Smoke still rose from the Pockwood Pond landfill on May 21, six days after the start of a fire that officials said was likely caused by trespassers using blow torches to extract copper and other metal from trash. The next day, another fire started from spontaneous combustion, officials said. (Photo: FREEMAN ROGERS)

After two fires at the Pockwood Pond dump last month sent thick smoke over West End and beyond, Health and Social Development Minister Marlon Penn said May 26 in the House of Assembly that government had ordered materials to fix the broken incinerator and expects it to be repaired by the end of the year.

The first fire was probably caused by trespassers trying to extract metal from trash on May 16, the second by “spontaneous combustion” of untreated garbage on May 22, Mr. Penn said, adding that he is working to beef up security and operations at the facility.

In response to a question from Opposition Leader Julian Fraser about long-term plans for the incinerator, Mr. Penn said, “We have placed a high priority on resolving this problem.”

Then he recounted potential solutions — devised largely by the Recovery and Development Agency and the Scotland-based consultant John Wood Group PLC — for devising a more sustainable incinerator and landfill as part of a comprehensive overhaul of the territory’s waste system.

Successive governments have made similar promises before, but with the Pockwood Pond incinerator frequently offline, smoke and fires have for years been a regular health hazard for residents from West End to St. John.

Although former HSD Minister Carvin Malone previously said that he was considering issuing “quick bids” for mobile incinerators to be stationed across the territory while the main incinerator is repaired, Mr. Penn did not mention this plan during the HOA meeting, and he could not be reached after scheduling an interview with the Beacon on Friday.

At Pockwood Pond, the incinerator has been offline since a Feb. 14 fire destroyed the main control panel and electrical system, Mr. Penn said.

He added that the ministry is “in the process of procuring” replacement parts from Virginia-based equipment manufacturer Consutech Systems LLC.

The company, he said, had already been contracted to supply a replacement quench tank and ash conveyor, a heat exchanger, and three transfer rams, all of which are necessary for reviving the incinerator.

“Additionally, Madam Speaker, we are taking the necessary steps to purchase a factory replacement control panel, which is another critical piece of equipment,” he said.

Though Mr. Penn said he had spoken to Consutech’s president about expediting these shipments, he also cautioned that fabricating, shipping and installing the new parts may take months, especially in light of supply-chain disruptions.

Although the minister said that he expects the materials to be installed and repairs completed by the end of the year, Consutech has previously failed to make timely shipments to the Virgin Islands.

A pollution-control scrubber from the company, for which government in 2015 paid a $500,000 down payment, has never arrived.

Consutech representatives did not respond to requests for comment.

The incinerator was previously rendered inoperable after catching fire in November 2018, and despite Mr. Malone saying in July 2019 that a new control panel would be installed in six to12 weeks, the facility remained defunct for more than a year in total.

Even after a new control panel was installed in January 2020 and the incinerator resumed operations, the facility continued to suffer failures that left it shuttered for weeks at a time.

More recently, the February fire was sparked from an improperly discarded propane tank.

Mr. Malone said shortly thereafter that the incinerator would be down for about two to four months, but in March the Department of Waste Management upped that estimate to at least six months.

The May 16 blaze, he said, was likely caused by people who trespassed after hours and used blowtorches to try to retrieve copper and other metals from discarded items, he said.

“Given the high concentrations of methane gas on site, any form of intense heat applied in close proximity increases the likelihood of fires erupting,” he said. The minister discouraged others from engaging in such activities.

“Your actions are not only detrimental to safe operations at the dumpsite, but also have a damaging impact on the wider community,” he said.

To head off similar incidents, Mr. Penn said he is looking to enhance security measures by reinstalling cameras and hiring after-hours guards.

He also reminded the public that the facility is open to the public only from 6 a.m. until 4 p.m., after which only government-contracted operators will be allowed inside.

Meanwhile, the DWM has concluded that the May 22 fire started after unprocessed garbage was ignited by smouldering hotspots underground, Mr. Penn said.

As the incinerator repairs continue, Mr. Penn said government is working to expand the territory’s recycling programme and asking residents to reduce the amount of trash they throw away.

Meanwhile, he added, he is “seeking additional resources to meet the need for adequate daily supervision of the operations onsite.”

While responding to Mr. Fraser’s question in the HOA, Mr. Penn also said that government is working on a “comprehensive strategy” for waste management in the VI, though he did not specify if he was referring to the draft National Waste Management Strategy that was circulated last year.

“The ideal course of action,” Mr. Penn said, would be “to discontinue the unsustainable practice of hillside dumping,” while constructing a properly developed landfill and materials-recovery facility in a new location.

He did not offer any details about where the new facility would be located.

This plan appears to mirror some of the proposals that Recovery and Development Agency and government officials shared during an April 13 public meeting at Maria’s by the Sea, where they sought input on ideas for overhauling the territory’s waste system.

Among other options, officials said they were considering various measures: prohibiting garbage from being stored at Pockwood Pond and only using it as “a treatment location for tertiary waste;” achieving 100 percent redundancy by running two incinerators side-by-side; and identifying reclamation sites for dumping tertiary level treated waste.

However, they did not rule out the possibility of storing waste at Pockwood Pond, Cox Heath and Paraquita Bay.

The RDA and government’s proposals stemmed from an 18-month consulting contract with the John Wood Group PLC, which was tasked with creating a “feasibility study to develop a sustainable and modern” landfill, according to an August 2021government press release.

During the April 13 meeting, neither Mr. Malone nor RDA Director of Programme Strategy Dr. Neil Smith said how much the proposals would cost, and neither responded to requests for comment at the time.

Developing a more sustainable landfill was just one prong of the draft waste management strategy published in spring 2021, which rehashed many of the plans from a 2013 comprehensive strategy that was largely ignored.

Like the 2013 plan, the 2021 strategy recommended establishing the DWM as a statutory body; developing solar-powered recovery facilities to sort waste; implementing composting systems for organics; and helping fund the efforts with fees designed to encourage sustainability, among many other measures.