Last year was a “fantastic year” for Virgin Islands financial services, according to Simon Filmer, a BVI Finance board member and managing director of Vistra. Speaking to the Standing Finance …

END_OF_DOCUMENT_TOKEN_TO_BE_REPLACED 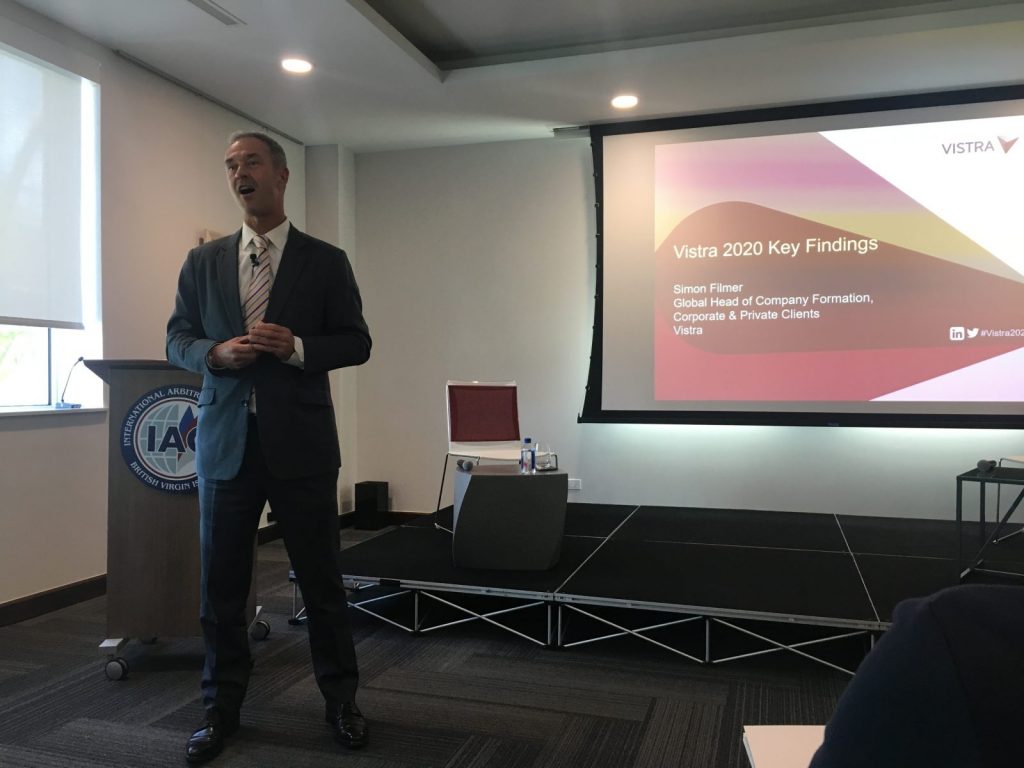 Last year was a “fantastic year” for Virgin Islands financial services, according to Simon Filmer, a BVI Finance board member and managing director of Vistra.

Speaking to the Standing Finance Committee late last year, Mr. Filmer credited government’s quick action on economic substance legislation for the 68 percent rise in new company incorporations in the first half of 2021, while at the same time requesting $1.8 million in funding to cope with further changes on the horizon for international finance, according to a recently released report on the closed-door SFC proceedings.

Mr. Filmer told legislators that the incorporations spike last year will directly generate “several million dollars additional for the government revenues and lead to future revenues in the year to come,” the report noted.

He apparently wasn’t entirely successful: The budget estimates for 2022 show that government has allocated $1.4 million to BVI Finance — up from a total of $1.2 million last year.

During the SFC deliberations, Mr. Filmer also explained why he believes the agency needs the requested money.

“Two very important elements for BVI Finance are ‘promote’ and ‘protect;’ both are absolutely vital,” he said.

However, with the current funding, he said, BVI Finance “can only protect.”

He explained that with the requested amount, the agency would be able to both protect and promote the industry.

He thanked the Premier’s Office for “an additional subvention” during the course of 2021, explaining that the funds were being used on projects that would demonstrate to potential clients the value of VI structures. The SFC report did not disclose the amount of the subvention.

In response to a question from Natural Resources, Labour and Immigration Minister Vincent Wheatley about why incorporations had shot up in the first half of the year, Mr. Filmer praised the VI’s choice to rush through economic substance legislation in 2019 and 2021 under the threat of European Union blacklisting. The moves, he said, had appealed to clients, and since then the market has grown accustomed to the changes.

Now, he said, competing jurisdictions such as Jersey, Anguilla, the Cayman Islands and the Bahamas “would love to see BVI Finance not be funded and not be out there in the finance market.”

More funding would help the territory stay ahead of future changes from abroad, and help continue growing and promoting the industry, he argued.

“At this point we have a sweet spot, having made changes before more changes come,” he added.

BVI Finance CEO Elise Donovan also gave a presentation to the SFC, announcing that the agency is focusing on “enhancing human resource potential,” including increasing the ranks of Virgin Islanders at the executive level in the financial services industry.

“The department is also working very closely with the Robert Mathavious [Financial Services] Institute to make sure that persons within the industry get the professional qualifications on all the various aspects in the financial area industry,” she said.

Junior Minister for Trade and Economic Development Shereen Flax-Charles then asked if a “more structured” financial curriculum is being taught in secondary schools.

The CEO responded that a programme offered in partnership with the institute has been in place for a few years but that not many students had participated, according to the report.

However, BVI Finance continues to work with schools to promote the programme, she said. Ms. Donovan added that her agency put more focus on financial education during Financial Services Week, which took place in the first week of December.

Mr. Filmer said there are “not enough young men” in the industry and that he has encouraged them to pursue finance. BVI Finance, he added, operated a programme 10 years ago “where the department would recruit young men who came out of prison and hire them as messengers and office assistants to get them interested in the field.”

Deputy Premier Dr. Natalio “Sowande” Wheatley asked the BVI Finance team to predict the impact of the public ownership register scheduled to be enacted in 2023, “especially in the Asian market that values their privacy.”

Mr. Filmer replied that for the past 20 years, prognosticators have speculated that the financial industry would not survive various regulatory changes, according to the SFC report.

However, he said, after every change, “the jurisdiction and territory … continued to thrive and be successful,” the report stated.

He added that the way changes are implemented plays an important role in determining whether the jurisdiction can overcome any challenges.

Mr. Filmer said he personally has observed how industry practitioners work “with clients to hold their hands and to help them through the stages of the new legislation.”