Incorporations toppled in the second quarter, suggesting that 2022 won’t reach the heights of 2021, according to the latest quarterly report from the Financial Services Commission. Q2 2022 saw just …

END_OF_DOCUMENT_TOKEN_TO_BE_REPLACED 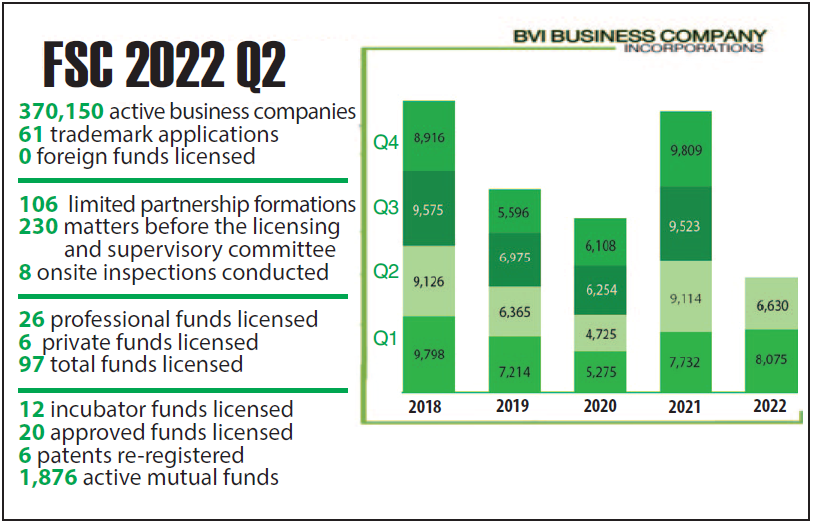 Incorporations toppled in the second quarter, suggesting that 2022 won’t reach the heights of 2021, according to the latest quarterly report from the Financial Services Commission.

Q2 2022 saw just 6,630 incorporations, giving financial services its worst quarter since Q4 of 2020, which itself was one of the worst years on record for incorporations.

The numbers dampened hopes of a continued climb from last year, when incorporations saw their best performance since 2018 as they recovered somewhat from a long-term downward trend.

Meanwhile, the number of new limited partnerships, which began in the territory in 2017, dropped slightly from the previous quarter, with 106 partnerships formed, a decrease of just six from Q1.

Cumulatively, 2,257 LPs have formed in the territory since 2017. Additionally, the total number of new applications to register a trademark in Q1 2022 decreased by 45 percent from the previous quarter, with just 61 applications filed. Q1 saw a major spike in trademark applications, with 111 filed.

Since the enactment of the Trade Marks Act in 2015, a total of 1,904 new applications to register a trademark have been filed, the FSC reported.

The number of active mutual funds fell to 832 in Q2, the lowest number since Q1 of 2021. Even with the addition of the “private investment funds” category, which has only been included in the numbers since Q3 of 2020, overall active funds have fallen by eight percent. This is largely due to a decrease in active private mutual funds, which have fallen by 15 percent in the past two years.