In 2021, new incorporations in the Virgin Islands saw their best year since 2018, recovering somewhat from a disappointing downward trend for the territory’s core financial product, according to fourth …

END_OF_DOCUMENT_TOKEN_TO_BE_REPLACED 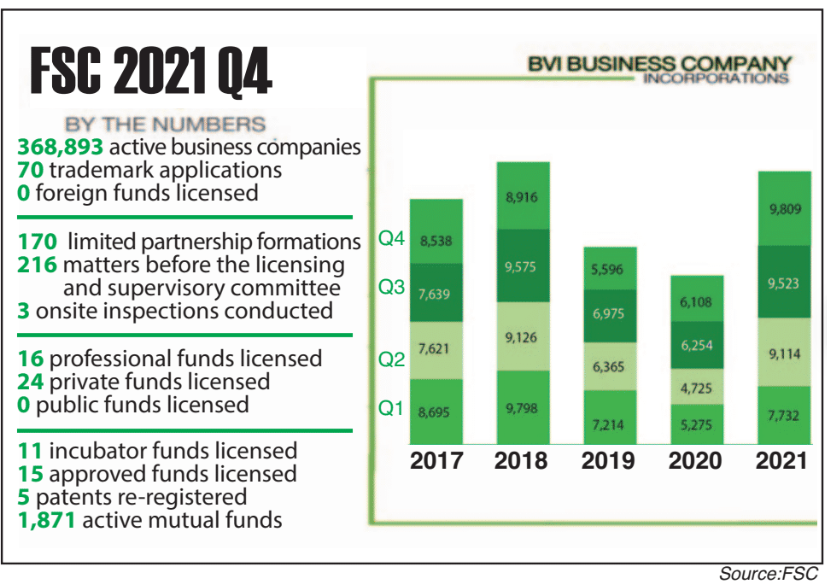 In 2021, new incorporations in the Virgin Islands saw their best year since 2018, recovering somewhat from a disappointing downward trend for the territory’s core financial product, according to fourth quarter statistics released by the Financial Services Commission.

Quarterly performance has been rising steadily all year, with Q4 2021 ending on a particularly impressive note. At 9,809, the number of new incorporations in Q4 2021 increased three percent when compared to Q3 2021, and nearly 61 percent from Q4 2020.

The news of the continued resurgence of incorporations after a disappointing record-low performance in 2020 initially was overshadowed in October by the Pandora Papers leak, which linked VI structures to foreign leaders and other wealthy and famous figures, painting many in a negative light.

But the leak didn’t appear to have any negative effect on incorporations on Q4, which encompasses statistics from October through December.

Addressing the numbers at a press conference on Friday, Premier Andrew Fahie said he plans to soon introduce more legislation to support financial services and encourage the numbers to continue to rise.

“Financial services has been strengthened over the years from government to government to government. What’s amazing is if that had gone down while I was leading, I would take the blame for it,” he said. “Because those things you can only say grace be to God for because in the middle of Covid, we are able to do that.”

The VI has announced it has begun work on a commitment to the United Kingdom requirement to establish a public register of beneficial ownership by 2023.

Addressing whether this step could harm incorporations in the future, the premier said, “In some way you’ll always be concerned, but one thing you learn is when you’ve got a lemon, make lemonade. So we’re going to continue to adjust and run between the raindrops and don’t get wet.”

Meanwhile, limited partnerships, which began in the territory thanks to new legislation in 2017, continued to stay steady compared to last quarter, with 170 partnerships formed, just one less than Q3.