In 2015, few at-large candidates had as extensive a resume as Dancia Penn, who ran as an independent in that year’s general election. The former legislator was the first deputy premier, …

END_OF_DOCUMENT_TOKEN_TO_BE_REPLACED 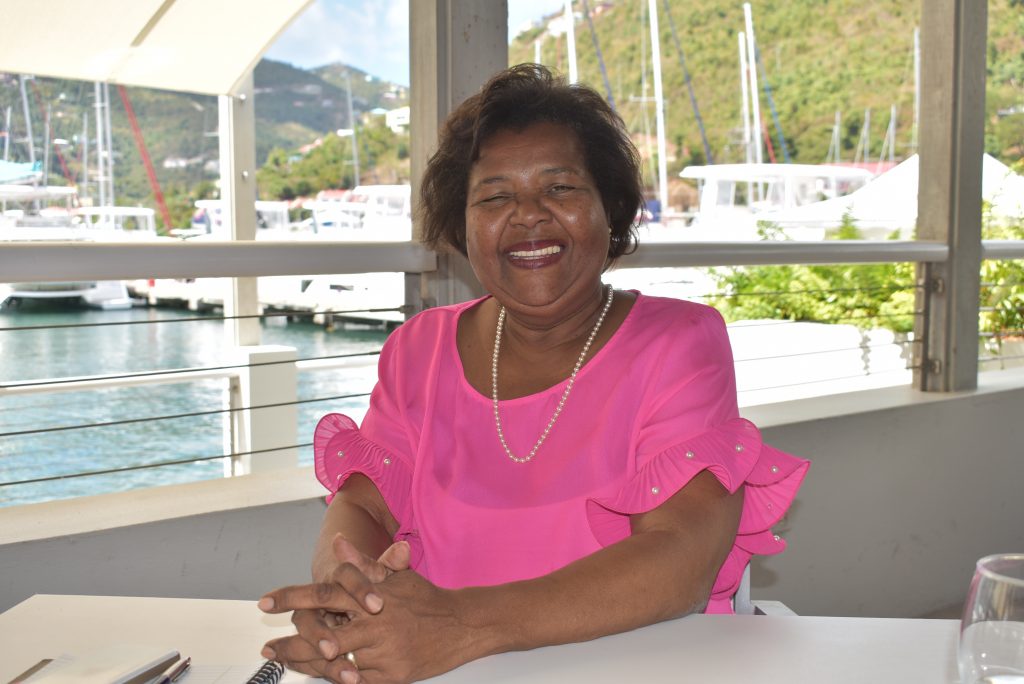 Former Deputy Premier Dancia Penn says she has the right brand of leadership to succeed as an independent at-large candidate. (Photo: CLAIRE SHEFCHIK)

In 2015, few at-large candidates had as extensive a resume as Dancia Penn, who ran as an independent in that year’s general election. The former legislator was the first deputy premier, the first Virgin Islander to serve as attorney general, and the first woman to serve as deputy governor.

When the results rolled in on election night, she made a strong showing for an independent, garnering 1,833 votes. However, in the overall scheme of things, just over five percent of the more than 36,000 at-large votes cast isn’t much, and she earned 2,822 fewer votes than the lowest earning winner, National Democratic Party candidate Archie Christian.

In fact, since the two-party system became entrenched in the late 1990s, Ms. Penn has been the only independent candidate to crack the top eight at-large spots. So why is she doing it again?

“I do not underestimate the challenge,” Ms. Penn told the Beacon last Monday, around three weeks after announcing that she would again vie for an at-large seat as an independent this year. “What I want to urge people to do is to take a fresh look and to consider where the blind loyalties to the parties have gotten us to in the past two decades.”

Ms. Penn said that with her experience and background in public service, she is in a position to serve the public “in a way not bound by any party loyalty or manifesto, but being able to really improve accountability and openness.”

“I am running as an independent and I will work with who the people elect,” she added.

In the past 20 years, only one independent candidate, longtime Second District Representative Alvin Christopher, has managed to win a seat. This time, with four parties and a crowded field, Ms. Penn — and the only other independent candidate actively campaigning, Seventh District incumbent Dr. Kedrick Pickering — think the time is right for a change.

Although independents have faced an uphill climb in recent decades, it hasn’t always been that way.

“We can’t forget our history,” Ms. Penn said. “The modern economy of this country was built on independent leaders.” These include former premiers Willard Wheatley, Cyril Romney and Ralph O’Neal, who, she pointed out,“joined the VIP well into his political career.”

“I see the crisis that this country faces at this time, and I believe that I am a person who has the skills, abilities and experience needed,” said Ms. Penn, who launched her candidacy on Feb. 2 in East End and has undertaken a meet-and-greet tour throughout the territory over the past week.

“We are dealing with a country that is in desperate need of rebuilding.”

In terms of the recovery from the 2017 hurricanes, she said she has “been very disappointed.”

“Once more we did not get our priorities right,” she added, “and I think that our government failed us.”

However, she said, the challenges the territory faces go back beyond the storms. “We’ve spent $21 million on consultancies when we don’t have a public library,” she said. “Our values have gone askew.”

Ms. Penn, who in speeches has portrayed herself as a uniter, realises that term can seem cynical to some in an era when four parties vying for power could split the vote and benefit an independent.

Such a candidate could potentially agree to join a party at the last minute and gain a prime government appointment, as Cyril Romney did in 1983 when he joined the United Party and was named chief minister. Ms. Penn said strategising is already occurring.

“People are running under party banners, but they are intending to join other people,” she said. However, she said her decision is different. “There’s nothing ulterior about it,” she explained. “An independent candidate will be able to do what our leaders of the past have done.”

Among her campaign proposals, she pledged to pass long promised consumer protection legislation. She also wants to diversify the economy through new financial services, like aircraft registers, and improve tourism by streamlining the arrival experience.

“We need to clean this country physically,” she said. “And that’s not just for tourists.It’s for us.”

Ms. Penn’s career in the legislature began in 2007, when she was elected Eighth District representative on the VIP ticket. Then, Premier Ralph O’Neal named her the first deputy premier, as well as minister of health and social development. Four years later, she lost her seat to current Health and Social Development Minister Marlon Penn, who still holds it.

However, she said, she “never had an office” in the leadership of the VIP, so she declined to speculate on mistakes the party made while in government. She did talk about her own record, including being “deeply involved” in developing the financial services sector and strengthening the social fabric.

“As [health] minister, I instituted a programme: Partnership for Peace, a conflict resolution programme,” she said. She also terminated the original building contract for Peebles Hospital, which she said helped get the project back on track.

“I was the minister that brought it to completion,” she added. “There are many things of which I’m proud.”

Meanwhile, Dr. Pickering, the current deputy premier and minister of natural resources and labour, launched his campaign for the Seventh District seat on Tuesday at The Stickett in Long Look in front of a noisy, enthusiastic crowd, telling them he ran alone because “my spirit is not in tune with the things that are going.”

Having left the NDP after the schism that led to the formation of the Progressive VI Movement, he addressed the difficulties he faced since then.

Neither PVIM nor Progressives United, the remaining parties, have announced candidates for Dr. Pickering’s Seventh District seat. That means that as of yesterday, he was only facing the NDP’s Hipolito “Diego” Penn and the VIP’s Dr. Natalio “Sowande Uhuru” Wheatley. Though maintaining his independent status, he did receive moral support at the launch from Curnal Fahie, an at-large candidate with PVIM.

“My entire team endorses him,” Mr. Fahie said. “He has endorsed us.”

Dr. Pickering, who declined to be interviewed for this article, also touted his own experience in office. He recounted his role in the Long Look Heritage Project historical site, which he said would preserve VI culture and bring visitors. Even more money would be directed to the district thanks to a harbour project in Fat Hogs Bay and a proposed floating restaurant in Brandywine Bay, he added.

“We are going to build some very wealthy people here,” he said.