The Commission of Inquiry’s first livestreamed hearing began promptly at 10 a.m. on June 2, but it went off the air about two hours later due to technical difficulties. Commissioner …

END_OF_DOCUMENT_TOKEN_TO_BE_REPLACED 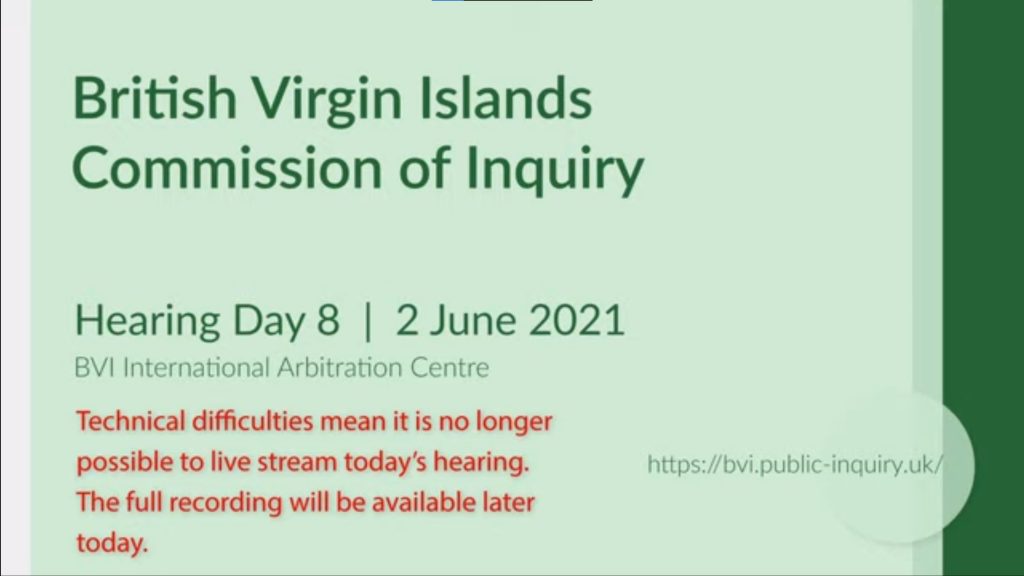 Though it ended amid technical issues, the first live-streamed Commission of Inquiry hearing began on June 2, when Commissioner Sir Gary Hickinbottom announced he is seeking an extension for the investigation deadline. (Screenshot: COI YOUTUBE)

The Commission of Inquiry’s first livestreamed hearing began promptly at 10 a.m. on June 2, but it went off the air about two hours later due to technical difficulties.

Commissioner Sir Gary Hickinbottom began the proceeding with a statement explaining plans for the next series of hearings.

Previous hearings, held in private throughout May, focused on obtaining documents the commission had previously requested from individuals and government agencies.

Sir Gary said the next series of hearings, starting June 14, will focus on specific topics: the interests of House of Assembly members; the answers to questions the COI posed to elected officials about good governance; work done by the auditor general, internal auditor, and complaints commissioner; the function of statutory boards; the purchase of Crown land; and the system for entering into government contracts.

“That is an ambitious programme — one which is, in my view, necessary to fulfil my terms of reference,” he said.

Given the breadth of subjects in need of investigation and the “sheer weight of issues,” Sir Gary said he had asked Governor John Rankin for an extension of his initial July 19 deadline to provide a final report.

The commissioner said Mr. Rankin had indicated that he was willing to grant an extension but had requested a progress report by the original July 19 deadline, at which point the governor will announce the new deadline.

Sir Gary had said when the inquiry launched in January that he had the option to request a three-month extension.

Before the June 14 hearing series starts, the only other scheduled proceeding is a hearing tomorrow about documents from the Register of Interests.

Though Wednesday’s hearing was the first to be open for public viewing, the COI called a total of 14 witnesses for private hearings last month and provided verbatim transcripts for most of the proceedings with them and several lawyers.

Concerning the outstanding transcript for Customs Commissioner Wade Smith’s hearing on May 11, Sir Gary said on Wednesday that the COI was waiting to hear back from Attorney General Dawn Smith on a specific redaction issue before posting it. It went live on June 2.

He didn’t mention the three other outstanding transcripts, from May 20 appearances by former Police Commissioner Michael Matthews and customs officials Greg Romney and Leslie Lettsome.

Mr. Haeri and Sir Gary discussed whether audio recordings and other records of Cabinet proceedings could be disclosed, or if they could be withheld when there is a concern over issues such as national security.

COI Counsel Bilal Rawat said, “We have been asking for disclosure of Cabinet minutes for months. They are only now coming through to us in a form that can be used.”

He added that Cabinet Secretary Sandra Ward also failed to indicate that audio records existed. Mr. Rawat argued that in order to assess the public interest, the commissioner needs to have some understanding of the contents of the Cabinet records. He suggested that the commissioner first examine the written records, then turn to audio recordings only if necessary.

The livestream ended around noon amid technical difficulties while Mr. Haeri and Sir Gary were still debating the Cabinet documents. An update said the full video would be available later in the day.

The commission also published several documents on June 1 setting out new protocols and rules for the rest of the investigation.

It outlined how the remaining hearings would proceed following social distancing procedures; the process for submitting written witness evidence to the COI; and when certain documents may be redacted.

Sir Gary also mentioned that the live hearings are on a three-minute delay, allowing the commission time to protect information in the moment if needed. He said the commission would continue to provide written transcripts of the hearings, even when they are held publicly.