Inquiry hearings on hold for now

After securing a six-month extension to submit the Commission of Inquiry’s report to Governor John Rankin, Commissioner Sir Gary Hickinbottom announced on July 14 that his team would pause the …

END_OF_DOCUMENT_TOKEN_TO_BE_REPLACED 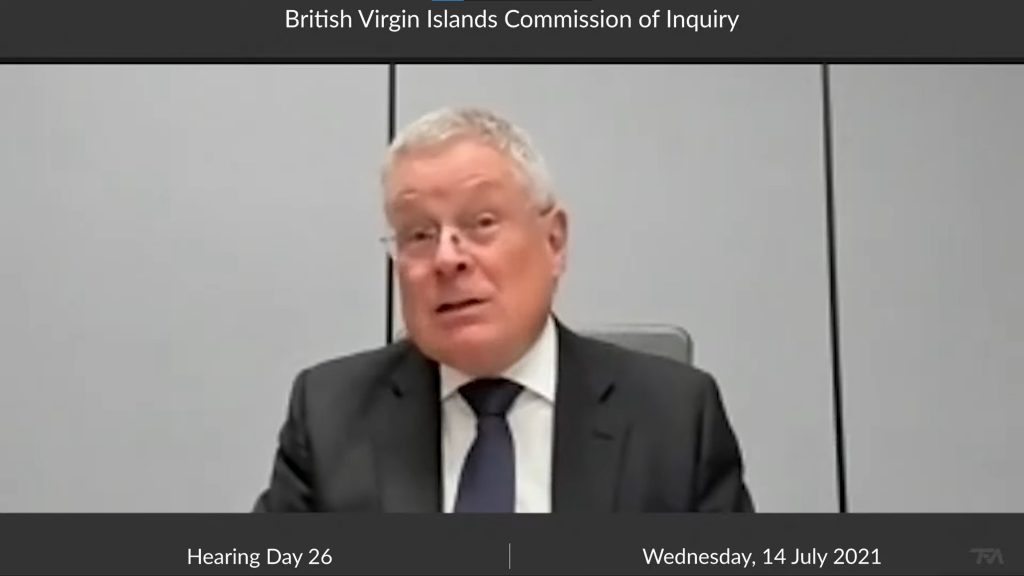 Commissioner Sir Gary Hickinbottom said the commission of inquiry team does not plan to hold public hearings in early August while witnesses may be taking vacations. He plans to resume hearings after the break, working under a new six-month extension for the COI’s final report now due Jan. 19. (Screenshot: COI/YOUTUBE)

After securing a six-month extension to submit the Commission of Inquiry’s report to Governor John Rankin, Commissioner Sir Gary Hickinbottom announced on July 14 that his team would pause the witness hearings it has been holding regularly since early May.

Sir Gary said in a press release that he had hoped to complete interviews for six main subjects before the end of July: House of Assembly members’ declared interests; position statements on good governance; work by the auditor general, internal auditor and complaints commissioner; statutory boards; Crown land sales; and government contracts.

“Despite the many challenges we have had — primarily in evidence from the BVI government being delayed — we have kept up with that timetable to date,” Sir Gary wrote.

He added that the commission has tackled the first three subjects with “very few loose ends to tie up,” and made some progress on investigating contracts.

However, he said the COI would not be able to finish holding hearings about statutory boards and Crown land in the last weeks of July as hoped.

“Requests were made for evidence from ministers some weeks ago, but, despite extensions of time in respect of each, there is a good deal outstanding,” he wrote. “Some evidence has not yet been lodged at all. Some of the evidence that has been lodged is patently incomplete.”

On July 8, the commission went head to head with Withers Senior Litigation Associate Sara-Jane Knock about the delays and the manner in which the Inquiry Response Unit has disclosed documents. Ms. Knock said the uptick in Covid-19 cases would cause further delays.

Sir Gary said in the press release that the IRU has been unable to give a confident prediction for when to expect the remaining evidence, and his team needs time to review it before scheduling more hearings.

“I reiterate that I am determined to complete this inquiry expeditiously,” he wrote. “However, given the current circumstances with regard to the evidence, it will be impossible to have focused hearings on these topics now.”

He said the COI team will continue working to obtain and analyse the evidence it needs, but members plans to return to the United Kingdom before the end of the month and return to the VI in late August. At that time, he said, hearings will pick up where they left off either in person or remotely.

Mr. Rankin announced on July 14 that he would allow a six-month extension for the COI investigation. The final report, he added, now will be due Jan. 19.

The governor said the team has been working “diligently” to probe the governance issues outlined in the original terms of reference.

“The COI is looking into a substantial amount of information,” Mr. Rankin wrote in a statement. “Sir Geoffrey Cox, on behalf of the attorney general, clearly set out the challenges the [Inquiry Response Unit] faces in providing documentation, and these issues have created delay in the progress of the COI.”

The governor highlighted the importance of ensuring the commission can operate safely within guidelines for preventing the spread of the virus.

“Good governance is paramount to the success of any country, and I remain committed to supporting both the COI and the elected government in achieving this for the British Virgin Islands,” he said.

However, an unsigned statement attributed to government ministers was published on the government website by the Premier’s Office on July 20 expressing concern about the extension.

“It is important that the COI should be a positive tool to strengthen [and] further our efforts in good governance and in the delivery of quality public services to the people of the Virgin Islands,” the statement noted. “However, ministers have been increasingly concerned by the large and growing diversion of the resources of the government to the Commission of Inquiry, and more so after the six-month extension announced by … the governor.”

Ministers called for a “clear structure and timetable for the hearings, with notice of the subject matter for those hearings set out well in advance.”

This isn’t the first time government has made such requests. Premier Andrew Fahie said after one of his hearings in May that he wished for the commission to advise subjects in advance about what questions may arise “so that they can ensure they are prepared and they walk with the correct supporting documents.”

In the statement, ministers also took issue with requests for more than 30 “lengthy” affidavits concerning government functions. They said these requests largely had to be fulfilled by public officers rather than the ministers themselves.

“Therefore, every request for affidavits and documents fully occupies the time of already busy public officers, and it has only been possible to deal with those demands by public servants working through weekends and at extraordinary hours, taking them away from their ordinary duties,” the press release states, noting that this work comes amid the pandemic.

It adds, “For the inquiry to continue with legitimacy and to manage both the limited capacity and time of public officers, it is hoped the COI will provide both a schedule for the hearings and details on the subjects and areas for investigation.”

Ministers also called for the COI to halt information requests during its upcoming break.