As new Covid-19 cases spike across the Virgin Islands and strict controls on movement are reinstated, residents have asked whether government leaders have been using a plan to guide their …

END_OF_DOCUMENT_TOKEN_TO_BE_REPLACED 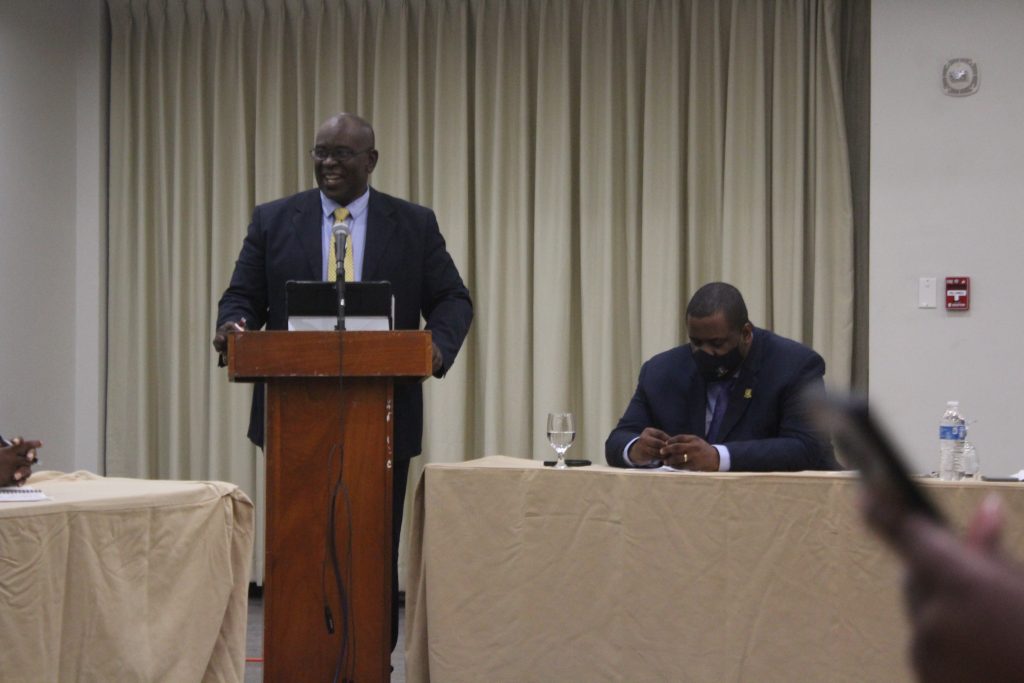 At various press conferences, Health and Social Development Minister Carvin Malone has alluded to a plan that has guided the government’s response to the coronavirus. Though government has carried out some items listed in the plan, such as mobilising a food delivery system for vulnerable residents and providing economic stimulus to fishers and farmers, they have foregone others, liking communicating consistently with the press and not rushing to close the borders. (Photo: JOEY WALDINGER)

As new Covid-19 cases spike across the Virgin Islands and strict controls on movement are reinstated, residents have asked whether government leaders have been using a plan to guide their response.

They have been. At 52 pages long, the National Action Plan Against the Covid-19 Pandemic recommends a six-phase system to respond to the virus at the territorial level.

“The purpose of this document is to outline all-of-government measures and give an indication of the roles and responsibilities of all key stakeholders that would be considered in response to the Covid-19 pandemic within the territory,” the plan’s executive summary explains.

To that end, the outlines broad steps for monitoring and potentially sealing the territory’s borders, maintaining food security, tracking the virus’s spread, and taking other actions designed to keep residents safe and informed.

However, other areas of public concern are largely missing from the plan, including specifics on how and when to reopen borders to residents and tourists; how to protect the economy during the pandemic; how to stimulate a recovery once infections are under control; and how to restrict movement within the territory.

While some aspects of the plan have been more rigorously followed, like preparing health facilities and government agencies for an outbreak, others have not, such as using a gradual system to close the borders.

At a May 14 press conference, Health and Social Development Permanent Secretary Petrona Davies said the plan serves as a general guide for the government’s response.

“It’s not a bible,” she explained.

The National Action Plan — which was provided to the Beacon in June only after this reporter made nine requests to government officials — also references at least one related pandemic plan that has not been made public despite multiple requests by this newspaper.

According to a section titled “audience,” the document “is intended for anyone involved in decision making, planning, preparation or response to the Covid-19 pandemic.”

The plan can be read in its entirety at the link below.

The plan’s six phases are dubbed “plan for it (planning and preparedness);” “keep it out (border management);” “stamp it out (cluster control);” “manage it (pandemic management),” which is the territory’s current phase; “manage it: post-peak;” and “recovery from it (recovery).”

The section for each phase identifies what government agencies would be responsible for various focus areas — such as governance, triage and patient care, and communications — and lists what tasks each should take to fulfill its duties.

The document also establishes criteria for when one stage ends and another begins.

Generally speaking, the “plan for it” phase is focused on ensuring that the government’s medical, logistical and economic facilities are ready for the pandemic, while the objective of the “keep it out” phase is to “prevent or delay the arrival of the pandemic virus” by “implementing border management controls and [preparing] for the next phases.”

As cases spiked last week, Health and Social Development Minister Carvin Malone announced that the VI had moved into the “stamp it out” phase, but on Tuesday of this week he said it had escalated further to the “manage it” phase for the first time.

Recommended actions for the current phase include a call for health officials to continuously enhance their capacity to identify new cases while carrying out “agreed-upon recommendations for isolation of all affected patients and quarantine of their contacts, as appropriate.”

According to the plan, leaders should transition from the “manage it” phase to the “recover from it” phase when the epidemiological unit indicates that waves of infection are decreasing and it is determined that “the local outbreak has reached a level where it can be managed under seasonal influenza arrangements.”

While the government has followed many aspects of the plan in recent weeks, it has missed the mark on a few others, including public communications.

Each phase calls for frequent and direct engagement with the public and the press, and most phases urge government to “respond to media requests.”

The “keep it out” phase also recommends training and making spokespeople available, while the “stamp it out” phase calls on government to “provide media with daily updates on the status of disease spread and the current response.”

Throughout the pandemic, however, reporters at the Beacon have frequently been ignored by government officials when asking for interviews or information, and updates rarely have come daily for any extended length of time.

At the outset of the pandemic in March, Premier Andrew Fahie and Mr. Malone pledged to hold weekly coronavirus press conferences, but none were held from March 24 until May 12, and they have been infrequent since then.

Along with the public, the Beacon has learned of new developments in the pandemic largely by tuning in to government’s Facebook broadcasts and sifting through press releases and graphics posted on various social media channels.

A recent press conference on Aug. 25, though, may have signaled a change: The session was more than three hours long, featuring in-depth statements from the premier and health officials and affording journalists time to ask several questions each.

Although the plan includes some broad recommendations for aiding residents who suffer financially from the pandemic’s impact, it provides few details on the topic and stops far short of outlining a comprehensive guide for repairing the economic damages.

Suggested stimulus activities during the “keep it out” phase include identifying “measures to reduce risks of illegal diversion, insecurity, inflation,” and establishing a Covid-19 Economic and Fiscal Sustainability Task Force to “submit findings to premier and Cabinet.”

Leaders have mentioned this task force in recent weeks, but they haven’t published its findings, and the BVI Chamber of Commerce and Hotel Association complained last month that its request for representation on the body was never answered.

The “stamp it out” stage includes similar economic recommendations as the phase before it, calling on the Finance Ministry to “implement measures to reduce risks, illegal diversion, insecurity, inflation,” without delving into details of what these actions might entail.

During the current “manage it” phase, the ministry is charged with implementing “interventions to support the recovery of markets, either through direct intervention or through the promotion of local traders via cash,” though again the plan does not delve into details.

Also as part of the current phase, the ministry is urged to implement an economic stimulus for farmers and fishers.

But this recommendation is already in play.

In April, leaders said that $2 million had been earmarked for fishers and farmers, though it is unclear how much, if any, has been distributed.

The plan doesn’t mention other aspects of the government’s economic stimulus, such as the $40 million grant from the Social Security Board that leaders announced in June would be used for economic incentives including an unemployment fund and business grants, both of which have struggled to succeed.

The plan makes no mention of allocating SSB funds in this manner.

As part of the recovery phase, the plan calls on the Finance Ministry to “evaluate debt relief programmes and to determine recommendations for economic stimulus.”

While the National Action Plan Against the Covid-19 Pandemic has been tailored to this crisis, at least one other plan apparently had been drafted in the past to deal with such a threat, but it hasn’t been released to the public.

Additionally, the plan describes itself as “based on the British Virgin Islands Pandemic Plan (BVIPP), which provides a framework to deal with outbreaks of infectious disease.”

It is unclear if the NPPRP and the BVIPP are the same plan.

Despite requesting both plans from health officials several times since June, the Beacon has never been furnished with a copy, though in a June 9 email MHSD acting Assistant Secretary Jocelyn Estridge explained that the BVIPP “is essentially the same plan that was updated and adapted to the Covid-19 pandemic,” apparently referring to the National Action Plan.

It is unclear if the other plans were ever officially adopted, and if so why they have never been provided to the public.