Delegates from here and the United States Virgin Islands gathered at Maria’s by the Sea Tuesday for a meeting of the Inter-Virgin Islands Council, a day of deliberations on the …

END_OF_DOCUMENT_TOKEN_TO_BE_REPLACED 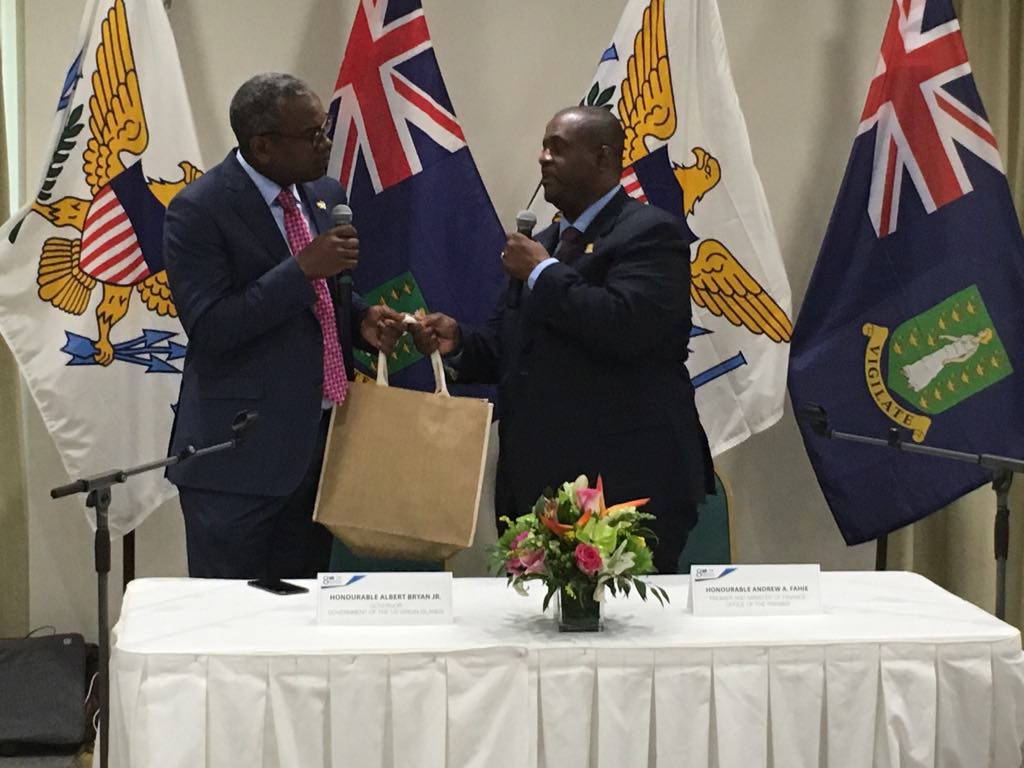 During the first Inter-Virgin Islands Council held since Hurricane Irma, leaders from this territory and the United States VI discussed the importance of kinship between the two territories in the face of a changing world and region. (Photo: JOEY WALDINGER)

Delegates from here and the United States Virgin Islands gathered at Maria’s by the Sea Tuesday for a meeting of the Inter-Virgin Islands Council, a day of deliberations on the issues pressing the two territories and the opportunities to advance their common interests.

Reporters were barred from most of the Council — the first held since the 2017 hurricanes — but during opening statements Premier Andrew Fahie and USVI Governor Albert Bryant Jr. claimed both territories have turned the recovery from the 2017 hurricanes into an opportunity to strengthen their citizens, while Mr. Fahie signaled the importance of the territories’ bond during a transitional period in the VI.

Amidst worsening hurricanes wrought by a changing climate, as well as Brexit and other global matters, it is especially important that the two territories continue to nurture a friendly and productive partnership, Mr. Fahie said.

“As we forge ahead, we will remember our shared experiences and continue to work together in pursuit of our collective higher aspirations,” he said, adding, “I am certain that our continued spirit of friendship, economic advancement and goodwill, which has served us so well in the past, will continue to guide us in the new transformation.”

Though Mr. Fahie opened the council by remarking on the VI’s progress in recovering from the devastation of the 2017 hurricanes, he emphasised that a full recovery can be achieved only if government invests in its people.

To this end, the VI is focused on diversifying its economy so as to provide for a greater breadth of job opportunities, Mr. Fahie said.

As part of the government’s push to bolster the VI’s “blue economy” — the pursuit of sustainable oceanic economic opportunities — the VI is looking to shore up its fishing sector, Mr. Fahie said.

Though he did not provide details about any initiatives related to the fishing industry, he pointed to the Marine Training Programme at H. Lavity Stoutt Community College as an example of how the territory is situating its residents to reap the benefits of a blue economy.

“Through the ‘Back to the Sea’ programme, … we are supporting a new generation of Virgin Islanders to be trained in various aspects of the marine sector,” he said.

Mr. Fahie added that the territory will soon come under audit from the International Maritime Organisation, and a favourable review is needed in order to retain its status as a Category One shipping registry.

The leaders also touched on the United Kingdom’s Friday departure from the European Union.

Britain’s separation from the bloc has cast some uncertainty on the territory, as the VI benefited significantly from the UK’s membership in the EU, Mr. Fahie said.

But one certainty, Mr. Fahie said, is that the relationship between the VI and the USVI will remain strong.

“We are certain of few things … and that our future will remain interwoven and intrinsically linked together by friendship, kinship and geography as one Virgin Islands,” Mr. Fahie said.

‘They were our people’

Walking around Huntums Ghut the night before the Council, Mr. Bryant was struck by the sensation that he could have been in either territory, he said.

Mr. Bryant seconded the premier’s assertion that the recovery from the 2017 hurricanes is achieved only by the betterment of the territory’s people.

“It’s amazing how well aligned the premier and I are, even though we don’t speak on a regular basis,” Mr. Bryant said, adding, “So when I hear him speak about the Virgin Islands, … it’s the same message, that we as a people must be strengthened by individuals.”