Inquiry > Interests bill tabled, but not passed by deadline

Interests bill tabled, but not passed by deadline

The House of Assembly missed its deadline on June 30 to pass legislation to reform the Register of Interests by making it public. However, Governor John Rankin said the next …

END_OF_DOCUMENT_TOKEN_TO_BE_REPLACED 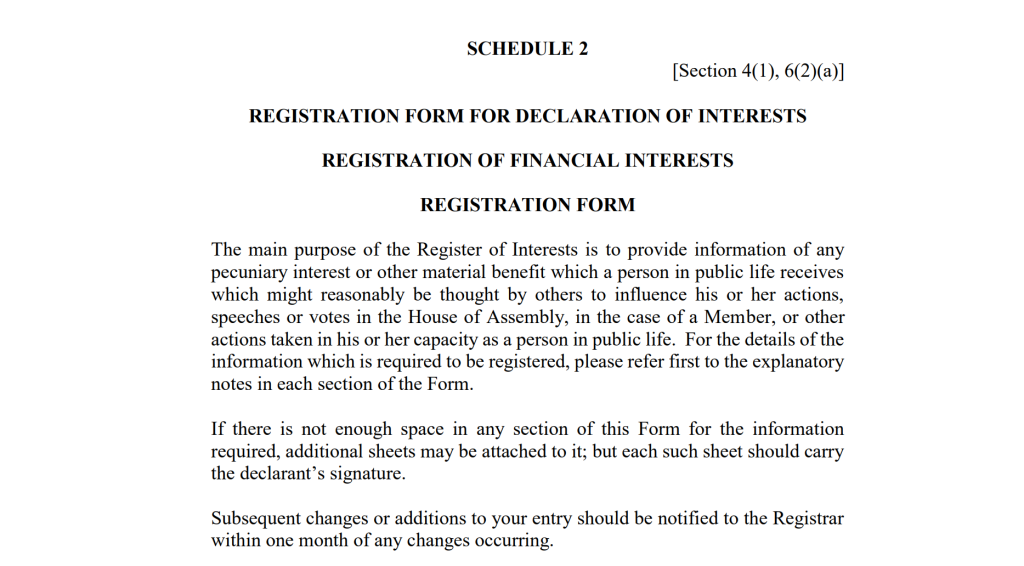 Members of the House of Assembly resumed debate on the Register of Interests Act, 2022 on July 14. (Photo: PROVIDED)

The House of Assembly missed its deadline on June 30 to pass legislation to reform the Register of Interests by making it public.

However, Governor John Rankin said the next day that he didn’t object to the HOA’s handling of the matter and didn’t consider the delay a deliberate attempt to impede work to implement the recently agreed Commission of Inquiry recommendations.

“I fully recognise the approach being taken by the government,” Mr. Rankin said. 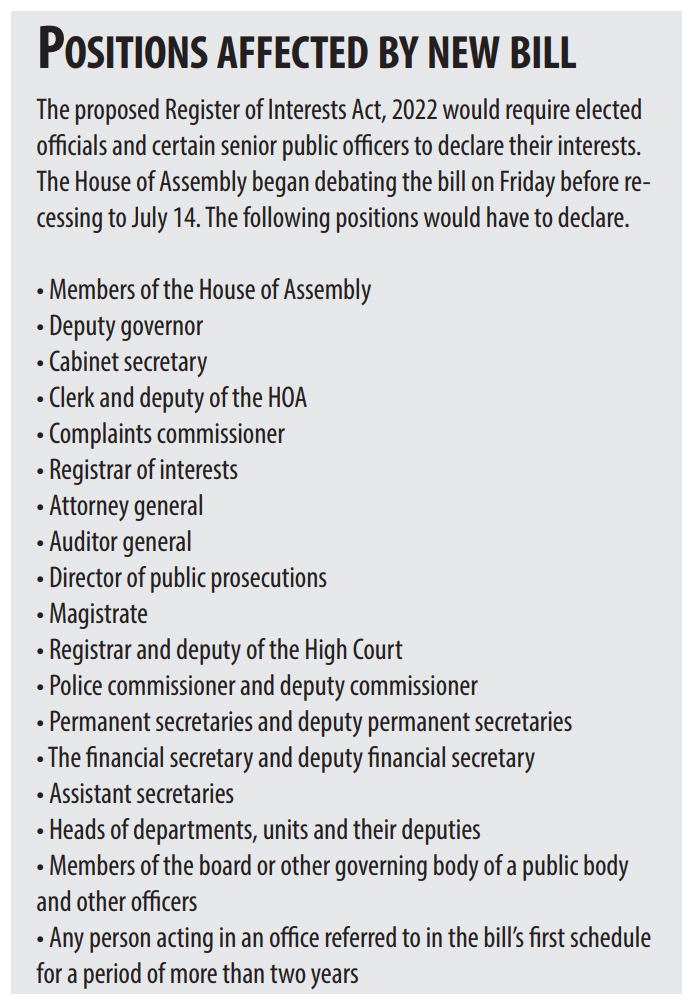 HOA members debated the Virgin Islands Register of Interests Act, 2022 on June 30 after it was introduced by Premier Dr. Natalio “Sowande” Wheatley. If the bill had passed through committee that day and been approved as planned, legislators would have met their June 30 deadline set by the COI implementation framework.

The delay came as legislators called for public consultations to discuss how the legislation could affect unelected senior members of the public service.

Dr. Wheatley said legislators will have to consider how to balance protecting privacy with requiring transparent disclosure.

“I believe very firmly that the measures we are taking will strengthen our institutions and strengthen the fabric of our society, and show confidence to the public and show those persons who are supporting us and encouraging us throughout the region and the world that we have the ability to govern ourselves and elevate our governance to a level which will make our people proud,” he said.

The Register of Interests Act, 2022 is the only legislation the House is considering in its fourth sitting. Although members only had one day to pass the bill in order to meet their deadline, they recessed until July 14 without bringing it for a vote.

Elected officials are already required to make such declarations under the existing Register of Interests Act, 2006, though the register itself is not open to the public as it would be under the new bill.

The register was meant to contain information about elected officials’ business dealings with the aim of discouraging conflicts of interests.

However, the COI found that the register never functioned as required by law.

The existing act took effect in February 2008, but the select committee of HOA members necessary for establishing the register’s format wasn’t formed until April 2016 despite repeated requests by then-Registrar of Interests Victoreen Romney-Varlack. In the years between, the registrar labelled it a “blank book.”

“Members should be thankful that the register was not a public document, because if it were, there would be nothing to inspect,” she was recorded as saying in a 2012 Standing Finance Committee meeting.

The COI report found that HOA members largely ignored Ms. Romney-Varlack’s efforts to get them to register their interests as required by law, breaching the 2006 act at least 90 times between 2011 and 2021.

Sir Gary concluded in his report that the registry remains a “blank book.”

“There has never been a system of registration of interests that has worked properly or, indeed, worked at all to the extent that, over 20 years after the introduction of the requirement of the Constitution for a register of interests, there is still not even a register,” he wrote.

The new bill seeks to address past issues with the register, in part by setting out penalties for late submissions including fines for public officers and potential suspension without pay for HOA members.

Failure to submit comes with a maximum $5,000 fine, and anyone who makes a declaration that is “fraudulent or materially misleading” faces a penalty up to a $10,000 fine and two years imprisonment on summary conviction.

“I certainly believe that these penalties will get members’ attention,” Dr. Wheatley said when introducing the bill.

The bill also empowers the registrar to seek advice from the Integrity Commission on compliance issues.

Dr. Wheatley said that after years of discussion, the register should be made public.

“Even prior to the COI process, there have been discussions and calls about strengthening good governance, accountability, transparency, and other tenants of a strong, well-functioning democracy,” he said.

He acknowledged his own failure to report his interests on time in the past and said it is important that the process is reformed to ensure everyone complies.

Government backbencher Mark Vanterpool (R-D4), however, expressed concern about how the publicity could affect non-HOA members.

Mr. Vanterpool added that he believes it is crucial to get public feedback on the bill prior to passing it considering the number of people it will affect and what it could mean to anyone considering a position in public life in the future.

He also argued that the new act shouldn’t bind current members of the House considering that they took office with the understanding they would need to comply with the 2006 act.

Dr. Wheatley said balancing privacy and transparency will be an important discussion in closed-door committee on the proposed law.

Deputy Premier Kye Rymer added that further consideration should be given to the declaration form itself in hopes of making it easier to understand.

The framework for implementing the COI reforms includes three deadlines related to the Register of Interests.

By June 30, the House was supposed to make the register public under existing arrangements; engage the Commonwealth Parliamentary Association to help design a new registry system based on international best practices, including the costs to maintain it; and amend legislation to include penalties if an HOA member doesn’t declare interests on time.

The governor said on July 1 that he had no issue with the delay in passing the proposed legislation given members’ reasoning.

He added that Cabinet members had voiced no objections to making the register public.

The governor also acknowledged that additional time may be needed to consider the bill — especially given that it requires non-HOA members to make declarations.

Mr. Rankin promised an official quarterly report in September, but said he believes that so far government leaders have made a good start on the COI reforms.