Internal auditor says that her department’s advice is often ignored

On Tuesday, Internal Audit Department Director Dorea Corea spent more than five hours before the Commission of Inquiry answering questions about her past reports and describing how her agency’s work …

END_OF_DOCUMENT_TOKEN_TO_BE_REPLACED 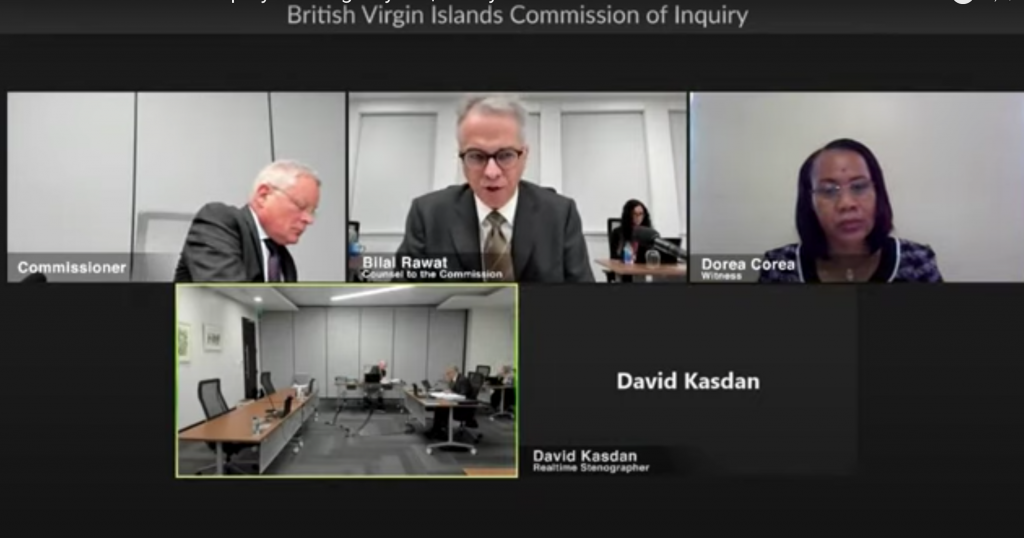 During her more than five-hour-long testimony before the Commission of Inquiry on Tuesday, Dorea Corea, director of the Internal Audit Department, detailed some of her agency’s findings. Cabinet has awarded belongership status without following the law guiding that process, and House of Assembly members have awarded money indiscriminately as part of the Assistance Grants Programme. The recommendations the department makes to correct these issues are routinely ignored, she said.

On Tuesday, Internal Audit Department Director Dorea Corea spent more than five hours before the Commission of Inquiry answering questions about her past reports and describing how her agency’s work is often obstructed, its findings often ignored.

These reports typically are not released to the public but instead go to the government agency being audited as well as the relevant minister and individuals, Ms. Corea said, adding that they are also supposed to go to an Internal Auditing Committee that has been disbanded for five years.

The department’s findings are often damning.

One 2012 audit found that barely half the people awarded belongership status between 2009 and 2011“were awarded their status within the framework of the law,” COI Counsel Bilal Rawat said while reading from a 2012 report.

Mr. Rawat also asked Ms. Corea about reports on the Assistance Grants Programme, including a 2009 report which found a disorganised system where some people received multiple disbursements from multiple government bodies — and where the guidelines established by the House of Assembly members responsible for awarding grants were rarely followed.

The auditors’ work is sometimes frustrated by noncompliant parties who refuse to handover documents when being audited, Ms. Corea added.

And when the audits are complete, her office has no power to enforce its recommendations, leaving the audited agencies to decide whether or not to make the suggested changes, she explained.

When conducting follow-up reports, Ms. Corea said, the auditors often find that little to nothing has changed, and all they can do to follow-up is make additional recommendations.

Inadequate staffing, a complaint registered by many other public officers who have testified before the COI, further complicates the department’s task, Ms. Corea said.“

It’s like a rabbit running around in a track,” she said, adding, “As much as you have completed the audit cycle — I’ve done a follow-up process — the implementation of the recommendations still are not made. So for the Internal Audit Department we find ourselves at a roadblock.”

After years of complaints about the process for becoming a belonger, the IAD in June 2012 produced a report after reviewing relevant legislation and policies; analysing a sample of people who became belongers in the prior three years; combing through Immigration Department reports and files; and interviewing immigration staff including the chairman of the Immigration Board, Ms. Corea said.

The report found that the belongership process — which involves an applicant being placed in a queue for consideration by the Board of Immigration, being interviewed and scoring above 50 percent on a cultural questionnaire, and ultimately being approved or rejected by Cabinet — was ineffective, with Cabinet having outsize and often unregulated influence over the granting of the status.

Over the course of the audit, the department found that 224 applicants were “approved” by Cabinet, even though they were not considered by the board and no board recommendations were submitted, Mr. Rawat read.

In some cases, these people did not even make a formal application before it was approved, he added.

“However, these individuals have not yet received status, as the manner in which the status was awarded is questionable and could be deemed illegal; advice is being sought from the Attorney General’s Chambers to deal with these applications,” Mr. Rawat read.

In response to a question from COI Commissioner Sir Gary Hickinbottom, Ms. Corea confirmed that Cabinet approved these 224 people even though they went “outside of the process.”

And even when actually conferring status to applicants, Cabinet appeared to stray outside the bounds of the law in many cases, according to the audit.

“The audit found that of the 77 persons to whom status was granted, only 45 of those persons were awarded status within the framework of the law,” Mr. Rawat said.

In their conclusion, the auditors lauded some aspects of the process that is in place, especially the role of the Immigration Board, which they said brought a “necessary level of control” and made it easier for Cabinet to make sound decisions on the applications.

But much of the transparency and equity the board provides is undone by Cabinet, the auditors found.

“The process used by members of Cabinet lacked both transparency and objectivity. Cabinet … unnecessarily circumvented the law, policy and process and failed to ensure that the process they use was transparent, objective, and that their decisions were based on sound advice and accurate information,” Mr. Rawat read.

Two years later, in January 2014, the IAD conducted a follow-up review of the process, which concluded that the audit’s recommendations had been almost universally ignored, Mr. Rawat said.

Of the nine recommendations, “none were fully implemented and only two had been partially implemented,” Mr. Rawat said, adding, “Is that right?”

“That is correct,” Ms. Corea responded.

Ms. Corea also answered questions about audits of the Assistance Grants Programme,whereby elected representatives are allotted tens of thousands of dollars to dole out to organisations and individuals throughout the territory, in addition to funding constituency offices, Mr. Rawat said, while reading from a May 2009 audit of the programme.

But the auditors found that guidelines meant to regulate the awarding of funds, which were developed and agreed upon by members of the House of Assembly, largely fail to do so, Mr. Rawat read.

The auditors noted that the rules are vague, often contradictory, and difficult to enforce, Mr. Rawat said.

“In a majority of cases the guidelines are not enforced as the [House] has failed to create the necessary controlled environment and activities to … manage the function effectively,” Mr. Rawat read.

As a result, “development of minor district or territorial projects” — the reason the programme was originally conceived — “accounts for less than one percent of actual disbursements from the funds,” the auditors found.

Additionally, the amount awarded often appears to be arbitrary, according to the report.

One of the guidelines that was not properly followed states that HOA members are not allowed to entertain funding requests from staff members of the Office of the Legislative Council, Mr. Rawat said.

The report states, however, that “requests were made by some staff members; these requests were honoured and cheques were made payable in their respective names,” Mr. Rawat said.

The report found that many other guidelines were not properly followed or enforced, including one that limits the amount of money legislators are allowed to give out for “district office expenses.”

At maximum, members are permitted to give out $24,000 a year for these expenses, which include rent, staff wages, and operating expenses, Mr. Rawat said.

But the audit found that some members exceeded this limit, he added.

“To be clear … did the audit find that members were going over the $24,000 in order to pay for district office expenses?,” Mr. Rawat asked Ms. Corea.

“In some regards, yes,” she responded.

Like with its report into belongership status, the department conducted a follow-up audit a year later, which found that the members had done nothing to fix the vulnerabilities outlined in the original report.

“The House of Assembly has not made significant effort to implement any of the recommendations and has not taken any corrective actions to address the issues raised in the report,” Mr. Rawat read.