On Saturday night, chef Digby Stridiron served dessert first — and then a vodka-and-cardamom cocktail. With such delectable offerings on offer, it was easy to forget that it was pouring …

END_OF_DOCUMENT_TOKEN_TO_BE_REPLACED 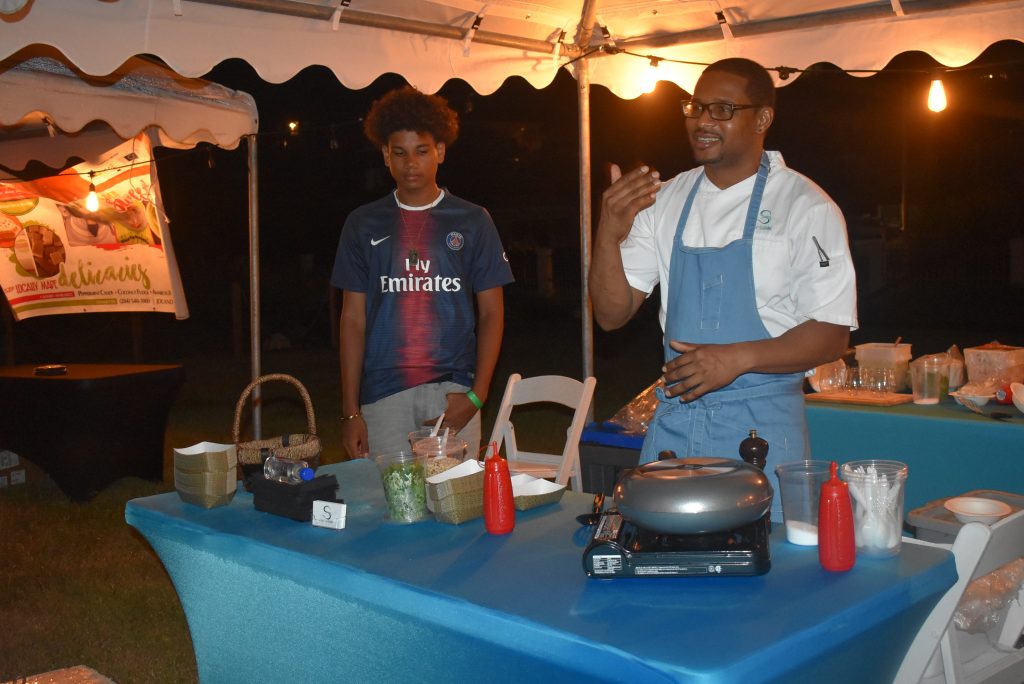 On Saturday night, chef Digby Stridiron served dessert first — and then a vodka-and-cardamom cocktail. With such delectable offerings on offer, it was easy to forget that it was pouring rain around the tent where he was bending over a steaming saute pan at the Queen Elizabeth II Park.

“This is what we eat every day in St. Croix,” the James Beard Foundation-sponsored chef said as he handed a visitor a bowl of gooey-sweet tapioca and guava, rich with the powerful aroma of cloves.

The dish may not be commonly eaten in this territory, he said, but the recipes he grew up with on St. Croix are part of the islands’ shared culinary heritage.

“I love Tortola; I’ve always had a relationship here. It’s one Virgin Islands,” he said. “There’s always been a lot of camaraderie between the islands.”
He arrived Saturday greeted by moko jumbies at the Taste of Tortola, one of the events marking BVI Food Fete, which will continue through this month.

Hurricane damage led to the cancellation of several of last year’s Food Fete events, but despite a slightly scaled- back budget, according to BVITB Event Coordinator Cindy Rosan-Jones, the event was as tasty as ever. There was a slightly smaller number of guest chefs brought in than in past years, but the ones who arrived came to impress. Mr. Stridiron, as he sauteed a piece of shrimp and tossed it into a lettuce wrap with pickled cabbage, ex- plained that this territory always had a huge influence on his cooking.

Growing up, when he visited Tortola he would divide his time between playing music and researching new recipes and new ingredients. Eventually, he migrated to New York and then to Charleston, South Carolina, winning prestigious awards along the way.

Recently he returned to his roots in St. Croix, opening a rum bar called Braata.
“It’s the hottest restaurant in the Caribbean,” he said, “and it’s in the Virgin Islands.”

Undaunted by the rain, BVITB Marketing Manager Keith Dawson dashed off to retrieve an umbrella, only to return pointing out each visiting culinary superstar.

“This is Shorne Benjamin,” he said, pointing out the globetrotting chef from St. Lucia. “He crafted his art in his mother’s kitchen, as many of us did.”

Next to him were John Mooney of Bell Book and Candle restaurant in New York, and young VI favourite Ariq Flax- Charles of Virgin Gorda, who
recently took home a top honour from the Taste of the Caribbean competition in Miami.

“Some of the chefs are not attached to a restaurant,” he said. “He just came in as a culinary exhibitioner.”
Behind the chefs worked students from the VI School of Technical Studies and Elmore Stoutt High School.

At the Road Town Wholesale tent, mixologists were stirring black-and-ginger cocktails using Mount Gay Black Barrel rum and ginger ale. Next door, the VI’s own Bombay Gin ambassador was showing off her “cosmo skills,” according to Rafael Winter, sales manager at Road Town Wholesale. As a representative of a major food distributor, he said, there was no way he could miss the fete.

“It’s a culinary event; it’s food tourism; it’s appropriate that we’re part of it,” he said, ushering in visitors to try the mixologists’ creations.

On Saturday, Mr. Stridiron was doing some mixing of his own, showing off his new “baby.”

That was Mutiny Vodka, a St. Croix spirit distilled out of breadfruit. Mr. Stridiron explained that the brand is the first-ever vodka distilled from the fruit, which was first brought to the Caribbean from Tahiti.

He poured some of the spirit straight up into a glass and offered it up, careful to keep it out of the rain.

“Not too strong, but it’s got a kick,” he explained as he poured it into a cocktail thick with cardamom spice and pineapple and garnished it with citrus. “Every drink in the Caribbean should have a lime. Even when it’s raining.”