Irma Anniversary > Businesses still at forefront of building back

Businesses still at forefront of building back

When Hurricane Irma came for the Bitter End Yacht Club, it destroyed nearly 100 buildings across 64 acres. But that didn’t mean that all of the resort was lost, said …

END_OF_DOCUMENT_TOKEN_TO_BE_REPLACED 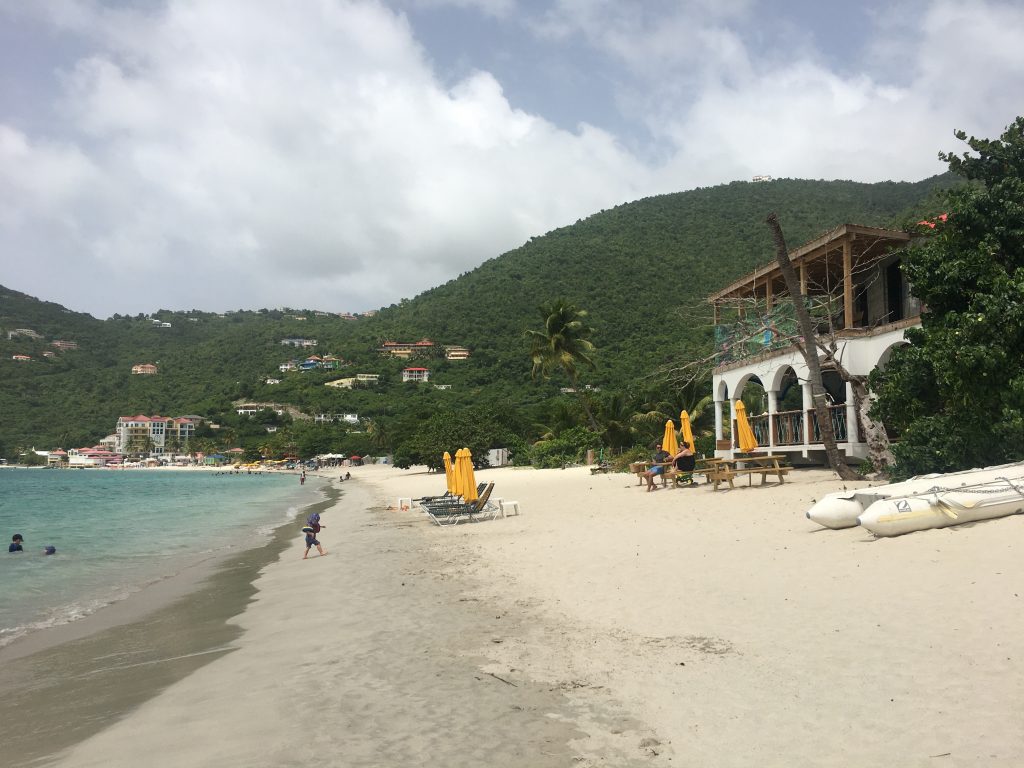 When Hurricane Irma came for the Bitter End Yacht Club, it destroyed nearly 100 buildings across 64 acres. But that didn’t mean that all of the resort was lost, said Kerri Jaffe, chief marketing officer for the 53-year-old North Sound institution.

“Bitter End was really hit by the eye and really decimated,” she said. “We knew immediately that it was going to take a while to rebuild this property.”

Over the next four years, Bitter End has never been idle, Ms. Jaffe said: Even while the territory reported thousands of pandemic-related layoffs, management found ways to keep core staff employed after the storm and during the pandemic.

“We have a construction crew on site right now that’s working, and we have actually several original veteran employees that have been working for us in different capacities,” Ms. Jaffe said. “We’ve had bartenders
turn into engineers and learn all sorts of different skills during this time because we really wanted to maintain our core Bitter End employees. And we are now in the process of hiring.” Now, Bitter End is on the cusp of opening its doors once again, with a target date sometime in November or December.

And even though a global pandemic wouldn’t seem to be the time to open or relaunch a business, the resort isn’t the only one to do so. In the fall, North Sound will also see the addition of Saba Rock Resort, which has announced a re-opening date of Oct. 16, and work has continued
at Oil Nut Bay and other properties in the area. In other parts of the territory as well, the tourism industry has continued to play a leading role in the hurricane recovery despite the formidable challenges brought by the pandemic. In recent months, resorts and other businesses have opened from Sopers Hole to East End on Tortola; from Rosewood
Little Dix Bay to North Sound on Virgin Gorda; and from Anegada to Jost Van Dyke on the smaller islands.

These boosts come amid a bleak scene: Other businesses have had to shut their doors during the pandemic, and the VI tourism industry lost nearly $280 million in revenue last year when compared to 2019
and saw a decline of more than half a million visitors, Premier
Andrew Fahie said in May, citing data from the Central Statistics Office.

Amid the turmoil, tourism leaders said their efforts at times have been thwarted by pandemic challenges, including economic devastation caused by closed borders that curtailed the 2019-2020 season and unclear reopening protocols thereafter which often were exacerbated by a perceived lack of planning on the part of government.

Keiyia Jackson-George, the executive director of the BVI Chamber of Commerce and Hotel Association, said government needs to improve on its communication in order to give businesses the support they need leading up to the next tourism season.

Even after the territory announced that it would reopen for visitors last December, industry stakeholders complained that they were hampered by an unclear plan for entry protocols. Confused would-be visitors cancelled their trips, and angry social media posts started to appear.

“I think [the pandemic response] set us back further than Irma only because you can rebuild a building,” Ms. Jackson-George said. “It takes time to rebuild a reputation.”

The chamber is currently trying to find a better way to gauge how many businesses have closed in the years since Irma.

She pointed out that 20 percent of about 50 businesses that responded to a November survey from the BVICCHA reported an “extremely negative impact” from the Covid-19 pandemic on their finances to
the point of near-closure or closure, among other findings.

On Friday, Mr. Fahie painted a clear picture of the grave consequences of the pandemic on all aspects of the economy.

“The decline of global tourism, coupled with the decisive precautionary measures implemented to mitigate the spread of the coronavirus in this territory, resulted in an obvious decline in tourism related business activity and knock-on impacts on other areas,” he said.

Efforts to bring cruise ships back to the territory sputtered to a halt after a Covid-19 spike in the VI, with ships changing itineraries that had originally included Tortola. Just one ship has brought passengers to the territory since the borders closed in spring of 2020, with no firm indication of when others might return.

Statistics from the BVI Gateway Portal, quoted by Mr. Fahie, show that between Dec. 1, when VI borders opened, and Aug. 26, just 28,000 non-residents arrived in the territory.

Although the premier called the numbers “encouraging,” they were a mere fraction of total arrivals for 2020, which saw 305,371 total visitors,
nearly all of them before the borders closed in March.

The Caribbean Tourism Organisation, in separate statistics, also reported that the VI saw a decline of 72.7 percent in overnight visitors in 2020 compared to 2019, making it one of the worst performers among the 26 CTO member destinations, all of which saw declines in 2020. Just seven destinations reported steeper overnight-visitor declines than the VI in 2020.

Meanwhile, financial services continued to be one pillar holding up the VI economy in the wake of both Irma and the pandemic.

After the storm, many firms quickly relocated their employees overseas, resulting in an almost seamless continuity of business.

However, even as it has adapted similarly to remote work amid the pandemic, the industry is facing problems of its own. With just 22,362 new companies formed, 2020 hit a 21-year low for new incorporations, according to the Financial Services Commission.

Up until the first quarter of 2021, which saw an unexpected spike, financial services has witnessed a downward slide that has seen new incorporations, total active companies and government revenue all falling.

Mr. Fahie said on Friday revenue from registrations in 2020 was $168.9 million — $26.5 million less than initially projected and 15 percent lower than 2019. The trend originated further back than either Irma or the pandemic and speaks to global threats such as blacklisting, tightening international regulations, Brexit and the United States-China trade war, according to the premier and other experts.

Ms. Jackson-George pointed out that the yachting sector played a major role in the Irma recovery because charter companies were able to
import new yachts quickly.

“In the pandemic, they were hit as badly as everyone else,” she said.
Charter Yacht Society Executive Director Janet Oliver agreed. Last year, with no income over a six-month period, some owners couldn’t carry their expenses, which include crew salaries and boatyard storage fees or the relocation of vessels for the hurricane season.
Nevertheless, even this sector is proving resilient, according to CYS Chairman Graham Gips, who said this week that although CYS membership dipped after Irma, it has increased from last year.

Now, 48 crewed yachts are registered in the territory, and many of them are fully booked for next season, he said. However, getting them, and their crews and passengers, into the territory will continue to present challenges, he said.

“Leaving and returning on a charter boat isn’t as simple as it used to be,” he said.

The lessons learned since Irma remain relevant to this day, he added.
In the intervening years, some CYS members left the VI for good. However, others have taken their place.

“Resilience has two components: the ability to withstand the devastation of, in this case, an impending storm; and the ability to recover from it,” he explained. “More of our members today head south to remove themselves from the threat of a hurricane. For those who remain, local boatyards have adjusted and improved their storage practices since their Irma experience.”

If another Irma were to hit tomorrow, he said, the number of yachts escaping catastrophic damage might be slightly higher.

“But for those members who experienced the devastation of Irma, the  emotional exhaustion of trying to climb back from a similar storm might be too much,” he added.

Ms. Jackson-George said she believes the lack of bureaucracy is the reason the private sector recovered much more quickly than the public sector after Irma, while  so much government infrastructure remains underfunded and yet to be rebuilt.

When the private sector tries to get involved, she said, its ideas are often rebuffed, such as when the BVICCHA produced a “Hi 5” guide on safe back-to-work protocols during the pandemic. Leaders shouldn’t keep rejecting such input from business,she added. In the past 18 months, the chamber has provided various recommendations, she said, some of which have since been implemented through the government’s $62.9 million stimulus package rolled out in late May 2020, including Social Security Board-funded unemployment benefits, business grants and relief from utility bills.

But many other ideas have not been implemented, she said. “A bureaucracy puts everything in a bottleneck. Guess what: Let a private entity deal with that,” she said. “I hope that the government is really, really hearing that there has to be more public and private partnerships. Government has to realise they can’t do it on their own for certain facilities.”