“Here’s a femur,” Dr. Mitch Kent said, pointing to an assortment of human remains on the beach in November. “And there’s a vertebrae; a finger bone here.” Along the shore …

END_OF_DOCUMENT_TOKEN_TO_BE_REPLACED 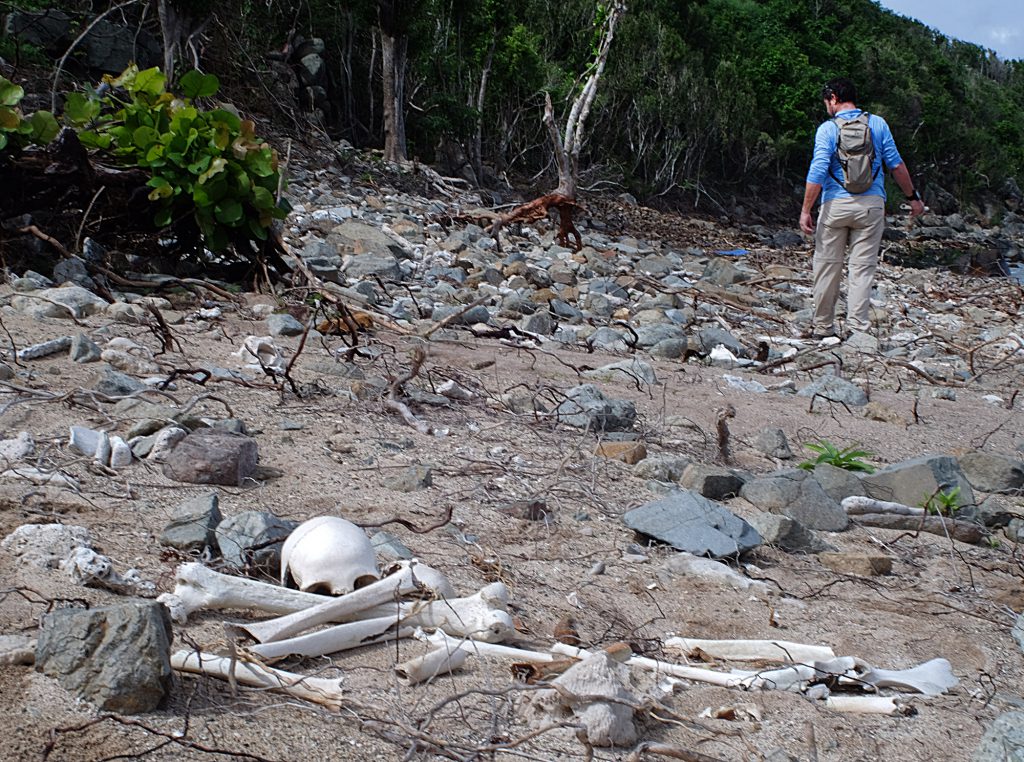 Dr. Kent suspects the remains are those of slaves from the plantation era, but that theory has not been confirmed. Photo: AMANDA ULRICH

“Here’s a femur,” Dr. Mitch Kent said, pointing to an assortment of human remains on the beach in November. “And there’s a vertebrae; a finger bone here.”

Along the shore in a remote corner of Cootens Bay — a short, jungly trek from the nearest house on the hill — more than just tree branches and coral fragments pockmarked the sand after Irma.

A sun-bleached skull, broken in half just below the eyes, was perhaps the biggest find; part of a jawbone with three teeth still intact rested not too far away.

Dr. Kent, a historian and archaeologist at the Virgin Islands Studies Institute, has become accustomed to examining sugar works ruins, old cemeteries and other historical artefacts over his long career in the territory.

But the job he was tasked to do in Cootens Bay, he admitted, was rather unprecedented — and warranted more than a small amount of delicacy.

Dozens of centuries-old bones had been lying exposed to the elements, right on the waterline of the beach, since being uncovered by the storm surge and heavy winds in September.

About two months after their initial discovery, Dr. Kent was carefully gathering the bones before they could be washed away, broken further or possibly taken.

“All of this ground here — this is a cemetery,” he said in November, walking carefully around an unmarked sandy plot a few dozen feet wide.

Dr. Kent suspects that the site in Cootens Bay is a slave cemetery, likely dating back to the plantation era.

There is no modern-day record of the cemetery and at least in recent memory, developers, visitors to the beach, and government officials have been unaware that the burial ground existed at all.

Dr. Kent said a Cootens Bay resident first alerted him to the bones in mid-October after spotting them during a walk on the beach.

As soon as he learned the site existed, Dr. Kent contacted the Governor’s Office, who in turn contacted Police Commissioner Michael Matthews. Once Mr. Matthews understood that the bones were clearly historical remains rather than a recent crime scene, Dr. Kent said, he didn’t see any need for police involvement.

The historian determined the best course of action would be to mark the location, collect the uncovered bones, and potentially arrange for their proper reburial.

The surrounding ruins in Cootens Bay — what used to be a sugar plantation, though two cannons that were discovered on the site raise eyebrows — indicate that many slaves once lived and worked in the area.

But H. Lavity Stoutt Community College President Dr. Janet Smith made clear that details about the gravesite and those buried there remain uncertain.

“The remains have not been confirmed to be those of slaves. It is also known that other persons have lived in the area over the years. Given Dr. Kent’s archaeological knowledge of slave burial grounds on Tortola, he believes the remains could be those of slaves,” she said in a written statement to the Beacon.

Though specifics about the now-unearthed burial ground have not been cemented, there are a few significant features about the site that could denote a slave cemetery.

For one, the only unusual items potentially marking the area are a small patch of lilies and a large head of coral, Dr. Kent said.

“These enslaved cemeteries would only be known to the people on the plantation. Enslaved people weren’t lavishly buried; ultimately there were no funeral markers or anything like that for them,” he said. “So lilies would be planted in those areas and just regenerate over time.”

During the plantation era, the dead were also typically buried in beachside locations because that land was deemed to be worthless agriculturally, he added. The cemetery hugging the coastline in Cane Garden Bay is one example of that practice.

“I’d imagine most of the North Shore is going to be replicated [with other burial sites], especially in the smaller bays. You know, they had to bury somewhere,” he said. “And because that land in between the beach and the fertile land area was useless, that’s essentially where they were doing it.”

Since the discovery of the bones, there has been much discussion between HLSCC and other groups about how to properly handle the remains and publicise their discovery.

The bones that have been safely taken off the beach are expected to be reinterred at some point in the future, but for now the college is awaiting further instruction from the Ministry of Education and Culture on how to move forward.

It’s an unprecedented situation for virtually everyone involved.

“Due respect for the dignity of the ancestors of the natives of the territory is a prime consideration,” Dr. Smith wrote. “The remains are therefore currently stored in a safe location and are being treated with this consideration in mind.”

Inevitably, Dr. Kent said, it’s important to remember that the site represents a final resting place that was unfortunately disturbed.

“These people had a terrible life, an absolutely appalling life, and so their only refuge, their only peace, was in death. To be disturbed like that after — it’s a shame, it’s not right,” he said. “There’s nothing you can do about it: It’s a natural event that’s created this disinterment. But at least we can try and do the right thing by them.”

This article originally appeared in the Feb. 8, 2018 print edition.