During a Nov. 9 side event at the United Nations climate change summit in Glasgow, Natural Resources, Labour and Immigration Minister Vincent Wheatley took the podium to describe how the …

END_OF_DOCUMENT_TOKEN_TO_BE_REPLACED 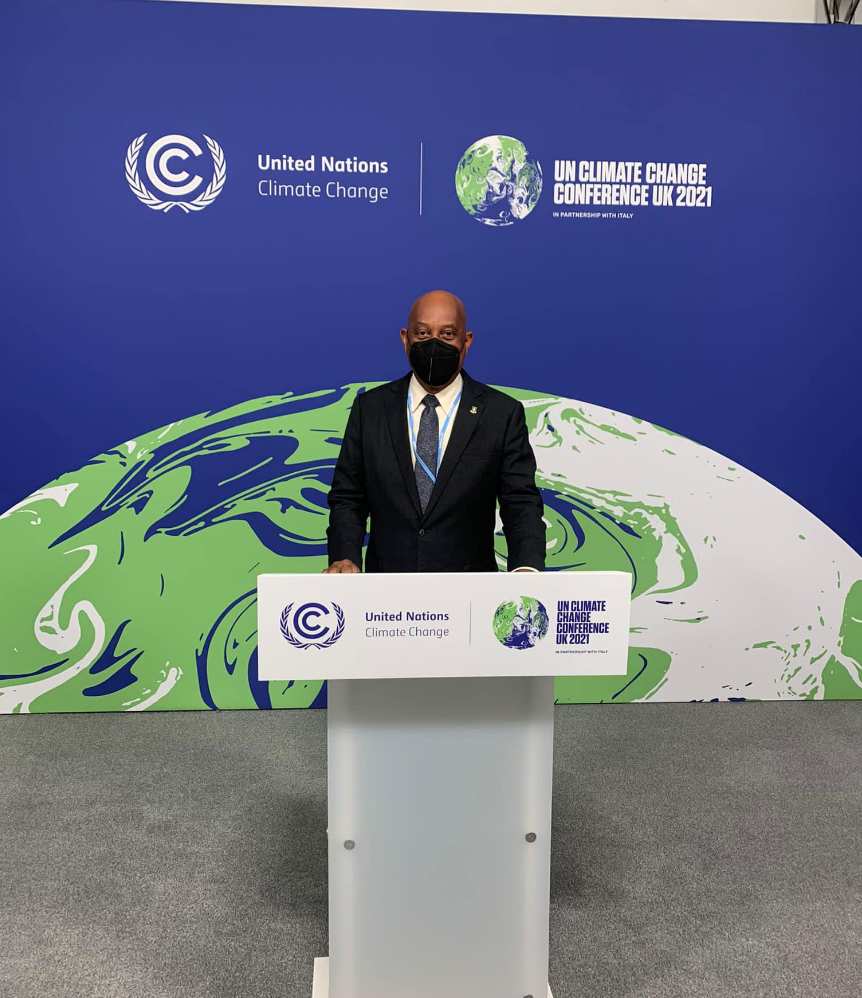 During a Nov. 9 side event at the United Nations climate change summit in Glasgow, Natural Resources, Labour and Immigration Minister Vincent Wheatley took the podium to describe how the Virgin Islands is preparing for a future that may be defined by climate catastrophe.

He pledged commitment to a newly created alliance of Caribbean and Latin American leaders; touted the Anegada Solar project as a sign of the territory’s commitment to a renewable energy transition; and said passing legislation such as revamped building codes will be crucial for climate-change adaptation.

But when representatives from nearly 200 countries signed the “Glasgow Climate Pact” four days later agreeing that they would reconvene in a year’s time with more ambitious plans to rein in emissions and mitigate warming-related damages, representatives of many small island states weren’t impressed.

“I think that there definitely could have been much stronger outcomes for small island developing states,” Janine Felson, the advisor to the Alliance of Small Island States, said during a Sunday interview on National Public Radio.

Mr. Wheatley, who was in Standing Finance Committee earlier this week, could not be reached for comment after the conference concluded, but many leaders of island nations took an even dimmer view, pointing out that their countries will bear the brunt of a warming planet despite contributing negligibly to the problem.

“For a planet in crisis, this represents a monumental failure in recognising the clear and imminent danger entire countries are now in, including my own,” Auimatagi Joe Moeono-Kolio, a Samoan who serves as Pacific senior political adviser to the Fossil Fuels Non-Proliferation Treaty Initiative, told The Guardian.

The Glasgow Climate Pact was signed after two weeks of negotiations, during which politicians aired lofty appeal for a global sea change in environmental protection and activists frequently lambasted these same politicians for failing to substantially curb their countries’ emissions.

The agreement does include some passages to which the parties had never before agreed.

For instance, for the first time in more than 25 years of UN climate talks, the pact mentions the phrase “fossil fuels,” which have been the biggest driver in the rise of global temperatures.

It also includes a section called “Loss and Damage,” which acknowledges that developing countries will be particularly hurt by climate change and calls upon developed countries to take a leading role in blunting the impact.

Yet the pact also drew criticisms for what many activists perceived as its soft language, particularly around the use of coal, the world’s dirtiest fuel, which powers some of the fastest-growing economies.

Just as negotiators were rushing to finalise the deal, representatives from India and China reportedly pressured delegates to change the text from saying countries will “phase out” coal to saying they will “phase down” coal.

Several agreements also were struck on the sidelines of the main deliberations, including one led by the United States and United Kingdom to slash the emission of methane — a gas that accounts for far fewer emissions than carbon dioxide but is more potent at trapping radiation in the atmosphere — 30 percent by 2030.

It was signed by 105 countries.

But like the Glasgow Climate Pact itself, these sideline agreements are non-binding, and some of the biggest emitters are often conspicuously absent.

Although more than 40 countries agreed on Nov. 4 to phase out coal power by 2040, the US, Australia, China and Russia were not among them.

Even the United Nations, which organises the annual Conference of the Parties, admitted that under the newly signed pact, hopes for limiting rising temperatures to 1.5 degrees Celsius above pre-industrial levels, which scientists have said is the bare minimum for a livable planet, are razor thin.

“We have kept 1.5 alive,” said Alok Sharma, chief organiser of the Glasgow conference, adding, “But the pulse of 1.5 is weak.”

While few island stakeholders appeared completely satisfied that the Glasgow pact goes far enough in averting a climate disaster, there was some consensus that it at least set humanity on the right track, and that with enough political pressure, countries might be able to limit warming at the 1.5-degree threshold.

“This package is not perfect,” tweeted Tina Stege, climate envoy to the Marshall Islands, a string of low-lying islands in the Central Pacific Ocean.

“But it is real progress and elements of [it] are a lifeline for my country.”

Broadly, the pact calls upon the signatories to return next year with more aggressive plans for achieving net-zero emissions by mid-century and for mitigating and adapting to the consequences that are already locked in.

The agreement also calls on developed countries to commit a larger amount of financing to the global renewable transitioning to support developing countries in this transition, though it leaves the ways in which rich countries can offer support up to interpretation.

Under the pact, countries are to “strengthen partnerships between developed and developing countries,” and open up a “dialogue between parties, relevant organisations, and stakeholders to discuss the arrangements for the funding … to avert, minimise and address loss and damage” associated with climate change.

While the agreement does say that developed countries should play an outsize role in contributing $100 billion annually to fight climate change, it also “notes with deep regret” that this goal — which was first set a decade ago — has not yet been met.

Many of these commitments build upon those enshrined in the 2015 Paris Agreement, which was signed to much fanfare as the first time that all countries in the world had agreed that they would take action to limit global warming.

However, the 2015 agreement also faced various criticisms, with one of the biggest being the absence of any penalties for countries that failed to meet their targets.

The Glasgow pact also does not any include any penalties for lagging countries.

The Climate Action Tracker, a scientific analysis led by two non-profits that measures governments’ climate actions against the Paris Agreement, provided an estimate of the temperature increase under various scenarios.

Under policies currently in place, the tracker stated, the atmosphere will warm to about 2.7 degrees Celsius above pre-industrial levels.

In the “optimistic” scenario, in which governments achieve their targets for hitting net-zero emissions — the US and EU are aiming for 2050; China for 2060; and India for 2070 — temperatures will rise 1.8 degrees, still higher than the goal set in Paris six years ago, according to the tracker.

From the VI, Mr. Wheatley attended the conference with the goal of securing financial commitments for climate mitigation, as funds that normally would be assured to the VI were called into question in the wake of Brexit, he previously told the Beacon.

Throughout the conference, Mr. Wheatley and other representatives from the British overseas territories participate in side events in which they shared strategies for mitigating climate effects and cutting down on emissions, while meeting with UK and EU officials to canvass them for financial support.

“It was an honour to join my voice in solidarity with the other OTs in presenting what we are doing to mitigate and adapt to climate change and to seek expertise and funding to continue this most important fight for our survival,” Mr. Wheatley wrote on Facebook on Nov. 6.

The same day, the UK Overseas Territories Association pledged to work with the British government to protect and conserve the member territories’ abundant biodiversity and natural resources.

“We, as individual territories, pledge to work with the UK government to … tackle the specific challenges climate changes poses for each of us,” the association stated, without offering details.

During a side event on Nov. 9, Mr. Wheatley and leaders from 11 other Caribbean and Latin American countries joined with parliamentarians from Spain and the UK to announce the creation of the Parliamentary Observatory on Climate Change and Just Transition.

The group is facilitated by the Economic Commission for Latin America and the Caribbean with the support of the EU through the Euroclima+Program, leaders announced.

“The purpose of the observatory is to serve as a shared information tool on the state of parliamentary procedures related to environmental initiatives and of environmental legislation in Latin America and the Caribbean, as well as to drive climate action within the realm of legislative powers and other government branches,” the leaders said in a joint statement.

Mr. Wheatley was among the speakers at the launch.

“It is imperative that we all recognize that the responsibility to preserve life on this planet now falls on everyone, no matter how big or small their society,” he said.