Almost a year and a half after Hurricane Irma, students and teachers at Ivan Dawson Primary School can now return to a new-and-improved school building in Cane Garden Bay. To …

END_OF_DOCUMENT_TOKEN_TO_BE_REPLACED 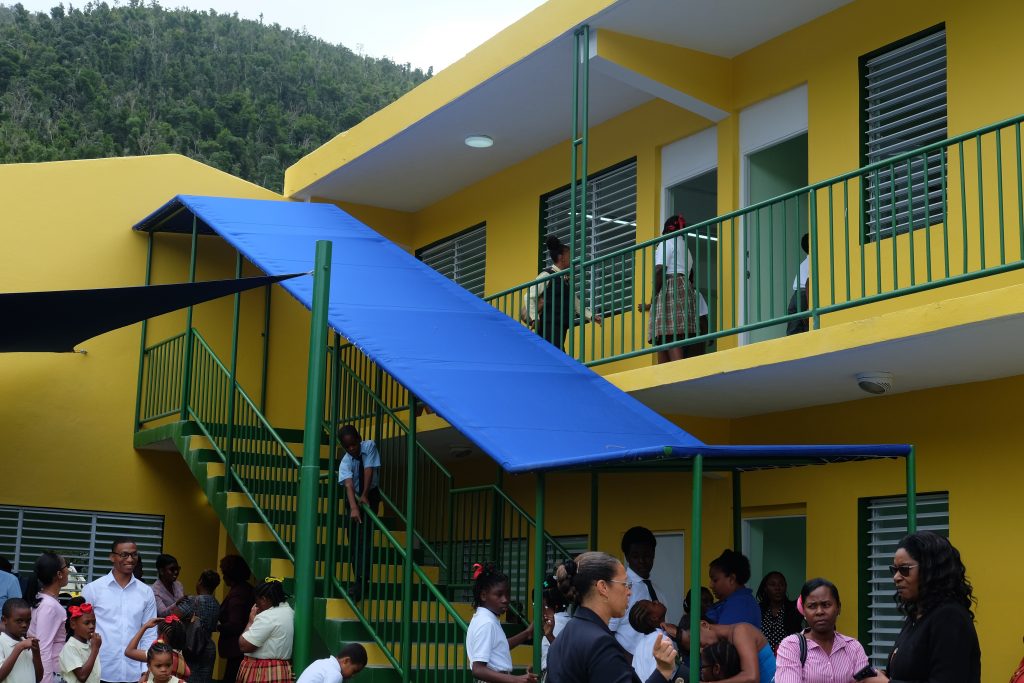 Almost a year and a half after Hurricane Irma, students and teachers at Ivan Dawson Primary School can now return to a new-and-improved school building in Cane Garden Bay.

To fund repairs for the storm-damaged facility, Norwegian Cruise Line partnered with All Hands and Hearts – Smart Response, a non-profit organisation based in the United States. A hurricane relief campaign created by Norwegian raised $2.5 million to rebuild infrastructure throughout the Caribbean, a portion of which was used to rebuild Ivan Dawson.

Education and Culture Minister Myron Walwyn was one of several politicians currently running for re-election who attended an official handover ceremony for the building last Thursday.

“People who didn’t know us, they don’t owe us anything. These people don’t owe us anything because I’m sure we have not done anything for them,” he said of Norwegian and All Hands and Hearts volunteers. “But out of the kindness of their hearts they have raised money and came
to the territory of the Virgin Islands to help us.”

“When you walk around the school, you’ll see a lot of improvements,” he said.

Since Irma, many Ivan Dawson students have attended Leonora Delville Primary School in Cappoons Bay. And while they can now return to their original school building, last week was emotional for some.

“Our students had mixed feelings from the bonds they shared for the past year and a half,” Ivan Dawson wrote in its Facebook page last Thursday. “This was their last play date. Teachers, students and even the principal [were] in tears.”

Mitch Turnbull, another political hopeful who is running for re-election in the Second District, spoke about his own experience at Ivan Dawson and aiding volunteers.

“Working with this team and the works that have been done: Students, are you pleased about your new school?” he asked the crowd of primary students and their teachers.

“Yes,” they mumbled back.

“No, no, no. Come on now. Remember: To be enthusiastic you have to act enthusiastic,” he said, repeating an Ivan Dawson mantra. “Are you pleased about your new school?”

Mr. Turnbull also gave a tribute to Ivan Dawson himself, who served as a representative for the Third and the Second district.

“When you hear of the name Ivan Dawson, you hear of integrity,” Mr. Turnbull said. “You hear of a man who was accountable to his people. … I’m grateful to the late Honourable Ivan Dawson, his family, the teachers and staff that have shaped and moulded so many students, including myself.”

During his remarks, Mr. Walwyn also touted work being done through his ministry on other damaged schools around the territory. All secondary students were back in school within two months of Hurricane Irma, he said.

“That may sound simple now looking back, but it was an enormous amount of work,” he said, giving teachers and staff in the Ministry of Education and Culture a round of applause.

Repair work is starting at Bregado Flax Educational Centre Secondary Division in Virgin Gorda, thanks to a private-public partnership with Unite BVI, he said. The secOnd portion of Bregado Flax will be handled through the $65 million Caribbean Development Bank loan, he added.

“So we should have those students back in the primary school in record time,” he said.

Elmore Stoutt High School repairs will also be covered by the CDB loan. Since Irma, students have attended classes in the former Clarence Thomas Ltd. building in Pasea.

“We expect that at least by the first month or so of the new academic school year, the L-shaped building will be ready and so students will be able to occupy that school,” Mr. Walwyn promised.