Initially expected to drop up to six inches of rain in Anegada and up to three inches elsewhere in the territory, Hurricane Jerry passed to the north of the Virgin …

END_OF_DOCUMENT_TOKEN_TO_BE_REPLACED 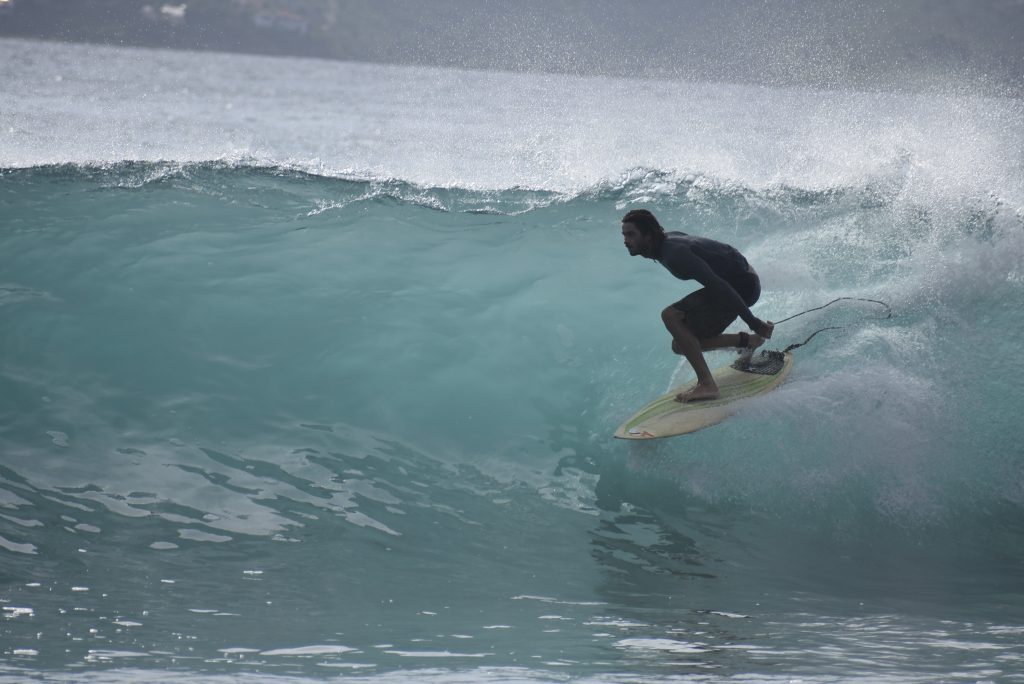 As sun broke through the clouds Friday afternoon, surfers took to the waves in Cane Garden Bay.

Initially expected to drop up to six inches of rain in Anegada and up to three inches elsewhere in the territory, Hurricane Jerry passed to the north of the Virgin Islands on Friday, leaving in its wake no significant rainfall or wind damage.

The storm did, however, cause the government to close its doors for the day, and it prompted the Department of Disaster Management to issue a high surf warning early Friday that remained in place until Sunday, by which point the Category 2 hurricane was downgraded to a tropical storm.

Later Sunday morning, the DDM issued its final update on the storm, which had travelled several hundred miles northeast of Puerto Rico and was no longer a threat to the territory.

“I thank our Lord and Saviour for giving us the opportunity in the Virgin Islands to wake up to a bright and sunny morning,” Premier Andrew Fahie said in a Saturday morning statement.

He added that despite Jerry’s passage, the Atlantic hurricane season remains a busy one, and VI residents should continue to ensure they are prepared.

“We must not let our guard down,” he said.

In preparation for the storm, government last Thursday activated the National Emergency Operations Centre at “Level One readiness,” meaning that the agencies composing the NEOC would closely monitor the storm and remain able to ramp up operations if it intensified, according to a statement from acting Governor David Archer Jr.

The same day, officials decided to close a bulk of public services in the territory. On Friday, only essential services — agencies including the police, prison, water and sewerage, fire and rescue, electricity generation and distribution, telecommunications, healthcare providers, and transportation and port services — remained open, though public officers in other sectors were encouraged to work remotely, Mr. Archer said.

He advised businesses in the private sector to take similar precautions.

“Within the public service, preparing for the possibility of a hurricane means that extra effort must be given to secure equipment, buildings and vehicles,” he said. “I urge our counterparts in the private sector to consider following our lead in this, as it is always better to be safe than to be sorry.”

Speedy’s also offered limited departures Friday due to in-clement weather. The company’s last trip ferrying customers from Virgin Gorda to Road Town left at 12:40 p.m., while the last trip from Road Town back to Virgin Gorda left at 1:30 p.m., according to a notice on the DDM’s Facebook page.

As for air travel, the territory’s airports remained open during the storm, though DDM kept a close eye on conditions, according to the agency’s Face-book page.

LIAT cancelled one flight arriving at Terrance B. Lettsome International Airport last Thursday and one leaving from the airport on Friday, but assured passengers that they would be allowed to rebook their flights by Monday.

The DDM issued a high surf warning early Friday morning, warning residents of conditions that posed dangers to everyone from the strongest swimmers to observers watching from ex-posed rocks and jetties.

Such a warning indicates that surf could be anywhere from three to 10 metres high, and as such nobody should enter the water nor linger on rocky or outlying structures near beaches, according to the agency.

“The swells are expected to cause life-threatening surfs and powerful rip currents. There is also the possibility of flooding of some low-lying coastal areas,” the DDM warned.

By Friday afternoon, however, the sun was shining and surfers were paddling into waves breaking on the eastern point of Cane Garden Bay.