Tracy Farrer Myers is worried about paying her rent and utility bills next month after being laid off from her job as a bartender at Quito’s Gazebo. One of the …

END_OF_DOCUMENT_TOKEN_TO_BE_REPLACED 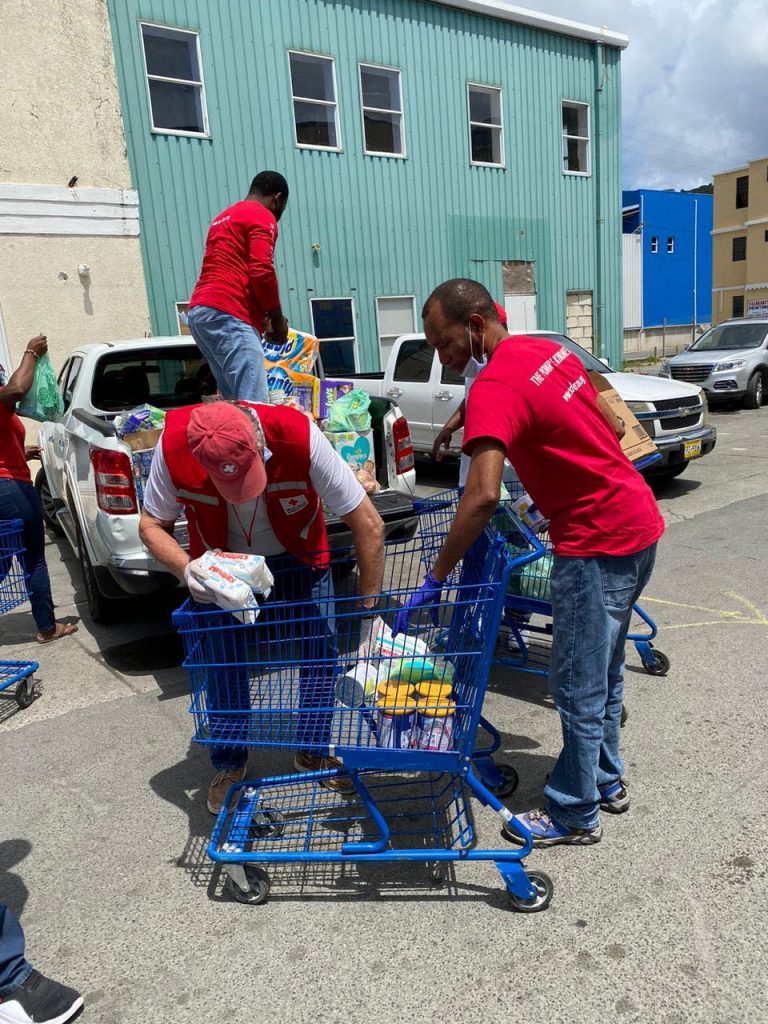 As businesses across the territory shut their doors for the lockdown, their employees are left wondering how they will eat and pay rent, while non-profit organisations like the BVI Red Cross (above) have been swamped with calls. (Photo: PROVIDED)

Tracy Farrer Myers is worried about paying her rent and utility bills next month after being laid off from her job as a bartender at Quito’s Gazebo.

One of the many residents who have found themselves suddenly unemployed as a result of the coronavirus pandemic, Ms. Myers said she is grateful to work for a business that is quick to assist employees in need and that plans to rehire laid-off workers.

But she is worried that if the lockdown continues too long, her employer’s kindness will not be enough for herself and her co-workers to survive.

“I don’t have any concerns whatsoever about my job being safe,” she said. “My concerns are how do we get through until businesses are able to open full-time again.”

She is not alone. To stop the spread of the novel coronavirus within the Virgin Islands, most of the territory’s businesses have closed their doors and tourism has halted, putting hundreds, if not thousands, of people out of work, with many struggling to buy sufficient amounts of food and anxious about how they will pay their bills.

Non-profit organisations have been working extended hours to supply food and other essentials during the lockdown, but many Facebook users have reported long wait times when calling for assistance, and the government has yet to roll out the comprehensive stimulus package that has been promised for weeks.

Officials have not provided unemployment figures since the lockdowns began, but speaking before the House of Assembly on March 27, Opposition Leader Marlon Penn made clear that unemployment had already imperiled many, who are now left wondering how they will tend to basic needs such as feeding their families.

“These are real concerns,” Mr. Penn said at the time, adding, “[People] need an inkling that support is coming to help them get through this difficult period.”

Officials in the Department of Labour and Workforce Development did not return requests for comment, and Chief Immigration Officer Ian Penn said unemployment figures are not readily available at his agency because it has been closed during the lockdowns.

For her part, Ms. Myers was able to stock up on groceries before stores closed for the current curfew and she has no concerns about going hungry during the lockdown, but she knows others who are not so lucky.

Ms. Myers also has friends and family she can lean on for support, rather than turning to some of the social services that have come under increasing strain. However, she added, reaching out to them would come with challenges as well.

“Unfortunately, if we ran out, we would need to break curfew and seek assistance at a relative’s home,” she added.

Non-profit organisations have been struggling to keep up with the growing need. Under an April 10 post on the BVI Red Cross’s Facebook page encouraging vulnerable residents to register for food supplies, several commenters noted that they were unable to make contact after calling the non-profit’s number repeatedly.

The next day, a BVIRC official responded, “Our staff and volunteers are trying our best to manage calls, WhatsApp messages, registration and deliveries. Please bear with us.”

On Monday, the eighth day of the current two-week lockdown, BVIRC Executive Director Stacy Lloyd said the organisation’s phones had been ringing constantly throughout the day with people trying to register for assistance.

In the meantime, some residents apparently have been falling through the cracks.

Police Sergeant Jackie Tom-Christopher told journalist Dean Greenaway on Monday that she had met young men at The Stickett in East End who said they had gone hungry that day.

“We need to have that communication with the police and the public,” she said, adding, “I do it not for show, but because I seen them just sitting around there. … I felt it could have been me.”

At the beginning of the first weeklong curfew, a VI businessman told Sergeant Sean McCall that he had observed similar scenes of desperation in the area, Mr. McCall told Mr. Greenaway.

Disturbed by the news that residents were eating out of garbage bins, he enlisted some business people to cook ho tmeals, which now are being distributed to needy community members.

“It’s not appropriate: They’re human beings just like everybody else,” Mr. McCall said of the report that residents had been eating out of the trash.

East End restaurateur Philip “Roti Man” Glasgow has joined in the mission, gifting rotis, as well as other specialties like chicken soup and fresh-baked cookies, to members of his community unable to buy food themselves, he told the Beacon Monday.

With the help of Education, Culture, Youth Affairs, Fisheries and Agriculture Minister Dr. Natalio Wheatley, who delivers some of Mr. Glasgow’s goods, the “Roti Man” feeds about six to eight community members a day, he said.

Coming from a family that prizes helping others, Mr. Glasgow has long supported vulnerable residents in the territory, and doesn’t intend on stopping no matter how long the lockdown wears on, he said.

“We’re here to serve until we can’t serve anymore,” he said.

East End is not the only part of the territory where residents are struggling. Yesterday, Alicia Bella, of Sea Cows Bay, heard that a neighbourhood friend who works as a mechanic was running out of food.

She tried calling the Social Development Department, the BVIRC, and the Family Support Network to replenish her friend’s supplies, but said she initially couldn’t get through to any of those organisations.

After asking on Facebook if anyone had additional numbers she could call, she reached the FSN after trying for about 15minutes, she said.

FSN had to wait until yesterday to shop, which meant that her friend would not get his food until today, Ms. Bella said. Until then, she was sharing some of her food to tide him over.

Describing how her friend sounded on the phone, Ms. Bella said, “You know when someone’s hungry or frustrated, … you can feel it.”

Besides smaller businesses, some of the territory’s largest employers have implemented large-scale layoffs.

The resort hopes to hire them all back once it reopens, but for now it has retained a skeleton crew to maintain the property and the boats anchored in the marina.

While Mainsail continues to pay every employee assisting with the resort’s upkeep, Mr. Collier did not know if they were receiving their usual wage, he said.

He added that all workers had received at least one paycheque, if not more, since the resort closed, and laid-off workers received a severance package calculated in part by how long they had worked on the property.

By keeping the resort in pristine condition, managers hope they can reopen and begin recalling staff soon, according to Mr. Collier.

“Our number-one goal is to try to get the resort opened up as soon as possible,” he said. However, even when the territory again welcomes visitors and the resort resumes operations, it is uncertain whether enough travelers will visit to require fully staffing the property, he added. While staff wait to return to work, Mainsail executives are keeping their employees in the loop via a company website that hosts videos and other updates regarding resort operations, according to Mr. Collier.

Another of the territory’s largest employers, The Moorings, has taken similar steps.

The yacht charter company has laid off “a majority” of its VI staff for at least 12 weeks — the maximum time allowed for a “temporary lay-off,” according to the government’s interpretation of the Labour Code — while retaining a team to oversee yacht maintenance and security, according to a Monday statement from Claire Skinner, an account supervisor at a public relations firm that represents the business.

The damage sustained from this economic downturn extends beyond the company’s home base in Tortola, as The Moorings has been forced to lay off sales and marketing, IT, and commercial employees as well, Ms. Skinner said.

In response to questions including how many employees are currently on the company’s payroll, whether these workers are receiving a full salary, or whether laid-off employees were given a severance package, Ms. Skinner replied, “The Moorings is unable to provide that level of insight at this time given the fluidity of the situation.”

She added, “As a company, we are having to respond to a very fluid environment, and the border closures and the curfew will determine the way we can operate and in what manner. We must await the outcome of government decisions before staffing decisions are confirmed.”