With a lockdown of Jost Van Dyke lifted after 335 residents on the island tested negative for Covid-19 and none tested positive, the territory remains under a curfew between midnight …

END_OF_DOCUMENT_TOKEN_TO_BE_REPLACED 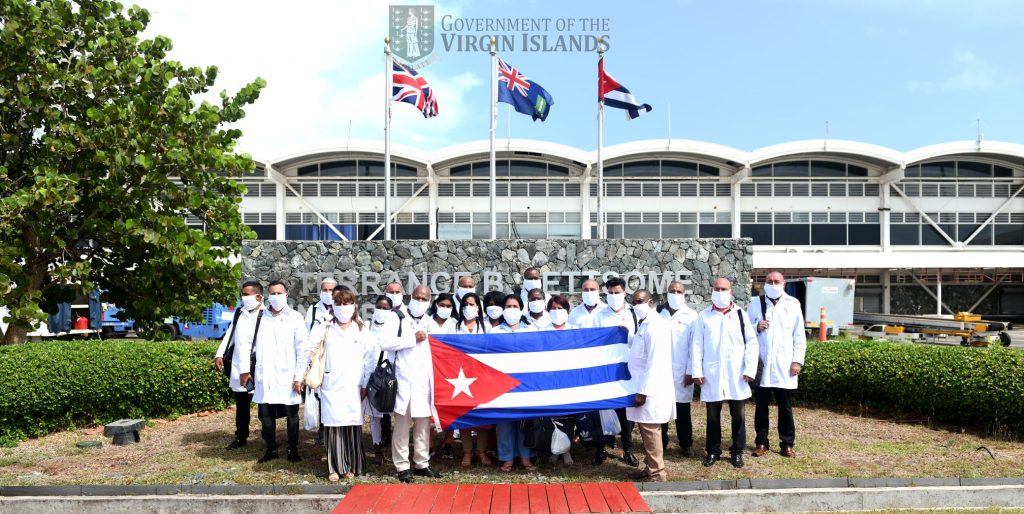 In what the government called a “historic day,” 22 medical professionals from Cuba landed in the territory on June 25. After two weeks in quarantine, they will assist the BVI Health Services Authority in its fight against the coronavirus pandemic. (Photo: GIS)

With a lockdown of Jost Van Dyke lifted after 335 residents on the island tested negative for Covid-19 and none tested positive, the territory remains under a curfew between midnight and 5 a.m. with no notice of when borders may open to work-permit holders or tourists.

Currently, only Virgin Islanders, permanent residents and people who left the territory for medical reasons are allowed to return and subsequently undergo a two-week mandatory quarantine, according to government.

However, the territory welcomed 22 medical personnel from Cuba on June 25.

“It was a historic day for the people and territory of the Virgin Islands as the team consisting of 22 medical professionals, including internist doctors, emergency response doctors, intensive care specialist and nurses, and those trained in infectious diseases [arrived],” read a recent Facebook post by the government. “The team will augment the capacity of the health care professionals currently at the BVI Health Services Authority.”

The team members’ temperatures were taken upon arrival, and they will remain in quarantine for two weeks, officials said.

On Saturday, Health and Social Development Minister Carvin Malone announced the revocation of the 24-hour curfew implemented on JVD on July 21 after a former resident reportedly tested positive in St. Vincent.

“I’m very happy to report that the BVI Health Services Authority has concluded its testing of all close contacts, the vast majority of persons residing on the island, as well as several recent visitors to Jost Van Dyke, and all test results were negative for Covid-19,” he said.

That includes 335 people on JVD, 20 on Tortola, and three on Virgin Gorda. He went on to say that no “evidence of active person-to-person transmission of the Covid-19 virus has been detected on Jost Van Dyke or throughout the Virgin Islands.”

Though Mr. Malone acknowledged criticisms of the government’s approach to addressing the situation, he said that people likely would have blamed the government if it took less stringent measures and any positive cases were detected.

“I assure you of your government’s commitment to carefully consider the serious risks posed to our small community with its unique economic and social vulnerabilities and take decisive actions to safeguard our people against this deadly disease,” he said.

He thanked the people of JVD for complying with the lockdown, also urging everyone to remain vigilant in social distancing and safe hygiene practices.

Premier Andrew Fahie also spoke, thinking those who made it possible to test the island quickly, as well as those who enforced the curfew order. He added that stricter measures to protect the territory’s sea borders will be announced in “very short order,” and that those measures will include 24-hour patrols. Mr. Fahie also said that government has spoken with the BVI Tourist Board about ways to increase tourism to JVD, marketing the island as a “gem” of the territory and promoting staycations.

So far, nine cases of Covid-19 have been confirmed in the territory, one of which resulted in death. The most recent known case was announced yesterday, and the one prior to that was announced on May 14. Seven cases have recovered since then.

According to Microsoft’s Covid-19 tracker, there are now 17,852,451 confirmed cases throughout the world. The US has 4,727,942 cases with the highest numbers occurring in California, Florida, New York, and Texas.

The United States VI has confirmed 421 cases, eight of which were fatal. Numbers have spiked in the past two months, with 11 more confirmed on Tuesday.

Globally, this territory ranks the fifth lowest in confirmed Covid-19 numbers and remains one of five Caribbean countries with no active cases.