Three days after learning that a former Jost Van Dyke resident tested positive for Covid-19 in St. Vincent and the Grenadines, government announced on Tuesday morning that JVD would be …

END_OF_DOCUMENT_TOKEN_TO_BE_REPLACED 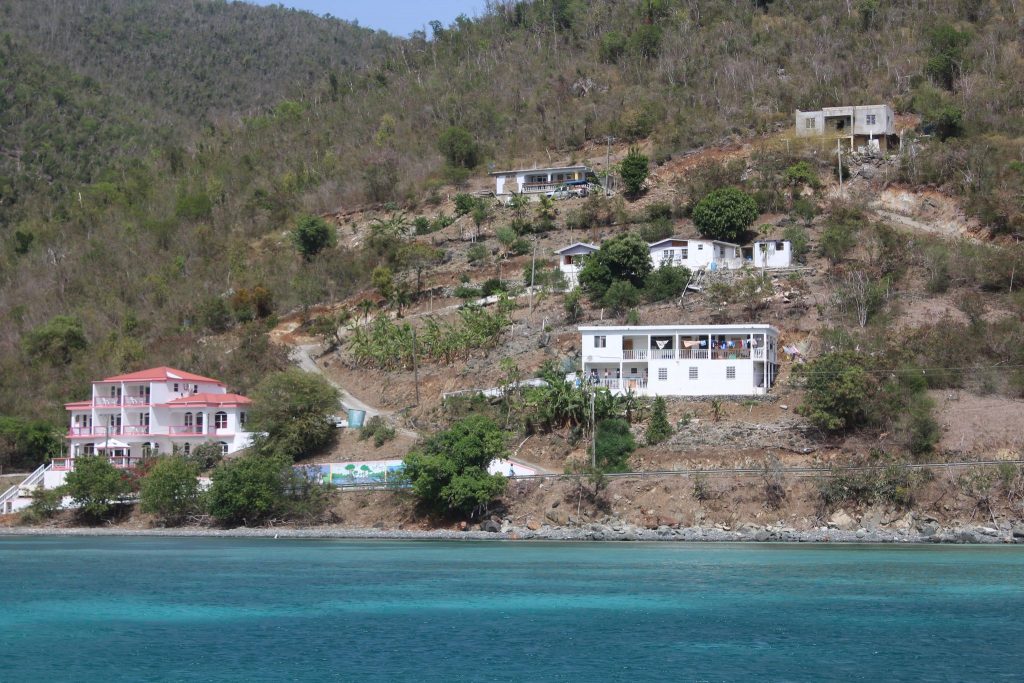 The entire island of Jost Van Dyke is under 24-hour-a-day quarantine at least until Tuesday. A traveller from the island tested positive for Covid-19 upon arriving in St. Vincent and the Grenadines on Saturday. Now government hopes to test everyone on JVD. (Photo: ZARRIN TASNIM AHMED)

Three days after learning that a former Jost Van Dyke resident tested positive for Covid-19 in St. Vincent and the Grenadines, government announced on Tuesday morning that JVD would be put under 24-hour-a-day lockdown until next Tuesday and that all of the island’s residents will be tested for the disease.

“The island itself is off limits to the rest of the territory,” Governor Gus Jaspert explained Tuesday morning. “Let me be clear: We do not believe there is a widespread outbreak on Jost Van Dyke or within the territory. What we know is that one resident from the island tested positive after leaving the [Virgin Islands].”

The announcement came after a Sunday evening broadcast by Health and Social Development Minister Carvin Malone announcing that a person travelling from this territory by airplane tested positive upon arrival at St. Vincent and the Grenadines.

He noted that the government was informed on Saturday about the positive result, and that the individual was not tested here.

“Our public health team has been deployed to actively investigate the matter by identifying the persons with whom this passenger is reported to have been in contact in order to quarantine and test close contacts who remain in the territory,” he said.

According to officials, more than 300 people will be tested in Jost Van Dyke, and a number of people on Tortola identified through contact tracing will also be tested.

“We expect to receive more test kits shortly so we can expand community testing on other islands too,” the governor added.

On Tuesday evening, Mr. Malone stated in a government talk show called Public Eye that contact tracing will expand as far as needed.

A statutory instrument was Gazetted on Tuesday morning restricting JVD residents from being on the street and confining them to their residences under mandatory quarantine.

It added that any person who visited JVD would be subjected to contact tracing and community testing, but didn’t specify a time period.

During a House of Assembly meeting Tuesday, Premier Andrew Fahie confirmed that he recently visited JVD, but refuted rumours that he came into contact with the individual who tested positive for the virus.

He said that he had already met with health officials and discussed the matter, though he did not say whether or not he had been tested. He added that 17 people on Tortola have been quarantined and tested as well.

Edgar Morris, a long-time JVD resident, said he agreed with the restriction on the island.

“Personally, the word precaution is a very strong word,” he said. “I think [the lockdown] is right. … It’s reasonable.”

With uncertainty about whether the person who tested positive in St. Vincent already had Covid-19 before leaving here, Mr. Morris said taking precautions is the best thing to do. He urged his fellow residents to comply with the restriction.

Mr. Morris is currently on Tortola with his girlfriend, but he has been placed under mandatory quarantine.

He said he was stopped by a police roadblock in Tortola on Tuesday morning and he told the police that he’s a JVD resident.

“You must commend those officers,” he said. “They said, ‘You can’t go anywhere. The government is going to place you in quarantine for seven days.’”

He had no complaints, and said he is “fully compliant.”

Colin David Aldridge took to the JVD Community Board on Facebook to express his concerns about the lockdown.

“She is in St. Vincent and [75 percent] of us have never even met her when she was here,” he wrote of the person who tested positive. “Total oppression and not many of us here on Jost have food and water for seven days either.”

Mr. Jaspert acknowledged the abrupt decision to shut down JVD and reassured residents that the government would assist in providing food and other essential supplies. He urged residents to contact their district officer for assistance.

On Tuesday, Opposition Leader Marlon Penn (R-D8) and his opposition colleagues Mitch Turnbull (R-D2) and Julian Fraser (R-D3) urged members to meet in private to address borderline “hysteria” in the community surrounding the positive case. Speaker of the House Julian Willock was hesitant to grant the request, especially seeing as the curfew order was not included in the order of the day.

Mr. Willock said he would permit the unscheduled discussion to last no longer than 20 minutes, but members remained in recess for more than three hours.
Testing

Mr. Malone said during his Sunday statement that the government’s in-house laboratory has the capacity to conduct about 3,000 tests and that the government is seeking to purchase an additional 20,000 testing kits with the assistance of Public Health England.

On Tuesday evening he added that the territory currently has 10,000 test kits, but only 3,000 are accessible and ready to be used. The others, he said, are not fully complete, but he did not specify exactly why not.

Initially, all test results gathered in the territory were sent to the Caribbean Public Health Agency in Trinidad to be confirmed. After the government obtained a PCR testing machine and built a $706,000 laboratory outfitted with $1,435,000 in contingency supplies, CARPHA deemed the in-house testing reliable, Mr. Malone said.

Therefore, test results obtained in the territory don’t haveto be sent to CARPHA anymore, and the government has“full confidence” in the process,he added.

Mr. Malone added that if hospital beds are overwhelmed in the future and the virus is spreading, the likelihood of another lockdown will increase. He pointed at other countries that have gone back into lockdown after opening up and said the government does not intend to go into lockdown without a good reason.

Dana Kampa contributed to this report