The Recovery and Development Agency signed an Oct. 28 contract worth more than $170,000 for the construction of two new temporary housing units on Jost Van Dyke, and the upgrading …

END_OF_DOCUMENT_TOKEN_TO_BE_REPLACED 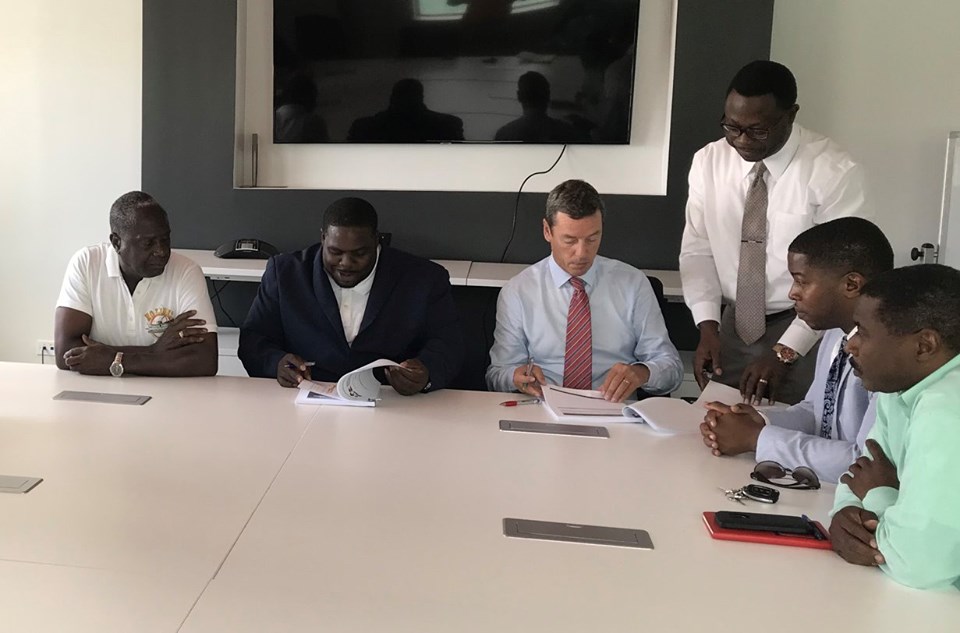 Rajah Smith (second from left), of No Limit Construction, was awarded a $171,679.90 contract to build and upgrade temporary housing on Jost Van Dyke. (Photo: RDA)

The Recovery and Development Agency signed an Oct. 28 contract worth more than $170,000 for the construction of two new temporary housing units on Jost Van Dyke, and the upgrading of the five that have already been built, said Colene Penn, RDA head of communications.

Once the project is completed, temporary housing on JVD will number seven units, all outfitted with electrical wiring, sewerage systems, and other utilities, Ms. Penn said, adding that each unit will house one occupant.

Rajah Smith of No Limit Construction was awarded the $171,679.90 contract, according to a Friday press release.

Construction is expected to commence next week and last for 16 weeks, Ms. Penn said.

She did not say how long the new structures are expected to last, but she did say that if properly built they should be able to endure extreme weather events.

No Limit Construction also recently completed works on new bathrooms at the A.O. Shirley Recreation Grounds in Road Town, handing over the keys to RDA Project Manager Aaron Mather on Oct. 25, according to an RDA press release.

As part of the contract signed in June, the company dismantled the former bathrooms, which were damaged during Hurricane Irma, and prepared ground work and ensured water and electrical services were suitable for the new facilities, Ms. Penn said.

She added that this earlier contract also called for the installation of a “soakaway” to alleviate flooding issues near the site, and the addition of features such as an access ramp for people with disabilities.

The bathrooms are constructed out of a container purchased for $84,200 from the Oregon company Contek Pro, Ms. Penn said.

Currently, No Limit is awaiting the arrival of panels that will be used for the completion of the exterior wall around the track, according to the press release.

These panels are expected to arrive in November, the press release states.

“Once they arrive,” they will be installed “and the wall will be completed,” Ms. Penn said. Meanwhile, evaluators are reviewing three tenders for the dismantling of the old incinerator at Pockwood Pond, according to a Friday press release.

The RDA will announce a contract tomorrow, at which point it will also release details regarding the project’s timeline, Ms. Penn said.

The incinerator to be removed was phased out after the arrival of a new one in 2009.

The newer one was damaged during a fire last November that rendered it inoperable, but government has said repairs should be completed soon.

Five companies submitted tenders for the removal of the old incinerator, but two were disqualified because they “did not meet the RDA’s administrative compliance requirements,” the RDA press release states.

Companies that respond to tender bids are required to submit commercial and technical paperwork separately, and they must have a current certificate of good standing from the Inland Revenue Department, Ms. Penn said.

Correction: The print version of this article incorrectly stated that representatives from No Limit Construction handed over keys to the new bathrooms at the A.O. Shirley Recreation Grounds to Aaron Mather, Recovery and Development Agency project manager.

The print version also incorrectly stated that No Limit was awaiting the arrival of panels to be used in rebuilding the exterior walls of the Recreation Grounds. A.C. Construction was the company waiting on the panels.