The toppled ficus tree in the J.R. O’Neal Botanic Gardens sits like a giant covered in moss. And yet it is still very much alive, its roots firmly planted in …

END_OF_DOCUMENT_TOKEN_TO_BE_REPLACED 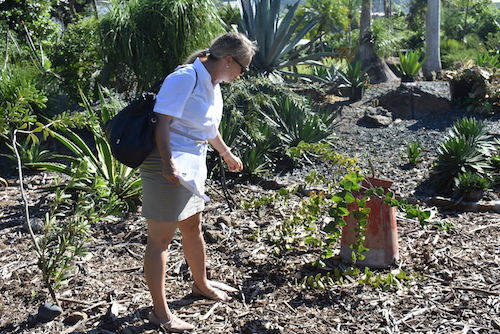 Nancy Woodfield Pascoe, deputy director of the National Parks Trust, leads a tour of the J.R. O’Neal Botanic Gardens on Friday prior to the facility’s reopening on Monday. (Photo: CLAIRE SHEFCHIK)

The toppled ficus tree in the J.R. O’Neal Botanic Gardens sits like a giant covered in moss. And yet it is still very much alive, its roots firmly planted in the ground.

It’s one of a few remaining tall trees that once canopied much of the 2.7-acre site, and it might be allowed to remain.

“We really haven’t decided what to do [with it] yet, but it is
incredible. It’s a unique interpretation of how trees grow,” said Nancy Woodfield Pascoe, deputy director of the National Parks Trust, as she led a group tour of the gardens on Friday morning.

Hurricane Irma’s brutal winds blew away some 90 percent of the foliage, according to Ms. Woodfield Pascoe, but the gardens are flourishing again in time to officially reopen on Monday.

Surviving vegetation included historically important plants like mango and calabash and rare endemic plants like Fishlock’s croton, a small furry shrub named after W.C. Fishlock, a Kew Gardens-trained botanist who worked in the VI during the early 1900s. It was important to give tourists and residents alike a chance to see these plants, she said.

“Particularly post-hurricane, there aren’t as many places for visitors to go, and [Deputy Premier Dr. Kedrick Pickering, the minister of natural resources and labour] challenged us to try and get ourselves open before the end of this year to receive visitors,” Ms. Woodfield Pascoe said, adding that people have been in- quiring about when the gardens will be available for events.

The answer, she said, is right now. Events can now be booked, and three quarters of the gardens are open on a daily basis for an admission fee of $3. Some onlookers have been shocked to learn that almost all the plants grew back on their own.

“We haven’t replanted all this,” Ms. Woodfield Pascoe said, gesturing around to the lush foliage. “It just goes again to show the resilience of plants. A lot of the trees that fell, even up at Sage Mountain, are still alive.”

Gardens restored
As Ms. Woodfield Pascoe ambled through the leafy landscape, she pointed out that not much of the orchid greenhouse remains standing. However, the lily pond is as elegant as ever, and the red-footed tortoises are back to rooting around in the soil. There’s a rebuilt fee booth, gift shop and new fencing with a dedicated car park.

Fishlock Hall, a once-popular event venue, remains a bare wooden platform with no roof or walls. Next to it, however, perches an elegant bird carved out of mahogany.

“One thing we’re considering is taking the wood from all the felled trees and having local carvers to make art,”Ms. Woodfield Pascoe said.

A makeshift tree nursery was made with donated utility poles in lieu of a more permanent structure, as the garden awaits a redesign to come later.

“The hurricane has taught us that we can be creative,” Ms. Woodfield Pascoe said. “We are still working on restoring some sections that were badly dam- aged.”

She also noted the help received from a team of arbourists from Kew Gardens in the United Kingdom who came out to prune the surviving trees, cut down the fallen ones and make the garden safe.

The restoration will be an ongoing expense.

“Just to do all the perimetre planting, the walls, we’re talking thousands and thousands of dollars,” she said.

As always, donors are needed to help rebuild and recover completely.
“We’ve done as much as we can with what we have. But it’s going to be a long-term, continuing goal to rebuild,” Ms. Woodfield Pascoe explained.

Volunteers have already played a major role in helping clear the trails at Sage Mountain and the other national parks.

“They call us up and say, ‘You know, I hike there every Monday: What can I do to help?’” Ultimately, opening the parks, including the Botanic Gardens, will be an important step toward refamiliarising both residents and visitors with the parks. And then, the NPT hopes money will flow, she said.

Free trees
On Friday, Natasha Harrigan, a terrestrial parks warden at the trust, was in the makeshift nursery, busy tending to five different species of native trees that she was preparing to give away, both to school groups and to anyone else interested in greening up their space. She said each year the parks grow 1,000 trees to give away to the public, although there are fewer this year at 134 as the NPT is giving renewed focus to the gardens.

“However, it’s still something to give away to people,” she said, adding that anyone can come to the gardens during business hours and receive a seedling while supplies last.

Gardens’ history
Friday’s centrepiece was a display on the history of the gardens, dating to their origins in the 1950s as the Agricultural Experimentation Station.

But it was Joseph Reynold “J.R.” O’Neal and his spearheading the founding of the NPT in 1961 that eventually laid the groundwork.

In 1985, Margaret Barwick, wife of then-Governor David Barwick, got together with “an avid group of volunteers” to fundraise the money to build Fishlock Hall and what she called “a rainbow garden,” according to information displayed at the event.

On Friday, both Ms. Barwick and Mr. O’Neal had trees planted in their honour, alongside avid parks enthusiasts Malcolm Winter and Ingrid Whistler and former Premier Ralph O’Neal.

Photos on display depicted visits by Queen Elizabeth II to the then-agricultural site. The display contained the actual wedding gown worn during the gardens’ first wedding in 1986, in which town planner Louis Potter, who attended the Friday ceremony, married his now-wife. Their daughter Diehdra Potter is now NPT marketing manager.

Arbour Day
Mr. O’Neal also kicked off the annual celebration for Arbour Day, when he and several others ventured to Cane Garden Bay by boat in 1953 to transport several trees to plant in honour of the coronation of the Queen. Eventually, he guided the planting of thousands of trees throughout the territory.

During the Friday ceremony, his son Michael O’Neal said, “J.R. was once asked in an interview, ‘What is your greatest desire for Arbour Day?,’ to which he responded, ‘I would like to see every schoolchild who has a bit of ground plant a cedar or mahogany tree. That would be my wish. It would transform the ap- pearance of these islands in a decade.’ I think that would still be his wish.”

Students from Joyce Samuel Primary School and Enid Scatliffe Pre-primary School were among the first groups to experience the garden, being treated to cake and juice and allowed to frolic through the central meadow.

“Schools were often some of our most frequent visitors,” Ms. Woodfield Pascoe said. “And we want them to know they can come back here again.”

After the ceremony, members of BVI Heritage Dancers led attendees out on the lawn to perform the electric slide and celebrate the joy of having the green space restored.

Ms. Woodfield Pascoe and her staff presented schoolchildren with prizes for winning the ZBVI Radio Trivia Quiz, and presented NPT staff with plaques commemorating their dedicated work restoring the parks.

‘Firm’ roots
During the ceremony, rain began to pour, prompting attendees to crowd further into the tents, but NPT acting Director Lynda Varlack, who conducted the ceremony, pointed out that it was a gift from God because it was exactly what the plants needed to keep growing.

In her remarks, NPT Chair- woman Ayana Hull said, “The garden that has such strong roots in this territory was literally knocked completely flat in 2017. Just like us, it had to struggle to get itself back to- gether. Today, it does have life and we are so happy to see the colours here.”

She pointed out that many of the original collections have regenerated and “their roots remain firm in Virgin Islands” soil, helping the remaining plants thrive.

“The botanic gardens is a Virgin Islander,” she said. “It has the DNA in it, that even when it is knocked down it knows how to get up, regenerate and survive.”

Ronald Smith-Berkeley, permanent secretary in the Ministry of Natural Resources and Labour, added, “Based on what we’re looking at now — the devastation — when I walked in this morning I was very pleased to see the rush of vegetation. … The roots of the garden remind us that we draw life, nourishment, stability and strength from the soil.”

Arliene Penn, acting executive private secretary in the Governor’s Office, filling in for the governor and deputy governor, called the gardens “splendid” and “amazing,” recalling her days as a Brownie spending hours in the gardens’ leafy refuge, and thanked the NPT, its supporters and volunteers for their work in restoring it.

“This was a getaway for us as young people and to see the display this morning, it brought a lot of gratitude,” she said. “If memories can grow, if plants can grow, then we as Virgin Islanders in this territory can achieve so much more once we work together.”