The annual Junior Ambassador of Tourism oratory competition on Tuesday crowned its 11th champion, who will represent the Virgin Islands in the Tourism Youth Congress in the Cayman Islands in …

END_OF_DOCUMENT_TOKEN_TO_BE_REPLACED 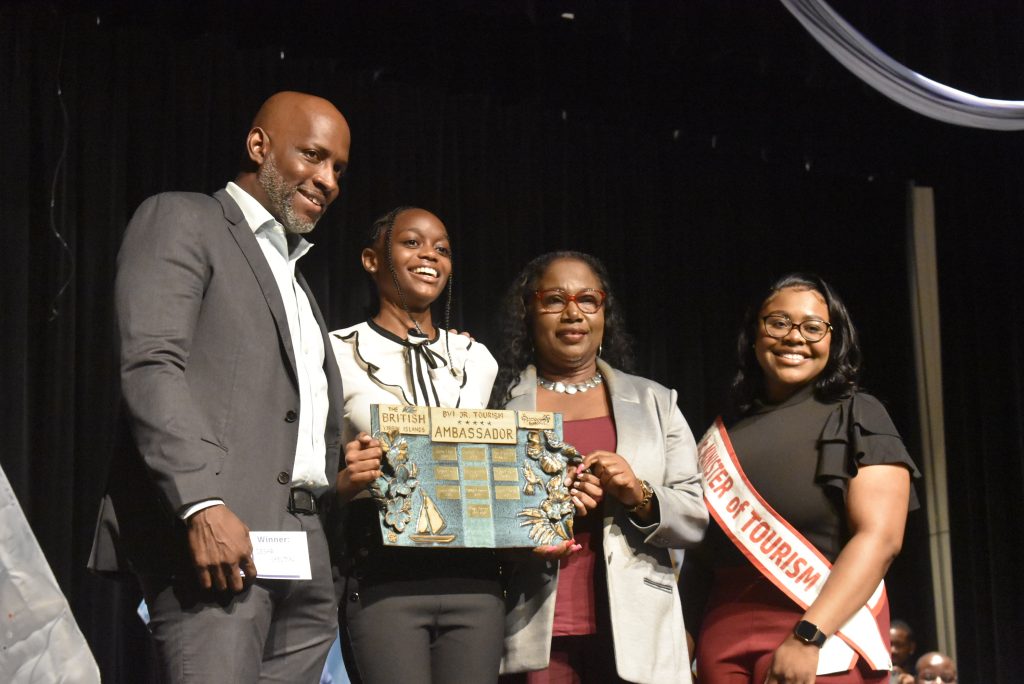 Desha Skelton holds up a trophy made by Bamboushay Pottery after being named the 2022 Junior Ambassador of Tourism on Tuesday. (Photo: ZARRIN TASNIM AHMED)

The annual Junior Ambassador of Tourism oratory competition on Tuesday crowned its 11th champion, who will represent the Virgin Islands in the Tourism Youth Congress in the Cayman Islands in September.

Desha Skelton from Elmore Stoutt High School won the honour after scoring the highest for her speeches on tourism in the territory.

In addition to the new title, Ms. Skelton won a $2,500 cash prize, a trophy from Bamboushay Pottery, and an internship at the BVI Tourist Board. She’ll also get the chance to participate in several tourism-related events during her year-long reign.

The competition was part of BVI Junior Tourism Week, which is being hosted by the BVI Tourist Board.

The week’s agenda also included a table-setting competition on Sunday at the Governor’s House, where Trishelle Dawson was named the overall winner and Deshawn DaSilva and Bey- once Moore won the Janice Nibbs Blyden Trophy for Excellence in Table Setting. The BVI Junior Chef Showdown is scheduled for 4:30 p.m. tomorrow at the Crafts Alive Village.

“John Keating says words have the ability to change the world, and this afternoon we will see a demonstration in the power of words as your representatives will show by their speeches that they are ready to transform the world,” he said.

Throughout the evening, Judges Brenda Lettsome-Tye, Adrianna Soverall, Shanika Maduro-Christopher, and Mavis Small-Abednego sat in the crowd listening to the speeches.

Mr. Gunthrop explained the rules of the competition after introducing the judges.

“Students should select one topic out of three and expound on it. The presentation should be three minutes long,” he said. “Students will not be penalised if they go over the time by 30 seconds. Students should prepare a PowerPoint presentation to go along with their speech.”

During the first round, students spoke on one of three topics: agri-tourism, experiential tourism, or community-based tourism.

For the first topic, students were asked to identify two challenges and two solutions concerning the supply of locally produced food to luxury hotels and cruise ships.

If they chose the second topic, they were asked to propose three strategies that would address the growing demand for experiential tourism.

For the last topic, students had to explain how they would use funding of $100,000 to support the most vulnerable groups in the territory.

She said two challenges to agri-tourism are water scarcity and a lack of crop diversity. She offered the solutions of installing drip systems and using hydroponic farming, adding that farm tours and farm-to-table experiences are beneficial to agri-tourism.

“Community-based tourism is giving visitors a chance to not only meet the local people of the territory, but to also invite them to experience the [VI] by participation and engagement in what we have to offer,” he said. “It is no secret that most Caribbean economies are supported by tourism, and the [VI] is no exception.”

Ms. Bishop focused her argument on the second question, but she decided not to give a typical speech. Instead, she told the story of a local farmer named Tina and the challenges that she faced.

After Ms. Bishop, Ms. Skelton gave a speech alongside her video presentation. She focused on experiential tourism and provided an itinerary filled with cultural experiences.

Mr. Foy spoke about the challenges that face the territory when it comes to agriculture. He stressed water scarcity and the lack of knowledge of sustainable agriculture among farmers. He offered solutions including training farmers and working with stakeholders to improve water supply.

Finally, Ms. Cupid spoke about experiential tourism and said that people are seeking experiences that highlight a destination’s unique offerings. Her idea was to create a virtual reality experience that takes viewers through the territory without having to leave their living rooms.

For the second round of the competition, the contestants were asked to choose between four mystery questions. They were given just one minute to craft their answers and present them to the audience.

While judges tallied scores after the second round, Mr. Gunthrop invited students from the audience to take turns speaking. Four students volunteered to speak on a surprise word given to them by Mr. Gunthrop on the spot. They were given just 30 seconds to craft their speech, and 45 seconds to deliver it.

Prizes were awarded to the volunteers, courtesy of two private businesses and two ministers.