Storm Coverage: 2017 > JVD getting by with help from its friends

JVD getting by with help from its friends

“Welcome to Jost Van Dyke,” said David “Pizza Dave” McGrath, pointing visitors in the direction of a couple of bare planks of wood on top of the sand. “That was …

END_OF_DOCUMENT_TOKEN_TO_BE_REPLACED 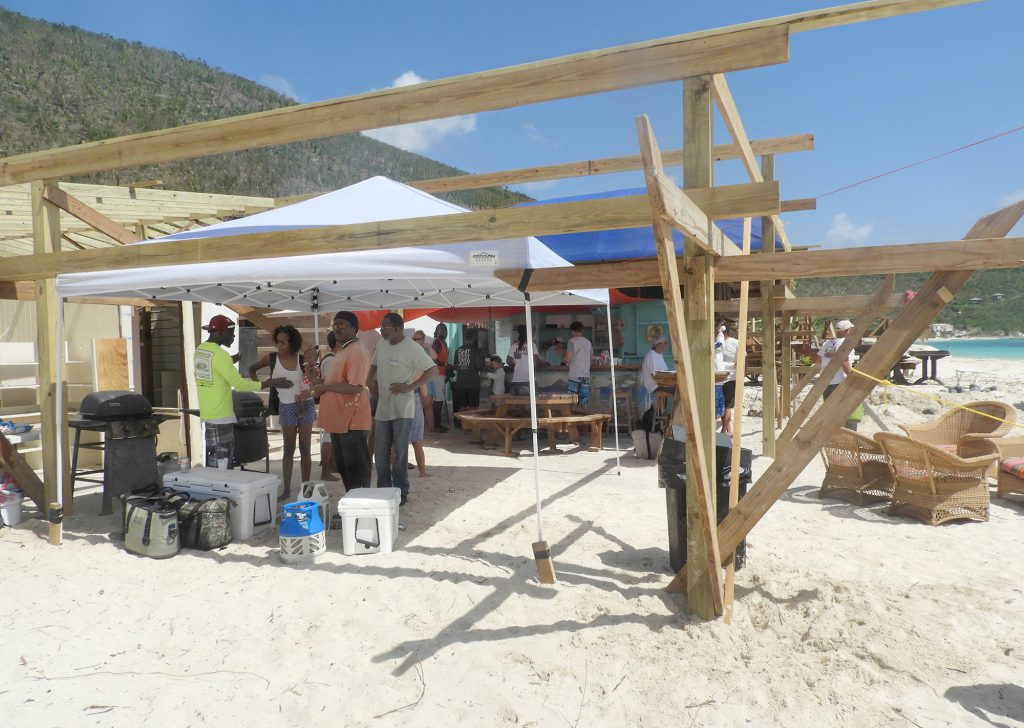 The Soggy Dollar bar was covered by a tarp during a flotilla fundraiser Sunday at White Bay on Jost Van Dyke. Photo: CLAIRE

“Welcome to Jost Van Dyke,” said David “Pizza Dave” McGrath, pointing visitors in the direction of a couple of bare planks of wood on top of the sand. “That was the ice cream shop.”

Leon Miller, a JVD photographer and bartender, tried his best to explain to a newcomer how the sister island used to be as he pointed ruefully down the beach at White Bay, a stretch formerly packed with bars and boaters. During Hurricane Irma, its lush greenery was stripped away to reveal something closer to a desert.

“On any given night,” he said, “this beach would be loaded down with boats from one end to the other. Now?”

“Uncle” Wendell Callwood used to live above his restaurant Coco Loco’s. Now he still has part of his business, but none of his home.

“It took away everything from me; everything,” he said. “My Coco Loco’s sign landed around 800 feet away in another restaurant. All my equipment — I haven’t found it yet.”

His sister, meanwhile, barely escaped with her life.

“She decided to stay by her place, Gertrude’s Beach Bar,” he said. “During the eye it got calm and then we went out and saw everything was wiped out in White Bay. So then we went searching, and we saw her stuck in a big tree: her whole head cut open, her hip broken, her foot broken.”

He said he knows who was responsible for helping her — and it wasn’t the Virgin Islands government.

“It was a helicopter [from Puerto Rico] that lifted her off the beach,” he said. “She’s doing good now; she’s in Dominican Republic. I just spoke to her on the phone.”

In the days after the storm, Foxy’s Tamarind Bar in Great Harbour served as Ground Zero during the response in part because it still had a functioning generator, turning out hot meals twice a day.

“On an island, when the ferry stops running, you realise how isolated you really are,” said Justine Callwood, daughter of Foxy’s owner Foxy Callwood. “You’re on your own.”

Mr. Miller added, “Foxy’s was the only place with a generator, so [restaurants] Hendo’s and Soggy Dollar donated their food and employees.”

Captain Tim Dabbs of BVI Adventure Tours on Tortola was on JVD within days of Irma, bringing supplies and manpower.

“The Royal Marines didn’t have a boat to get there, so they used mine,” he said.

“We knew Jost needed diesel, water and food,” Mr. Dabbs said. “The Italian shop loaded down our boats with supplies and we took a detachment of 20 Royal Marines over here.”

He was joined by a slew of captains from St. Thomas and St. John, many of whom returned to the island Sunday of this week for a flotilla to raise funds for the Soggy Dollar.

It was the first time many of them had been back, and despite the treeless beach and structures covered in tarps, Mr. Dabbs thought the island had made progress. In fact, a backhoe near the beach was clearing debris during the event.

“The beaches were covered in junk, and now they’re clear,” he said.

According to the Department of Disaster Management, homes and resorts in Great Harbour, Little Harbour and White Bay all saw extensive damage. Roughly 80 families on the island of some 300 residents were displaced and forced to stay with friends or relatives. Like the rest of the islands after Irma, JVD was left without electricity, running water and communications from the outside world.

Ms. Callwood said the “Puerto Rican Navy” — a term for a loose organisation of boaters who frequent the Virgin Islands — was among the first to arrive with aid, thanks in part to Susan Zaluski, director of the Jost Van Dykes Preservation Society. Ms. Zaluski was in St. Vincent when Irma hit and flew to Puerto Rico soon after to help coordinate aid.

The “navy” arrived the Sunday after Irma hit with eight containers full of food, water, clothing, medical supplies and building materials. Most of the items came from a checklist provided by DDM, a volunteer told the Beacon shortly after Irma.

However, less than two weeks later, Hurricane Maria presented Puerto Rico with its own large-scale disaster to clean up, and those who depended on aid from the neighbouring island were left to fend for themselves again.

“The Puerto Ricans did everything,” Mr. Callwood said. “God bless them; I feel so bad for them after Maria hit.”

Though the Puerto Ricans had to step out, the private sector also was lending a hand. United States country singer Kenny Chesney owns property in nearby St. John and visited JVD often, even mentioning the island in one of his songs. Immediately after Irma, he launched his Love for Love City Foundation and has been collecting donations from fans.

Mr. McGrath, owner of Corsair’s in Great Harbour, was in Colorado during Irma but returned a month ago. He hopes to open by December, but said there are few options for businesses right now. There were only two grocery stores on JVD to begin with: Rudy’s Marketplace and JVD Grocery. One is closed; one has very limited inventory.

“How can we open?” he asked. “There’s no electricity and no ice.”

Ferry services have resumed thanks to New Horizon Ferry Service, which is operating with a new ferry purchased before Irma. The clinic has also reopened and several businesses now have generators, but most of the goods for the Sunday fundraiser were brought over from Tortola.

“We also have a barge going Tuesdays and Thursdays, so people are able to do their shopping on Tortola,” Mr. Miller said.

Ms. Callwood added, “However, many residents still don’t have generators, so cooking a hot meal is a challenge for them.”

And as for the government?

Mr. Callwood joked, “I didn’t even know we had a government.”

Other JVD residents also said they felt neglected by the government, although the Department of Disaster Management and other public agencies have been instrumental in the island’s relief effort and officials including District Two Representative Mitch Turnbull, Governor Gus Jaspert and Premier Dr. Orlando Smith have visited the island multiple times since the storm. Dr. Smith, in fact, traveled there with the flotilla on Sunday.

“Yesterday I had a chance to visit Jost Van Dyke to see some of the rebuild efforts taking place, and spend some time with my good friend Foxy,” Dr. Smith posted on his Facebook page on Monday. “Foxy has started to rebuild. Definitely not out!”

Still, the official response has faced challenges. Mr. Turnbull told the Beacon last month that since the Public Works Department did not have any heavy equipment on the island, JVD had to rely on two privately owned excavators for cleanup, though he was working on getting additional machines shipped over.

Ms. Zaluski has been helping support an effort to get a skid steer, but is tempted to leave it up to the government for fear of making the situation worse.

“People are stepping on each other’s toes,” she said. “Nobody’s communicating; nobody knows what anybody else is doing.”

Mr. Callwood said he would give himself until February to get his restaurant back in working order.

Like many businesses around the territory, he has a GoFundMe account set up to help bring in donations.

“Last week, the government told me they were shipping in five tons of food and water,” she said. “I went to the port and looked for it, but didn’t see anything like that. I went back to DDM, and nobody seemed to know where it went.”

Kelly Tracy, a mother and part-time restaurant employee, has had her livelihood threatened by the hurricane.

“Everything is slow here,” she said, pointing out that the island often lacked running water even before the storm. “Irma just made it slower.”

Even now, she feels JVD is being neglected. For example, the territory’s early childhood programmes for children ages 3 to 8 were implemented with the help of tents donated by UNICEF — but not on JVD.

“Virgin Gorda has one, Anegada has one,” she said. “We don’t have one.”

She and her husband have young children, and around half of their would-be classmates have left the island.

“This is no place for kids,” she added.

This is not the first time that some of the sister island’s residents have felt overlooked.

“Jost Van Dyke is left out of a lot of things,” Ms. Callwood said, “even though we make the VI a lot of money.”

Originally, according to a statement from Education and Culture Minister Myron Walwyn, JVD primary school students were to have attended the Ivan Dawson Primary School on Tortola, but residents said they would prefer to keep using the damaged local school along with the library building.

“During Maria, the school was supposed to be the hurricane shelter,” Ms. Zaluski said. “I posted a picture of it: This school with no windows or roof — this is the shelter you’re telling people to go to?”

The school is also in a flood zone, and there’s been a pool full of standing water behind it ever since Irma, which she said is “mosquito breeding ground.”

“It’s every man for himself since Foxy’s closed,” Ms. Tracy said. “The free meals only came out of there for two weeks after Irma.”

“We couldn’t continue to be an aid state,” she said. “We needed people to be buying their own food, and now that the barges are running they can.”

She broke off and stared off in the distance, pensive. Still, she admitted she was happy to see the turnout for the flotilla on Sunday, which brought back some of the dozens of boats that used to line the beach on a daily basis during the tourism season.

“Irma has really showed us just how interconnected we are to the yachting industry,” Ms. Zaluski said.

The island is teaming up with US-based International Rescue Group to use yachts to ship in more supplies.

“They need us and we need them,” Ms. Zaluski said of yachters.

In spite of the recent challenges, Ms. Zaluski refused to criticise the government response.

“Any response is going to start from the core and work its way out,” she said. “This thing was so far out of anyone’s control — beyond what anyone could imagine — that almost any response would be inadequate.”

She said many residents don’t realise private efforts are not in competition with each other.

“The fact is, private enterprise can do things the government can’t do,” Ms. Zaluski said. “And the DDM has reached out to NGOs like ShelterBox, [which delivered 23 tents to the island]. They embrace these approaches. Private citizens responding does not supplant government.”

As if to exemplify that, Mr. Miller, along with Alexia Lucas of Virgin Motor Yachts, spent the Sunday flotilla making a video to advertise to the world that JVD is still a viable tourist destination.

“All right everybody,” Ms. Lucas said, herding bikini-clad visitors into camera range. “Get into the water and shout: ‘Our water is still blue, our beaches are still golden!’”

Just being alive has given many residents something to shout about.

“Jost has always been a small island,” Ms. Callwood pointed out. “We are used to having limited resources, and it’s always been really resilient. If there’s any place in the world that can cope with this, it’s us.”